Same song, second verse. The Broncos lost 33-39 in Indy last year during Peyton Manning’s much dissected return home and it apparently was a bit much even for old Peyton. Time to set things straight playing on the home turf this time. Too bad this wasn’t a Monday night game.

Very few changes coming into 2014 for the Colts who enter another year of Pep Hamilton’s offense. The Colts ended up 11-5 last year to win the division but were 5-3 in road games. The only notable personnel change was bringing in Hakeem Nicks from the Giants to man the outside along with Reggie Wayne who has opted to become timeless in his return from a blown out knee at the age of 36. He’s not only the oldest starting wide receiver, he’s looked great in camp so far.

In 2012, Wayne turned in 106-1355-5 during Luck’s first season and was playing well last year before the injury. He can still add a possession role to the offense where his speed is much less of a factor but his chemistry with Luck remains strong. Nicks was as good as 1192 yards back in 2011 but tailed off his last two years in New York (not unlike the entire team). Nicks hasn’t really impressed anyone in Indy yet so expectations are not that high for him so far.

T.Y. Hilton turned in a solid sophomore season with Luck when he ended 82-1083-5 during the regular season and then went off for 17 catches for 327 yards and two scores over the two playoff games. Hilton is only 5-9 and 180 lbs. so he remains in the slot but the Colts intend on passing more in 2013 after sticking to the ineffective rushing game last year. Better passing means easier running. Or at least better passing. Hilton was held to only 27 yards on two catches versus the Broncos last year. Reggie Wayne managed 50 yards on five catches.

Luck threw for 228 yards and three scores on the Broncos last time. He’s tended to throw for more in road games where the Colts have to catch up on the scoreboard.

Donald Brown left for the Chargers and that leaves Trent Richardson mostly alone in the backfield. Granted, Ahmad Bradshaw remains but he’s been injury prone his entire career and comes off a neck injury that forced him to miss 13 games last year. Richardson was acquired in trade from the Browns and simply wasn’t worth much at all. Richardson remains the pricey starter despite posting only 2.9 yards per carry on his 157 runs last year. He scored seven times as a runner thanks to an otherwise effective offense getting near the goal line.

The Colts claim that Richardson is all better and learning his playbook and that he should be much improved. He only managed 3.6 yards per carry with the Browns. He had a slow start in training camp. Until Bradshaw is installed as the starter, Richardson will be given every chance to make good on his position.

MATCH TO THE DEFENSE: The Broncos were solid against the run in 2013 but that was mostly a function of being so far ahead that opponents just did not run. Only one running back had more than 20 carries in a game against the Broncos. Richardson on the road against the team that held him to 37 yards at home is not appealing. Luck, Wayne and Hilton are likely every week starters though and should see success this time facing the Colts. Expecting the Colts to want to win big, it should move this to an aerial war with nice results.

Close never hurt so much. The Broncos steam rolled their way through the league until the Seahawks just plain made them look ordinary in the Super Bowl. For a team with aging stars, time is of the essence and close just doesn’t count. The same scheme and team return other than Knowshon Moreno moved on and the Broncos put their trust in Montee Ball. Also Eric Decker left and was replaced by Emmanuel Sanders. In the end, it is all going to be about #18. This week, it is all about correcting that embarrassing loss in Indy last year.

Peyton Manning threw for 386 yards and three scores in Indianapolis last year. That was about his average game during his record-setting 2013 season. Manning never failed to throw a touchdowns and just twice fell below 295 pass yards. Back at home he is a very, very safe start in this game.

Montee Ball lays claim to the backfield with less expectations that C.J. Anderson or Ronnie Hillman steps up to take over the 120 carries Ball had. combined with Moreno, the duo ran for around 1600 yards and 14 touchdowns and 700 yards with three scores more as receivers. Ball should get a nice chunk of that this year. The Broncos gained 65 yards on 19 runs and scored once on the Colts with a Moreno run last year.

Demaryius Thomas (92-1430-14) remains the primary threat for receivers but the addition of Wes Welker (73-778-10) wasn’t quite as prolific as expected and the Broncos are going to let the 33-year old wideout leave in free agency next year. Emmanuel Sanders replaces Eric Decker and there is plenty of optimism that Sanders will be the next receiver who turns into gold catching Manning passes. Decker merely ranked up 24 scores and over 2300 yards over his last two seasons playing in Denver with Manning.

Decker ended with 150 yards and a score on eight catches while Thomas went for 82 yards and a touchdown on his four receptions versus the Colts last year. Welker totaled 96 yards on seven catches in that game.

Welker was just suspended for four games because of violating the drug policy about amphetamines. His suspension begins this week. His absence will see Andrew Caldwell taking up the slack along with Cody Latimer. That will be the most interesting aspect of the offense to watch though with so many weapons, Manning hardly needs to rely on Caldwell or Latimer much.

Julius Thomas went from seven career catches and none in 2012 to opening the year with 110 yards and two scores in the first game. Decker was much more productive in the first half of the season but remains one of the premier tight ends if only because of Manning.

Thomas scored once on his five receptions for 41 yards in Indy.

MATCH TO THE DEFENSE: It doesn’t matter really. Manning, Ball, Sanders, Thomas and Thomas all need to start every week. At home in a motivated game expect nice numbers all around. The most notable will be how often and how exclusively do they use Montee Ball as a runner. 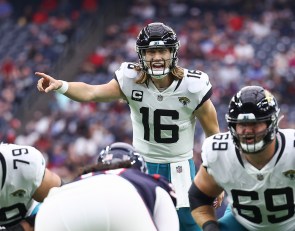