Given the diverse scoring systems and sizes of fantasy leagues, producing a weekly list of free agents that satisfies the masses can be challenging. For the most part, the column will hone in on players who are available in at least 35% of all fantasy leagues. If you play in a small league (8 teams), chances are there may be better players to pick up than you see listed here. If you play in a large league (16 teams), the majority of the players highlighted may already be on a squad; however, expect to find hidden gems, as well.

Ryan Tannehill, Dolphins
Tannehill was completely shut down for most of the game last week by the Rams defense until leading two late touchdown drives in the fourth quarter. He finished with 172 yards, two scores and an interception. Tannehill will find the going much easier this week when he takes on the 49ers Swiss cheese defense. Jay Ajayi will see plenty of work against the NFL’s last ranked rush defense but the good thing about the 49ers is they stink at defending the pass too. Tannehill has thrown two touchdown passes in each of the last two games. He should have one of his best fantasy performances of the year this week.
Availability: Owned in ~ 15% of leagues.
FAAB: $
Forecast: Tannehill is a streaming option this week vs. the 49ers.

On the Radar: No one

Mike Gillislee, Bills
LeSean McCoy left Sunday’s game with a dislocated thumb that required surgery. Gillislee replaced him and ran for 72 yards on 14 carries. The Bills insist McCoy will be ready to play this week against the Jaguars. If he can’t go, Gillislee will get the start and be a RB2 in a favorable matchup. However, even if McCoy does start, Gillislee is a wise pickup right now for those owners planning ahead for the playoffs. McCoy has already dealt with a hamstring injury and now he’s had surgery on his thumb. Gillislee has performed well whenever he’s been given an opportunity this year. He’s averaging 6.0 yards per carry and Gillislee has scored five touchdowns on the season. Gillislee would be a big fantasy asset if becomes the lead back in Buffalo’s offense.
Availability: Owned in ~ 25% of leagues.
FAAB: $$
Forecast: Gillislee is a handcuff for fantasy playoffs.

Tim Hightower, Saints
Mark Ingram left last Thursday night’s game against the Panthers with a concussion. Hightower took over as the lead back. He carried the ball 12 times for 69 yards. Hightower also caught eight balls for 57 yards. If Ingram isn’t cleared in time for Sunday’s game against the Rams, Hightower will get the start. Even if Ingram is cleared, Hightower should still be owned in a majority of leagues right now. He’s received double-digit carries in three of his last four games. After the Rams, Hightower gets favorable matchups against the Lions, Buccaneers, Cardinals and Buccaneers again to close the fantasy season. If you’re looking ahead to the playoffs, Hightower is a running back to consider even beyond this week.
Availability: Owned in ~ 50% of leagues.
FAAB: $$
Forecast: Hightower is an RB2/Flex option if Ingram is out this week.

Wendell Smallwood, Eagles
The Eagles lost both Ryan Mathews (MCL sprain) and Darren Sproles (ribs) to injuries Sunday. Smallwood served as the lead back against the Seahawks once Mathews and Sproles went out. He carried the ball 13 times for 48 yards and also caught four passes for 31 yards. Mathews is likely to miss Week 12 with an MCL sprain so even if Sproles plays, Smallwood is in line for a heavier workload against a Packers defense that’s a dumpster fire right now. Smallwood is one of the top adds this week given the Eagles uncertainty at running back.
Availability: Owned in ~ 2% of leagues.
FAAB: $$-$$$
Forecast: Smallwood is a low-end RB2 with Mathews out.

James Starks, Packers
Starks remains one of the most below-average runners in NFL history. Against the soft Redskins defense Starks rushed nine times for 25 yards. He’s now averaging 2.5 yards per carry on the year. Starks did score a receiving touchdown for the second straight week. He’s contributing in the passing game with eight receptions in the last two games. The Packers signed Christine Michael but right now Starks is seeing the most touches in Green Bay’s backfield. That’s not saying much but Starks is a touchdown-dependent Flex option this week against the Eagles.
Availability: Owned in ~ 50% of leagues.
FAAB: $-$$
Forecast: Starks is on the Flex radar in PPR leagues.

Rex Burkhead, Bengals
Giovani Bernard is out for the year with a torn ACL. Jeremy Hill will take over as the lead back but he’s not much of a receiver. Hill has nine receptions this season, compared to Bernard’s 39. Hill will certainly play more snaps now but with Bernard and A.J. Green both sidelined, Burkhead could carve out a role as a receiver out of the backfield. He’s someone to watch.
Availability: Owned in ~ 1% of leagues.
FAAB: $
Forecast: Burkhead is a depth stash in deeper PPR leagues.

DeVante Parker, Dolphins
As stated above, the Dolphins offense didn’t do much for much of the game versus the Rams but Parker was Tannehill’s favorite receiver for the second game in a row. He caught 8-of-10 targets for 79 targets and a touchdown on Sunday. In his last two games, Parker has 13 receptions for 182 yards and a touchdown. The Dolphins are a run-first offense but Parker is emerging as Tannehill’s top target. Parker should continue to stay hot Sunday when he faces the 49ers awful defense. He’s on the weekly WR3 radar.
Availability: Owned in ~ 45% of leagues.
FAAB: $$-$$$
Forecast: Parker is a weekly WR3.

Tyler Boyd, Bengals
Boyd hasn’t made much of a fantasy impact in his rookie year after showing flashes during the preseason. That could change now that A.J. Green is expected to miss significant time with a hamstring injury. The Bengals are decimated by injuries right now on offense. Boyd caught six passes for 54 yards and a touchdown Sunday. He did most of his damage once Green went out. Boyd and Brandon LaFell will both have a much bigger role in the Bengals offense going forward but Boyd has more fantasy upside. He’s one of the top waiver wire targets this week.
Availability: Owned in ~ 5% of leagues.
FAAB: $$$
Forecast: Boyd will emerge into a consistent WR3 over the final month.

Sammy Watkins, Bills
Watkins was dropped in a majority of leagues when he was placed on IR but there’s a chance he could return soon. He’s eligible to come off IR this week. Watkins still hasn’t been cleared to practice but even if he’s not ready for Sunday’s game against the Jaguars, there’s reason to believe he’ll be available for fantasy playoffs. Now, will Watkins stay healthy long enough to help fantasy owners? That’s another question but he’s worth a roll of the dice at this point in the season. The Bills have absolutely no receivers right now. Robert Woods got hurt on Sunday, which means the newly signed Percy Harvin is now Buffalo’s No. 1 receiver. Watkins will be a target monster if he’s healthy down the stretch.
Availability: Owned in ~ 30% of leagues.
FAAB: $$
Forecast: Watkins will be a WR2 for fantasy playoffs if activated off IR.

Tajae Sharpe, Titans
Marcus Mariota remains one of the hottest quarterbacks in the NFL and Sharpe is starting to reap some of the benefits. Sharpe has at least 58 yards receiving in his last three games and he’s scored in two straight. He’s not winning owners fantasy games yet but if you play in deeper leagues and are looking for a receiver or flex play, Sharpe is starting to come on. He’s been targeted 19 times in the last three games. Sharpe faces a Bears defense this week that Mariota will be able to exploit through the air. With Rishard Matthews owned in close to 70 percent of leagues now, Sharpe is worth a look if you need a starting receiver in deeper formats.
Availability: Owned in ~ 12% of leagues.
FAAB: $
Forecast: Sharpe is a WR4 for Week 12.

Zach Ertz, Eagles
There was no greater mismatch in the NFL this year than the Eagles receivers versus the Seahawks secondary. At one point in the game, Russell Wilson had more receiving yards than any Philadelphia wideout. Outside of Jordan Matthews, Ertz is really Carson Wentz’s only consistent weapon in the passing game. Ertz scored his first touchdown of the season on Sunday. That’s still a problem. Ertz only has three touchdown catches in the last two years. However, he does have 20 catches on 26 targets in his last three games. He’ll be a low-end TE1 for the rest of the year.
Availability: Owned in ~ 50% of leagues.
FAAB: $$
Forecast: Ertz is a low-end TE1.

Austin Hooper, Falcons
Jared Cook is going to be a hot pickup this week after his big game against the Redskins. Cook is wildly inconsistent though. That will likely be his best game of the season. Instead of overpaying for Cook, give Hooper a shot. Jacob Tamme is out for the season, so Hooper is going to see a lot more playing time over the final month. Hooper has a couple of tough matchups coming up against the Cardinals and Chiefs but Matt Ryan has been targeting the tight end in the red zone this year. Hooper has already been targeted four times in the red zone with one touchdown. Tamme was been targeted 11 times with three scores. Hooper should become one of Ryan’s top red zone targets now that he’s the starting tight end. Cook is worth a look too but don’t overpay for him. How many times can one player burn fantasy owners?
Availability: Owned in ~ 5% of leagues.
FAAB: $
Forecast: Hooper is a streaming option this week and for the rest of the year.

Matt Bryant, Falcons
Bryant has been one of the most consistent fantasy kickers this year. He leads all kickers in fantasy points but surprisingly Bryant is still available in almost half of leagues coming off a bye. He’s hit three field goals in three of his last four games. The Falcons offense gives Bryant plenty of scoring opportunities and the Cardinals defense is starting to wear down. Bryant is a top play again this week.
Availability: Owned in ~ 55% of leagues.
FAAB: $
Forecast: Bryant is a top play for Week 12.

Buffalo Bills
The Bills defense has been hit or miss for fantasy purposes this year. They have a good chance to hit big this week against Blake Bortles and the Jaguars. Jacksonville ranks in the Top 10 when it comes to allowing points to team defense. Blake Bortles has thrown 13 interceptions this year and traditionally, Rex Ryan’s defenses eat up bad offenses. The Bills have 31 sacks on the season. Bortles should be under heavy pressure all afternoon leading to turnovers. Buffalo’s defense is a strong streaming option this week against an offense on life support.
Availability: Owned in ~ 40% of leagues.
FAAB: $
Forecast: The Bills are a Top 10 defense this week.

Tennessee Titans
The Bears offense is in shambles right now. Alshon Jeffery is suspended. Zach Miller is out for the year. Jay Cutler suffered a shoulder injury and now he may be out for the year too. The Titans aren’t usually a great fantasy defense but this week should be the exception. The Bears offense is a sinking ship right now. Take advantage of the wreckage.
Availability: Owned in ~ 15% of leagues.
FAAB: $
Forecast: The Titans are a strong streaming option this week vs. the Bears. 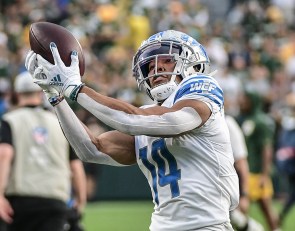 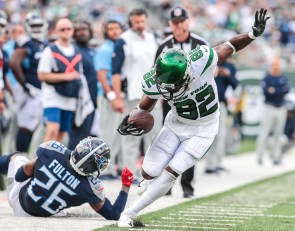 Check out where your roster options fit into our Week 7 start/bench tiers.

All of the notable movers and shakers adjusted as we enter Week 7.