If you started someone from this game you likely ended up disappointed. Ravens K Justin Tucker was the star. He connected on 4-of-4 field goal attempts, including three from beyond 50 yards. Tucker is the only kicker in the NFL to not miss a kick this year.

Extra Points: Tyler Eifert was the one other player that really paid off for fantasy owners. Eifert caught 5-of-11 targets for 68 yards and a touchdown…With A.J. Green injured, the Bengals passing game predictably struggled. Tyler Boyd saw the most targets (9) but finished with a modest five receptions for 62 yards…If the Ravens were attempting to get a perfect time share in their backfield, they accomplished it in this game. Kenneth Dixon carried the ball 13 times for 49 yards, while Terrance West saw 13 carries for 48 yards.

LeSean McCoy had surgery on his dislocated thumb Monday. It didn’t slow him down Sunday. McCoy rushed for 103 yards and two touchdowns on 19 carries (5.4 YPC). He also caught two passes for 31 yards.

Extra Points: Sammy Watkins was activated off IR and made an immediate impact. Watkins caught three targets for 80 yards, including a long reception of 62 yards. Look for Watkins to get more involved in the offense in the next couple of weeks…Chris Ivory was on his way to having a big day (44/1) before leaving in the first quarter with a hamstring injury. T.J. Yeldon replaced him but he’s been dealing with an ankle injury, so it was Blake Bortles who led the Jaguars in rushing. Bortles ran eight times for 81 yards…Allen Robinson disappeared again after having a big game last week. Robinson caught just 2-of-4 targets for 24 yards.

Extra Points: Rishard Matthews (3/64/1) caught another touchdown pass. Matthews has seven touchdown receptions on the season. He’s caught a touchdown in six of his last eight games…DeMarco Murray has been dealing with a toe injury. He was held to just 43 yards on 17 carries (2.5 YPC). It was rookie Derrick Henry who led the Titans in rushing. Henry ran for 60 yards and a touchdown on eight carries (7.5 YPC)…Matt Barkley started for the injury-riddled Bears and almost led Chicago to a comeback win. Barkley completed 28-of-54 passes for 316 yards with three touchdown and two interceptions…Barkley’s favorite receiver was Marquess Wilson. Wilson caught eight balls for 125 yards and a touchdown on a team-high 11 targets.

Philip Rivers was on fire Sunday. He completed 22-of-30 passes for 242 yards with three touchdowns and an interception. The Chargers defense did the rest, picking off Brock Osweiler three times, as the Chargers dealt Houston its first home loss of the season.

Extra Points: Tyrell Williams and Dontrelle Inman were targeted a combined 20 times. Inman caught six passes for 119 yards and a touchdown, while Williams finished with eight receptions, 70 yards and a score. Williams left the game late with a shoulder injury…Melvin Gordon was held in check by the Texans defense. Gordon ran for 70 yards on 17 carries (4.1 YPC)…Osweiler is holding the Texans skill players hostage right now. DeAndre Hopkins once again disappointed with five catches for 70 yards. Meanwhile, Lamar Miller only managed 57 yards on 19 carries (3.0). The Texans have a big quarterback problem, only months after giving a quarterback $72 million.

The Cardinals are having a disappointing season but David Johnson continues to be a stud regardless of game flow. Johnson was eating up yards on the ground early, finishing with 58 on 13 carries (4.5 YPC). Once the Cardinals fell behind, Johnson used his pass catching skills to haul in 8-of-11 targets for 103 yards and a score.

Extra Points: Larry Fitzgerald caught all four of his targets but was held to just 53 yards. Johnson dominated touches on the day and ended up being the only Cardinal with any fantasy value in the game…Tevin Coleman returned from a hamstring injury and scored but only saw 10 touches…Devonta Freeman carried the ball 16 times on the day and while he was held to just 60 yards, Freeman did score twice…Julio Jones was quiet with four catches for 35 yards. It was Taylor Gabriel who was Matt Ryan’s leading receiver on Sunday. Gabriel caught 4-of-5 passes for 75 yards and two touchdowns.

The Giants promised to move Odell Beckham around and get the ball in his hands in different ways. They delivered on that promise Sunday. Beckham caught 6-of-11 passes for 96 yards and two touchdowns against the Browns.

Extra Points: Beckham made up the majority of the Giants offense. No one else caught more than two passes and Rashad Jennings was held to 55 yards on 15 carries (3.7 YPC)…Terrelle Pryor was once again the Browns lone fantasy bright spot. Pryor caught 5-of-12 targets for 131 yards…Corey Coleman (3/38/1) caught his first touchdown pass since Week 2. Injuries and erratic quarterback play has limited Coleman’s fantasy value. He should be a much bigger factor in 2017.

Extra Points: Jay Ajayi didn’t have the game fantasy owners were hoping he would against the NFL’s last ranked rush defense. Ajayi rushed for just 45 yards on 18 carries (2.5 YPC). He did score once…Colin Kaepernick had a huge day throwing for 296 yards with three touchdowns and one interception. Kaepernick also ran for 113 yards on 10 carries. It was by far Kaepernick’s best fantasy performance of the season…Carlos Hyde racked up 95 yards and a touchdown on 18 touches.

The Saints offense exploded on Sunday. Drew Brees threw for 310 yards and four touchdowns. He added a fifth score on the ground to cap off a huge fantasy day.

Extra Points: Mark Ingram and Tim Hightower split carries but it was Ingram who had the big numbers. He rushed for 146 yards and a touchdown on 14 carries (10.4 YPC). Ingram also caught a 21-yard touchdown pass…Michael Thomas bounced back from a down game by catching 9-of-10 targets for 108 yards and two touchdowns…Jared Goff only threw for 214 yards in his second start but he did toss three touchdown passes…Even in a great matchup, Todd Gurley managed just 89 total yards on 17 touches without a touchdown. He’s officially bench fodder.

Mike Evans caught two first quarter touchdowns and even though the Buccaneers didn’t score again, it was enough to shock the Seahawks Sunday. Evans finished with 8 receptions for 104 yards and the two scores on a team-high 10 targets.

Extra Points: Once again Doug Martin saw a heavy workload with 23 carries but only managed 87 yards (3.8 YPC). Martin’s schedule lightens up during fantasy playoffs with two games against the Saints and one versus the Cowboys…Russell Wilson surprisingly laid an egg against the much-maligned Buccaneers defense. Wilson threw for only 151 yards with no touchdowns and two interceptions. He did rush for 80 yards but it was a terrible overall fantasy day for Wilson…Thomas Rawls also disappointed as the lead back with just 38 yards on 12 carries (3.2 YPC).

Tom Brady missed two days of practice last week with a knee injury. He didn’t have his best performance against the Jets but Brady still finished with 286 yards passing and two touchdowns.

Extra Points: Rookie Malcolm Mitchell had his second good game in a row. After scoring his first NFL touchdown last week, Mitchell caught 5-of-7 targets for 42 yards and two more touchdowns…Rob Gronkowski was active but he was held without a catch. Gronk left the game in the second quarter with a back injury and didn’t return…Quincy Enunwa and Brandon Marshall each caught a touchdown. It was Enunwa though who had the big fantasy day. He caught all five targets for 109 yards and a score…Matt Forte had his worst game in a month. Forte gained just 27 yards on 13 carries (2.1 YPC).

Derek Carr injured his thumb and had to leave the game for a while but returned to lead the Raiders to a win over the Panthers in a wild shootout. Carr threw for 315 yards with two touchdowns and an interception.

Extra Points: Michael Crabtree only had five receptions for 32 yards in his last two games. He was Carr’s favorite receiver on Sunday catching eight balls for 110 yards on a team-high 13 targets…Cam Newton had one of his best games of the year. He threw for 246 yards and two touchdowns. He also added a rushing touchdown…Jonathan Stewart went over 90 yards for the first time since Week 8. Stewart rushed for 96 yards and two touchdowns on 17 carries (5.6 YPC)…Ted Ginn is good for a couple of big games a year. Sunday was one of them. Ginn caught four balls for 115 and a score.

Extra Points: Hill’s 10 targets ranked second to tight end Travis Kelce. Kelce was targeted 15 times. He caught eight for 101 yards…It was another average game for Spencer Ware. Ware plodded along for 64 yards on 17 carries (3.8 YPC). Ware hasn’t scored in his last four games…Trevor Siemian had a big game in a losing effort. Siemian threw for 368 yards with three touchdowns and no interceptions…Emmanuel Sanders eat up Chiefs cornerback Phillip Gaines. Sanders caught seven balls for 162 yards and a touchdown on a team-high 10 targets. 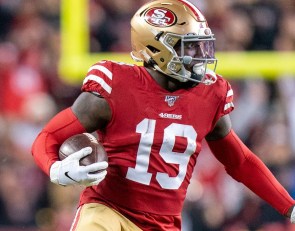 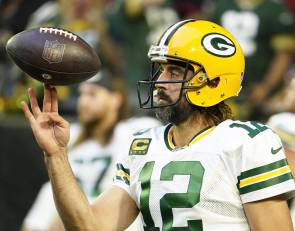 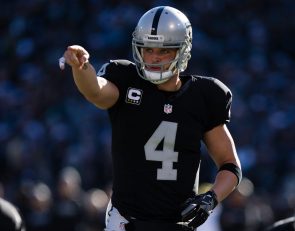