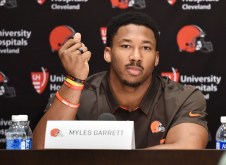 Last year I wasn’t very high on the incoming defensive linemen and normally I won’t be. Why? Well mainly because DL is a position that still takes 2-3 years for guys to really get up to speed with in the NFL and last year, specifically, situation didn’t do IDP owners any favors. I did say that Shaq Lawson would have been my DL1 last year had I known he’d be healthy enough to play and also be listed as a DE and not a LB. Well this year looks like he’ll get the DE designation and he should play so if you took my advice and SHH’d (Stash, Hold & Hope) him you should get some dividends back this year. Unlike last year, this year it appears that the dark side (3-4) didn’t steal all of the DE IDP values! In year’s past I’ve given Redraft and Dynasty outlooks on incoming rookies but not this year. Reason being is that if you are playing IDP you are very likely doing so in a dynasty format so that is how my advice will lean.

Cleveland is a great landing spot for Garrett. As the 1.1 he’ll clearly be a day one starter and with the Browns still working on their offense he’ll see the field a ton. Playing in Gregg Williams’ aggressive defense is also a huge plus. He may not hit DL1 value this year but at a minimum he’s an every week starter in a start 2 DL league. And no, I won’t be shocked to see him break double digit sacks this year.

After Garrett the value for 2017 is spotty at best but there are some players that will contribute, just not consistently.

If you are an Eagles fan or one of the 100,000,000,000 fans that watched the NFL Draft then you know why I have Reggie White crossed out in front of Barnett. With that said, Barnett landed in a great spot playing with what looks to be a formidable front in Philadelphia. As I write this I’m thinking I have him lower than he should be and I probably should move him up above both Taco and Takk. My biggest concern is going to be the type of rotation he gets used in for 2017. In the following years he should blossom into a solid DL1 with top five upside.  Yeah, he should be listed behind Garrett and in front of everyone else. Bumping him up.

I debated back and forth on if I would have Taco listed after Garrett or McKinley. Both have warts but I feel a bit better about Charlton since I know he’s healthy. My biggest concern isn’t Charlton’s talent but how many snaps he’ll see in his rookie year. The Cowboys don’t exactly have a murderer’s row at DE but they have the makings of a decent rotational base, which of course does include Taco. He’ll provide spotty fantasy value in 2017 but in the year’s to come he should provide solid DL2 type production.

I really like what Dan Quinn is doing with the defensive in Atlanta. The combination of Vic Beasley and Takkarist McKinley should be a lethal one for the Falcons. A shoulder injury is my biggest concern for Beasley in 2017. Playing opposite of Beasley should afford him plenty of one on one opportunities to get to the quarterback. I loved his passion at the draft but that same passion could also be his biggest downfall. He’ll need to learn how to harness all that energy because if he loses his cool one too many times, it’ll cost him playing time.

Location, location, location. It’s true in real estate and it’s true in fantasy football. But instead of location it’s all about scheme on the IDP side of things. Well that and opportunity, opportunity is huge. The problem with ranking Thomas right now is not knowing exactly what role he’ll play for the Niners. With that said, he should have plenty of opportunities to rack up tackles against for a defense that likely spends quite a bit of time on the field this year. He won’t present you with DL1 numbers but he could very well be a solid fringe DL2 this year and of course he has DL1 upside for 2018 and beyond.

The Dark Side lost, the Dark Side lost! This time chalk one up for the good guys as OLB Charles Harris will be listed as a DE for the Dolphins. With Cameron Wake on the downside of his career Harris can learn from one of the better pass rushers of the past decade and eventually take the Wake’s spot as Havoc Wreaker for the Dolphins DL. Harris may be the future but he’s not the here and now. He’ll have a roll but I don’t see it being big enough to make him a reliable fantasy starter.

Allen, if healthy should prove to be a very nice draft selection for Washington. But health is a question and why he fell in the draft. Unfortunately for IDP owners, he’ll present much better NFL value to Washington than he will fantasy value for IDP owners. Even SHH doesn’t apply for Mr. Allen.