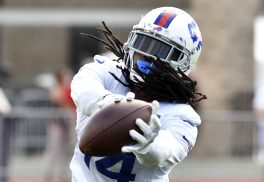 Training camps are in full swing and preseason games are right around the corner. While it’s great to see football finally back, unfortunately that also means injuries. The injuries piled up during the first week of training camp. Here’s the status of players with the most interest to the fantasy community.

Teddy Bridgewater, QB Vikings – As expected, the Vikings placed Bridgewater on the active/PUP list. Bridgewater is still recovering from the devastating knee injury he suffered last summer. He’s a strong candidate to begin the season on the reserve/PUP list, which would cost Bridgewater the first six games of the year. Sam Bradford will start the season as the Vikings quarterback and barring injury or poor play, remain under center all of 2017.

Joe Flacco, QB Ravens – Flacco suffered a disc injury in his back while weight lifting. The initial diagnosis had Flacco missing anywhere from 3-6 weeks. However, Flacco said he’s just dealing with some stiffness and that he only hopes to miss a week of practice. Flacco also said there’s no reason to believe he won’t be back on the field before the start of the regular season. The Ravens better hope so. Ryan Mallett has taken over for Flacco and is having a miserable training camp. If Flacco is out for an extended period of time, Colin Kaepernick is a possibility for the Ravens.

Andrew Luck, QB Colts – Luck opened camp on the active/PUP list while he recovers from shoulder surgery. He’s started a throwing program but the Indianapolis Star expects Luck to miss the entire preseason. The Colts are still cautiously optimistic Luck will be in the starting lineup when Indianapolis faces the Rams Week 1. Fantasy owners who draft Luck will need to be prepared in case Luck misses time early in the season. He currently has an ADP of Round 7.

Cam Newton, QB Panthers – Newton was throwing to teammates during the first week of training camp after having offseason shoulder surgery. He wasn’t making any deep throws but Newton said his shoulder felt good with the work he did. Newton looks to be progressing on schedule and should play at some point this preseason. The Panthers are installing a new offense this year that keeps Newton in the pocket more with the hope he takes fewer hits. After burning fantasy owners last year, Cam is being drafted in the Round 10 area this summer.

Jay Ajayi, RB Dolphins – Ajayi left Monday’s practice and was being evaluated for a concussion. If he did suffer a concussion, Ajayi will be held out of practice until he passes the league protocol. The potential setback doesn’t impact Ajay’s current Round 2 ADP.

Giovani Bernard, RB Bengals – Bernard avoided the active/PUP list after tearing his ACL in Week 11 last season. Not only did Bernard avoid the active/PUP list, early reports from Bengals camp have all been overly positive about him. As long as Bernard is healthy, his role in the Bengals’ offense is secure. He’s going to be the change-of-pace back and catch his share of passes. Rookie Joe Mixon and Jeremy Hill will battle for early down touches. Hill could end up being the odd man out as the year goes on. His play has declined the last two seasons. Expect Bernard’s Round 14 ADP to rise.

Devontae Booker, RB Broncos – Booker fractured his wrist and is expected to miss 6-8 weeks. The Broncos are hoping Booker will be ready for Week 1 but the injury now kills any chance Booker had of pushing C.J. Anderson for the starting job. Anderson, Booker and Jamaal Charles will all fight for touches in the Broncos backfield this season. Booker still has some value as a late-round flier in deeper re-draft leagues.

Latavius Murray, RB Vikings – Murray was placed on the active/PUP list while he still recovers from offseason ankle surgery. There’s no timetable for his return. Rookie Dalvin Cook has the inside track to be the Vikings starting running back but Murray is still expected to have a role in the offense assuming he can stay healthy. The Vikings struggled to run the ball inside the red zone last year. The 230-pound Murray scored nine touchdowns from inside the five-yard line with the Raiders in 2016. Even if Cook is the starter, Murray will still have fantasy value as Minnesota’s goal line back. He currently has an ADP of Round 11.

John Brown, WR Cardinals – Brown injured his quad early in training camp. He’s expected to miss up to a week. The injury isn’t considered serious but it’s disappointing for a player who has had an issue of leg injuries in the past. Brown has been one of the stars of the Cardinals offseason but he needs to stay on the field to deliver big for fantasy owners. Brown is going in the Round 10 area on average this summer.

Julio Jones, WR Falcons – Jones was medically cleared to practice at the start of training camp. He had minor surgery to remove a bunion this offseason but it’s nothing serious. Jones is cemented as a first-round fantasy pick in all formats.

Jordan Matthews, Eagles – Matthews was limited by knee tendinitis early in training camp but he declared himself medically cleared late last week. Matthews could still miss some practice time to give his knee rest, although right now it doesn’t appear to be anything serious. Matthews had a disappointing 2016 season. He could end up benefitting from the Eagles signing Alshon Jeffery and Torrey Smith. Matthews is an intriguing late-round receiver with an ADP of Round 13.

John Ross, Bengals – Ross said he’s still not 100 percent after having shoulder surgery but he’s been cleared to practice. Expect Ross to be eased into practices after missing the Bengals entire offseason program. It’s doubtful the speedster makes a significant fantasy impact early in the year while playing behind A.J. Green, Brandon LaFell and Tyler Boyd.

Sammy Watkins, WR Bills – Watkins avoided the active/PUP list to start training camp and stated that his troublesome foot is close to 100 percent healthy. Watkins’ practice reps will be monitored and he won’t see much preseason work but barring a setback, he’ll be in the lineup for Week 1. Watkins is one of the most talented receivers in the NFL. Staying healthy is his only issue. He’s the ultimate risk/reward fantasy pick. Watkins is being selected in Round 4 on average so far this summer.

Mike Williams, WR Chargers – The Chargers announced on Sunday that Williams will not practice at all during training camp. The rookie is dealing with a back injury that could land him on the reserve/PUP list. There’s even a possibility Williams will miss the entire 2017 season. With Williams’ future in doubt, Tyrell Williams is looking mighty attractive at his Round 11 ADP.

Eric Ebron, TE Lions – Ebron suffered a hamstring injury during Sunday’s practice. Lions coach Jim Caldwell said it’s just a strain but any setback is alarming for a player who has missed time with injuries in each of his first three seasons. Ebron should see an expanded role in Detroit’s offense this year with Anquan Boldin gone. He just needs to avoid injuries. Ebron has an ADP of Round 13.

Tyler Eifert, TE Bengals –Eifert declared himself 100 percent healthy at the start of training camp. He had back surgery in December. Eifert has scored 18 touchdowns in his last 21 games. He’s a high-end TE1 when healthy but Eifert has had trouble staying on the field the last three seasons. Eifert is starting to pick up steam with his ADP rising to early Round 7.

Jordan Reed, TE Redskins – Reed started training camp on the active/PUP list with a toe injury. Redskins coach Jay Gruden said Reed may have also twisted an ankle while overcompensating for his toe issue. The injuries seem minor but nothing can be taken with a grain of salt when it comes to Reed. The ultra-talented tight end has missed 18 games over the last four years.