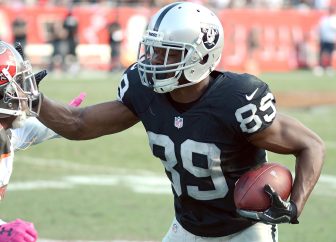 Are there keys or commonalities with Top-10 fantasy wideouts? Their stats have been on the rise for the last decade and in particular over the last four years.  In 2015, the Top 10 combined for 1,046 catches with the average topping 100 receptions for the first time. This position once begrudgingly filled the middle rounds of drafts but now commands a growing presence in the first two rounds.

To determine Top-10 status, I considered a standard scoring of 1 point per yard (rush or catch), six point touchdowns and one point per reception. I also did the analysis without reception points but the results were nearly identical.

Those scoring rules were used on every wide receiver to have caught a pass in the last twenty years. Overall, the findings were consistent between those players whose entire careers fell inside those boundaries and those that are still playing.

The spreadsheet showing all 927 and how they ranked since 1997 until 2016 can be downloaded here. It reflects the findings below and is a fun look back for those who have played fantasy football for many years.

Gone but not forgotten

Of the 601 that played their entire career between those years, only 33 ever turned in a Top 10 performance. That seems low at first glance and how it broke down is even more surprising.

Think about that. Over a 20 year period, there were only nine players that entered the NFL, produced three or more Top-10 years, and then retired. That’s nine of 601 players.  About three in every four of the Top 10 players never had more than two appearances. Most only reached the Top 10 once.

Inside of those careers, when did they reach the Top 10?

Also interesting is that of the 18 with a single Top 10, just five were also in the top five that year. Ten were no better than eighth. All of the eight with more than two Top 10s produced at least one year with a top three. Most receivers who end eighth, ninth or tenth in their first Top 10 will never have another. They simply had a big year unlike the others in their career. But there is no guarantee of a repeat regardless of where in the Top 10 they initially placed.

No surprise, but those players with the most Top 10 years also had the most top five years – and by percentage as well.  On average, any receiver with at least three Top 10s would have at least half of them qualify as top five. And those are truly difference making years. Randy Moss turned in seven and Calvin Johnson had four but no others produced more than three Top 5s. It is a rare group. The greater emphasis on passing actually makes it tougher to produce a top five year as there are more receivers with big talent and production.

Applying the past to the currently active players

There are 186 active wide receivers that caught at least one pass last year. There is the normal rookie dump after the NFL draft but they can be ignored for purposes of the Top 10. The only rookies with Top 10 performances were Randy Moss (1998), Stevie Johnson (2010), Anquan Boldin (2003), Odell  Beckham (2014) and Michael Thomas (2016). Rookie receivers are now thrown into a starting role instead of taking a year to learn the game. That means earlier breakouts will happen more in the future than it did in the past. Historically, the best rookie wideout would usually end up as thirtieth or worse. Not so much anymore.

Let’s breakdown the 186 current players for how they fit into the patterns.

The tendency is to highly value the most recent season and that certainly offers the best idea of what could happen for this year. But there is one reality with that.

Not eight. Never eight. Or seven or six. Just a couple of fives.

In fairness, there were many instances of ending up just outside the Top 10 the following year. And the reality is that wideouts are scoring more and the point differential between the 10th and 20th best wideout has never been smaller. In 2016 that was 33 points or about two points per game. Ten years ago it was 70 points. And there is a lot to say for consistency, track record, and predictability.

Which five will miss the top ten this year? Chances are it will happen. Larry Fitzgerald is the only one that seems certain not to return.

The NFL is a passing league that has matured. Defenses are starting to improve as they always do. What is good for fantasy football is that there are fewer dominating stars compared to the past because the position produces more players with higher points each year.

Nothing here mandates what will happen. Every player is unique and has to be evaluated individually. But understanding how the Top 10 has worked over the last two decades is just one more piece of information to consider.

Reception points have become the norm.  Make sure your fantasy team is getting more than their fair share.