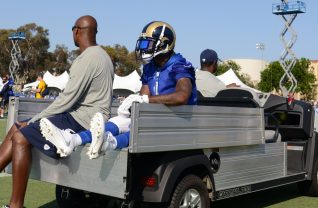 Training camps are in full swing and preseason games start this week. While it’s great to see football back, unfortunately that also means injuries. As usual, the injuries are piling up during training camp. Here’s the status of players with the most interest to the fantasy community.

Joe Flacco, QB Ravens – Flacco is still being held out of training camp while he recovers from a back injury. He got a second opinion that confirmed his injury is minor. The Ravens will obviously take it slow with their franchise quarterback but Flacco sounds like he’s on track to play Week 1. Shockingly, Ryan Mallett remains Flacco’s backup.

Andrew Luck, QB Colts – Luck is still recovering from shoulder surgery and has yet to practice. There was a report from CBS’ Jason La Canfora that Luck could begin the year on the reserve/PUP list, which would cost him the first six games. Colts General Manager Chris Ballard refuted that report saying Luck will be activated from active/PUP before Week 1. Either way, don’t expect to see Luck this preseason.

Cam Newton, QB Panthers – Newton is still doing only light throwing on the side at practice. He’s been limited by soreness in his shoulder. Newton had surgery this offseason to repair a partially torn rotator cuff. He won’t play much, if at all, this preseason but the Panthers are still expecting Newton to be under center in Week 1. He’s currently being drafted in Round 9 on average.

Ryan Tannehill, QB Dolphins – Tannehill reportedly tore the ACL in his left knee again when he was injured in practice last week. It’s clear he’ll miss the rest of the 2017 season because the Dolphins signed Jay Cutler out of retirement to a one-year deal. Cutler had one of his best real seasons under Adam Gase in Chicago when he was used more as a game manager. Expect the Dolphins to lean even more on Jay Ajayi this year with Tannehill injured.

Jay Ajayi, RB Dolphins – Ajayi suffered a concussion in practice and was expected to miss at least a week. It’s not a big issue for fantasy owners with the start of the season still a month away but it’s a concern any time a player gets a concussion. Ajayi currently has an ADP of early Round 2.

Matt Forte, RB Jets – Forte has missed over a week of training camp with a hamstring injury. It’s the second year in a row Forte has been sidelined with a hamstring issue in training camp. Now pushing 32, Forte will battle with Bilal Powell for touches in the Jets backfield. Powell has an ADP in Round 6, while Forte isn’t going off the board until the tenth round.

DeMarco Murray, RB Titans – Murray tweaked his hamstring last week in practice. He’s listed as day-to-day. The Titans have already stated the injury isn’t serious. Murray has battled minor injuries but he’s only missed one game over the last three seasons. The setback won’t impact his Top 15 ADP unless the injury lingers.

Latavius Murray, RB Vikings – The Vikings activated Murray from the active/PUP list. Murray missed the first two weeks of training camp while recovering from ankle surgery. He’ll likely miss the Vikings first preseason game but having Murray back for the regular season is a big boost to Minnesota’s running game. Even with rookie Dalvin Cook sitting atop the Vikings depth chart, Murray offers value with an ADP in Round 10.

Bilal Powell, RB Jets – Powell sat out Monday’s practice with a sore neck. The injury isn’t believed to be serious. The Jets should rely on Powell even more this season with the injuries to their receiving corps. Expect his Round 6 ADP to rise in the coming weeks.

Tavon Austin, WR Rams – Austin has been sidelined with a hamstring injury. Rams coach Sean McVay called the injury a setback after Austin missed all of minicamp recovering from wrist surgery. Austin is losing out on practice reps as the Rams transition to a new offense. He’s going in the later rounds of fantasy drafts.

Jamison Crowder, WR Redskins – Crowder is dealing with a hamstring injury. He’s listed as day-to-day. The Redskins haven’t said much about the injury but right now it sounds like a hamstring strain. Coming off a season where he caught 67 passes for 847 yards and seven touchdowns, Crowder currently has an ADP in late Round 5.

Corey Davis, WR Titans – Davis suffered a hamstring injury in practice and was expected to be out at least a week. He had an MRI last Thursday and while the rookie will miss important training camp reps, it appears Davis avoided a serious injury. Davis has an ADP of Round 10. He’ll battle Eric Decker and Rishard Matthews for targets this season.

Josh Doctson, WR Redskins – Doctson injured his hamstring in Sunday’s practice. Redskins coach Jay Gruden said the injury is a slight pull. He’s listed as day-to-day. Doctson missed most of his rookie year with an Achilles injury but by most reports he’s been having a great offseason. The injury is a setback and Doctson will likely miss the Redskins first preseason game at the very least. Doctson could start seeing his Round 12 ADP start to slip if he doesn’t get back on the field soon.

Quincy Enunwa, WR Jets – Enunwa was placed on injured reserve with a neck injury, ending his season. It’s a huge blow to the already thin Jets passing offense. Enunwa was the Jets clear No. 1 receiver entering the season. Robby Anderson will now take over as the Jets top receiver. The bottom line is on paper the Jets have one of the weakest group of receivers in recent memory. Stay away.

Will Fuller, WR Texans – Fuller broke his collarbone last week in practice. He’s expected to miss 2-3 months. That places Fuller’s return around Weeks 6-8. Fuller shouldn’t be selected in traditional fantasy drafts but he’ll be a waiver wire target during the season once he nears his return. Jaelen Strong and Braxton Miller will fill the void left by Fuller.

Alshon Jeffery, WR Eagles – Jeffery missed four practices with a minor shoulder injury but returned to practice on Saturday. He could sit out the Eagles first preseason game as a precaution. It’s not great news given Jeffery’s injury history but right now it’s nothing for fantasy owners to get overly concerned over. Jeffery is currently being selected in the late third/early fourth round area.

Donte Moncrief, WR Colts – Moncrief is dealing with a sprained AC joint in his shoulder. The Colts said it’s a mild sprain and listed Moncrief as day-to-day. Moncrief missed time last season with a broken shoulder blade. He has an ADP of Round 7 but currently both Moncrief and his quarterback, Luck, are injured.

Sterling Shepard, WR Giants – Shepard suffered a low ankle sprain. The injury was first believed to be more serious when Shepard was carted off the field. However, Shepard said he hopes to play at some point in the preseason. Shepard will operate as the Giants primary slot receiver this year with Odell Beckham and Brandon Marshall lining up on the outside. He offers some value with an ADP in the fourteenth round.

Sammy Watkins, WR Bills – Watkins left Sunday’s practice after tweaking his left ankle. He did return and then participated in team drills at Monday’s practice. It was a minor scare but any potential injury is news when it comes to Watkins. He remains the ultimate risk/reward fantasy pick with an ADP in the late third round.

Jordan Reed, TE Redskins – Reed is dealing with a toe injury he says has been bothering him since last season. He met with Dr. Robert Anderson in North Carolina last week. Redskins coach Jay Gruden said, “nothing earth shattering” came from the meeting. Consider Reed day-to-day until we hear an update. Reed is a risky fantasy pick considering his injury history. He currently has an ADP of Round 5.