Training camps and preseason games are underway. While it’s great to see football back, unfortunately that also means injuries. As usual, the injuries are piling up during training camp. Here’s the status of players with the most interest to the fantasy community. 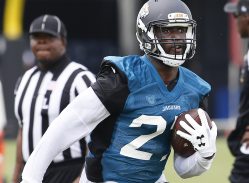 Cam Newton, QB Panthers – Newton participated in team drills on Sunday. Derek Anderson remained with the first-team offense while Newton was mainly limited to red zone work. It’s a step in the right direction for Newton as he recovers from offseason shoulder surgery. Newton is unlikely to play in the preseason but he’s on track to start Week 1.

Joe Flacco, QB Ravens – The Ravens announced Flacco won’t play in the preseason but that he’s expected to start Week 1 against the Bengals. Flacco is recovering from a back injury he suffered early in training camp. Unless there’s a setback in practice, expect Flacco to be under center versus the Bengals Week 1.

Andrew Luck, QB Colts – Luck is still sidelined as he recovers from offseason shoulder surgery. Colts owner Jim Irsay admitted Luck’s Week 1 availability is uncertain saying Luck would be back, “around the start of the season.” Luck has resumed throwing but owners need to plan that he may not be on the field for the first couple games. Luck’s Average Draft Position (ADP) is currently late Round 7.

Jay Ajayi, RB Dolphins – Ajayi is still dealing with a concussion and has yet to receive medical clearance. He’s waiting to be cleared by an independent neurologist. Ajayi has been in the NFL’s concussion protocol for over two weeks but his Round 2 ADP is holding steady.

Leonard Fournette, RB Jaguars – Fournette played in the Jaguars first preseason game but has missed practice since with a foot injury. Jaguars coach Doug Marrone already ruled out Fournette for the second preseason game. The injury isn’t believed to be serious but Fournette did have foot issues in college. Keep an eye on Fournette but right now there’s no reason to drop him from his Round 3 ADP.

Devonta Freeman, RB Falcons – Freeman left Sunday’s practice and is now in the NFL’s concussion protocol. The Falcons will take it slow in the preseason with the NFL’s new highest-paid running back but he has three weeks to get ready for the regular season.

Mike Gillislee, RB Patriots – Gillislee has been sidelined for two weeks with a hamstring injury. He was listed as the third-team running back on New England’s initial depth chart. While Gillislee is still expected to have a role in the Patriots offense this year, he’s being vastly over-drafted with a Round 5 ADP.

Bilal Powell, RB Jets – Powell missed the Jets preseason opener with a neck injury. The injury wasn’t believed to be serious but Powell has yet to return to practice. There’s a good chance Powell won’t play in the Jets next preseason game.

Matt Forte, RB Jets – Forte missed the Jets first preseason game with a hamstring injury. He continues to be absent at practice. Forte will be 32 this season and he’s coming off an injury-plagued 2016. There’s a chance that after a stellar career, Forte’s body is starting to break down.

Latavius Murray, RB Vikings – The Vikings activated Murray from the active/PUP list. He didn’t play in the Vikings preseason opener but Murray’s health is trending in the right direction. Dalvin Cook is the favorite to be the Vikings starting running back. Murray can still carve out a role as Minnesota’s short-yardage/goal line back. He has some value later in fantasy drafts with his Round 11 ADP.

Tavon Austin, WR Rams – Austin is dealing with a hamstring injury that could sideline him for the remainder of the preseason. He has missed all of mini-camp and training camp with injuries. Austin’s fantasy value has taken a big hit with the addition of Sammy Watkins and the development of Cooper Kupp.

Amari Cooper, WR Raiders – Cooper has been out of Raiders practice for a week with a leg injury. He missed the preseason opener but the injury isn’t considered to be serious at this point. Cooper’s ADP is still holding strong at Round 2.

Corey Davis, WR Titans – Davis is still week-to-week with a hamstring injury. He’s hoping to be ready by Week 1 but Davis is going to miss important practice time working with Marcus Mariota. Fellow rookie Taywan Taylor shined in the Titans first preseason game with Davis out.

Doug Baldwin, WR Seahawks – Baldwin missed the Seahawks preseason opener with a foot injury. He’s listed as day to day. Seahawks coach Pete Carrol said Baldwin is fine. He could sit out Seattle’s next preseason game but Baldwin is in no danger of missing Week 1.

Marqise Lee, WR Jaguars – Lee suffered a high-ankle sprain on Sunday. He’s expected to miss around four to six weeks. That would put Lee’s status for Week 1 in doubt. Rookie Dede Westbrook is likely to replace Lee if he misses time. Allen Robinson will eat up even more targets with Lee out of the lineup.

Jordan Matthews, WR Bills – Matthews injured his sternum in his first practice with the Bills. He has a chip fracture in his sternum. Matthews is listed as week to week and he’s not a lock to play in the opener versus the Jets. Rookie Zay Jones could open the year as the Bills No. 1 receiver. Jones’ ADP is Round 13 and rising.

Breshad Perriman, WR Ravens – Perriman missed the Ravens preseason opener with a hamstring injury. He’s been sidelined for over two weeks. It’s a new year, same story for Perriman who has been plagued by injuries his entire career. He’s listed as day to day.

Paul Richardson, WR Seahawks – Richardson suffered an AC joint sprain in his shoulder during the Seahawks first preseason game. Seahawks coach Pete Carroll said Richardson will be out for a bit. It’s bad timing for Richardson who was having a stellar training camp and had overtaken Jermaine Kearse on the depth chart. The Seahawks are hoping Richardson will be back for Week 1. He’s worth a late-round pick in fantasy drafts.

Mike Williams, WR Chargers – Williams is still out with a back injury. NFL.com’s Ian Rapoport reported that the Chargers are targeting an October debut for Williams. It’s still possible the first-round pick could land on the reserve/PUP list, which would cost him the first six games of the season. Williams remains a risky fantasy pick.

Jordan Reed, TE Redskins – Reed hopes to return to practice next week. He’s been sidelined for over two weeks with a toe injury. Reed said he would like to play at least one preseason game but conceded that will be up to the coaches and training staff. Reed is a risk/reward fantasy pick given his injury history. His current ADP is Round 5.