Fantasy players worth a reach in your draft

Fantasy players worth a reach in your draft

Every year owners pour over data to figure out where they should target players. The difference on draft day sometimes comes down to the owners willing to take certain players earlier than they’re projected to go. Here’s a list of players likely to outperform their ADPs. Don’t be afraid to reach for them when you’re on the clock.

Average Draft Position (ADP) is taken from Fantasy Calculator data as of August 17 and is based on a 12-team PPR league.

Thomas is being selected in the late first round/early second round area after a sensational rookie season that saw him put up 92 receptions, 1,137 yards and nine touchdowns. Despite playing in only 15 games and starting the year behind Brandin Cooks and Willie Snead for targets, Thomas finished 2016 as fantasy football’s No. 7 wide receiver. Thomas caught 77 percent of his targets and posted nine Top 30 fantasy weeks over his final 13 games. Drew Brees likes to spread the ball around but it’s hard to imagine Thomas will see much of a drop-off in production. He’s the complete package of size, speed, great hands and a precise route runner. Brees has thrown for at least 4,000 yards in 11 straight seasons and with Cooks gone, Thomas is set up for another big year. He’s well worth a first-round pick.

Gronk has an ADP in late Round 2 because of his injury history. Based on production, he’s a first-round draft pick. Gronkowski is one of fantasy’s ultimate risk/reward players. He’s missed 24 games over the last five seasons. That’s the risk. Gronk has finished in the top-five in touchdowns and fantasy points during the past four seasons where he’s appeared in at least 11 games. He’s scored at least 10 touchdowns in five of his seven NFL seasons. That’s the reward. Gronkowski is the one tight end that can win fantasy owners weeks on his own. His on-field dominance makes Gronk worth the risk of a second-round pick.

Crowell had a productive fantasy season despite playing for a one-win team in 2016. He rushed for 952 yards on 198 carries (4.8 yards per carry) and seven touchdowns. Crowell also caught 40 balls. The 40 receptions more than doubled his previous career high. Duke Johnson is still the Browns primary third-down back but Crowell has proven he can stay on the field in passing situations. Cleveland is projected to be a below .500 football team again in 2017. However, the Browns shouldn’t be quite as bad as they were last season when they fell behind early in a lot of games and had to scrap the run. Crowell’s numbers would have been even better but he had 10 carries or fewer in six games. With questions still surrounding the quarterback position, Crowell will remain the focal point of the Browns offense, especially inside the red zone. He’s a strong RB2. 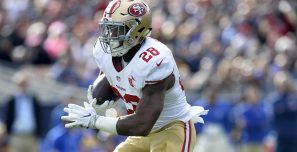 There was talk early on in camp that Tim Hightower and rookie Joe Williams would challenge Hyde for the starting job. That talk died down after Hyde has been one of the stars of 49ers training camp. Hyde has been plagued by injuries during his career but when healthy last season he rushed for 988 yards, scored nine touchdowns and averaged 4.6 yards per carry. He finished ranked 18th in fantasy points, despite playing just 13 games. Hyde’s ADP is Round 4 because of his injury past. If he can stay healthy, he’ll put up big numbers in Kyle Shanahan’s offense. Hyde offers RB1 upside in the fourth round. That’s worth a reach.

Diggs is coming off a year where he caught 84 passes for 903 yards on 111 targets in just 13 games. He did only score three times but overall it was an impressive second season for the Vikings receiver. Diggs recorded a 76 percent catch rate, which was fifth best among receivers. His lack of touchdowns is a concern – he only has seven in two years – although Diggs did catch at least five passes in eight games last season. He had two games with 13 receptions. Diggs finished as fantasy’s 31st receiver in 2016. The targets, catches and yards will be there. It’s not unrealistic to think Diggs can be a Top 20 fantasy wideout if a few more scoring opportunities come his way. He’s a strong fourth or fifth round selection.

Like Gronk, Eifert is going a round too low because of his injury history. To be fair, it’s a long history. Outside of his rookie year in 2013, Eifert has only been healthy for one NFL season. That year in 2015, Eifert caught 52 passes for 615 yards and 13 touchdowns. He’s a terror in the red zone. Over the last two years, Eifert ranks first among tight ends in touchdowns (18) and third in red zone targets (19). However, Eifert has missed 26 games over the past three seasons. Eifert is entering the final year of his rookie contract, so he’s hoping to cash in on a big payday. If Eifert can stay healthy, he’ll cash in big for owners who rolled the dice on him.

If you’re looking for the best value on the board, Garcon is your guy. Garcon is coming off one of the best seasons of his career. Last year with the Redskins, he caught 79 passes for 1,041 yards and three touchdowns on 116 targets. He caught 71 percent of his targets. Garcon is reuniting with Kyle Shanahan. The last time the two worked together in Washington, Garcon was targeted an NFL-high 184 times and caught 113 passes for 1,346 yards. Garcon has little competition for targets in San Francisco. He’s the 49ers unquestioned No. 1 receiver. Shanahan’s No. 1 receiver has led the league in targets three times (2009, 2013, 2015) and finished second once (2008). The downside with Garcon is touchdowns. He’s never scored more than six times in his nine-year career. Still, Garcon should be one of the league leaders in targets and receptions this year. Owners who can grab Garcon as a WR3 in PPR formats will be sitting pretty.

Kelley averaged 4.2 yards per carry as a rookie last season. Surprisingly though, Kelley has been undervalued all summer. His ADP has been hovering in the Round 8/9 area, while rookie Samaje Perine is going in Round 10. Until recently, Perine was going ahead of Kelley on average. This is a good example of a situation where fantasy owners want one guy to win the job but the Redskins coaching staff simply isn’t there yet. From Week 8 on last season, Kelley handled 74 percent of the Redskins designed running plays. He scored the 15th most fantasy points among running backs over the second half of the season. Kelley isn’t a dynamic runner but he’s consistent and he’s earned the trust of the coaching staff. Perine will have a role too but Kelley is the starter. He’s just not being drafted like one.

Williams burst onto the scene last year with 69 receptions, 1,059 yards and seven touchdowns on 120 targets. For some reason, fantasy owners still aren’t buying into Williams. His ADP is Round 9. Keenan Allen is returning and the Chargers selected Mike Williams in the first-round of the NFL Draft but Williams is out until at least early October with a back injury. There’s a chance we don’t even see the rookie this season. Williams brings a different dimension to the Chargers receiving corps because of his size (6-4, 205) and speed combination. He recorded at least 60 yards receiving in 11 games last season. There’s a belief by some that Williams’ usage will go down this year with Allen back. Don’t buy it. Williams is a steal as a WR3/4.

There’s been a lot of preseason hype surrounding Ty Montgomery but he’s already dealing with a leg injury. Williams is taking most of the first-team reps in his absence. There’s no denying Montgomery’s talents as a receiver. However, he hasn’t shown the ability to be an every-down NFL running back. Williams is a powerful inside runner who could push Montgomery for early down work. He rushed for 3,901 yards and 35 touchdowns in college. The other thing to note about Montgomery is in two games against the Bears last year, he rushed for 222 yards, caught 12 passes and scored twice. Against the rest of the NFL, Montgomery rushed for 235 yards, caught 32 passes and scored once. At the very least, Williams is a valuable handcuff on a high-scoring offense. If Montgomery struggles or gets hurt, Williams becomes a weekly RB2.

Prescott put up one of the best rookie seasons in NFL history. He was also money for fantasy owners. Prescott was fantasy’s sixth highest-scoring quarterback in 2016. He threw for 3,667 yards, 23 touchdowns and just four interceptions. Prescott also ran for six touchdowns, which led all quarterbacks. For all the “Dak and Dunk” talk, Prescott ranked fourth in the NFL in yards per attempt (8.0). There’s constant talk about Dak declining this season, especially with Ezekiel Elliott’s suspension looming. Even if Prescott suffers a slight decline, he’s still a starting fantasy quarterback. And who says he’ll decline at all? Either way, you’re getting a QB2 in Round 11 that plays on one of the better offenses in the NFL. Don’t let all the anti-Dak sentiment talk you out of value on draft day. Getting Prescott in Round 11 will prove to be a laugher at the end of the season.

Kamara’s ADP is Round 14 but he’s such a strong late-round selection, don’t be afraid to take him early. The Saints are going to have a backfield by committee with Kamara, Adrian Peterson and Mark Ingram. That’s obvious. However, Kamara’s role is already defined. He will be the Saints third-down/pass-catching back. Kamara is the most talented player at that position since Darren Sproles left. Sproles averaged 77 receptions in three seasons with the Saints and even Travaris Cadet caught 40 balls last year. Kamara was specifically targeted in the draft by Saints coach Sean Payton. He fits the offense like a glove. Kamara is an excellent receiver and underrated runner. The rookie caught 74 passes and averaged 6.2 yards per carry in two seasons at Tennessee. Kamara will have immediate PPR flex appeal and if Peterson or Ingram go down…watch out.