The fantasy football draft trends of 2017

The fantasy football draft trends of 2017

Fantasy football, like life, is always easier when you know what is going to happen. Nice to know that a certain stock will rise or that it is past time to replace that water heater in your attic. And it is good to know how you can make optimal positional picks in your fantasy draft.

Each new season is very tied into the previous one. Most drafters assume that last year repeats and draft accordingly. That means that drafts unfold in reliable ways and you can make better decisions about your roster. 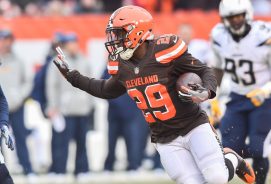 Let’s see what the 2017 trends are for the fantasy positions.

There are really only two flavors of league rules that matter here – can you start two of them? If so, then they will be going hot and heavy with likely the top 12 gone by the end of the third round if not earlier. For the majority of leagues, quarterbacks are both one of the highest scorers and one of the easiest positions to fill. In standard scoring, Aaron Rodgers, Matt Ryan, and Drew Brees were tops and yet differed in per-game score by only about one point. The delta between the No.4 and No. 16 was about three points per game.

How that usually shakes out in drafts is that someone takes Rodgers around the third round. Tom Brady goes next as a hat tip to the second half of the Super Bowl (and not so much from what he’s done career-wise). Then Drew Brees tags along in the fourth if not fifth round. The gates don’t really open until the sixth to eighth rounds.  Consider Matt Ryan as the key here. He usually leads the later run on quarterbacks. In most leagues, it just makes good sense to wait on a quarterback though grabbing a second one early is never a bad idea.

Trend Advantage: Waiting until the sixth to eighth round for a quarterback allows you to load up on running backs and wideouts with minimal if any penalty.

There is no disagreement on the top two –David Johnson and Le’Veon Bell. Ezekiel Elliott was third until the NFL stepped in with the suspension that may have resolution on August 29. He’s currently going near the start of the second round and will end up at the end of the first if the suspension is lowered to three weeks or so. Le’Veon Bell lasted to around that spot last year when he missed the first two games.

LeSean McCoy leads the group of DeMarco Murray, Melvin Gordon, Devonta Freeman and Jordan Howard. It is a repeat of the Top-10 of 2016 even though only half usually make it back.  Expect the third round to drain the Top 15. This is where the rookie backs typically go – Christian McCaffrey, Dalvin Cook, and Joe Mixon and also Isaiah Crowell and Ty Montgomery.

Quality extends out through the eighth round. Waiting on a running back can still produce players like Doug Martin, Frank Gore, Eddie Lacy, Rob Kelley, Derrick Henry, Adrian Peterson and Duke Johnson who all have upside though with risk. Many teams grab one back early and fill up on wideouts before returning to running backs from Rounds 6 to 8.

Trend Advantage: A Top-10 back offers much more consistency and lower risk than the rest. But they will only last until the middle of the second round. If possible, get one and then load up in the later rounds on the higher risk players.  Own three backs by the end of the seventh round if possible.

In leagues without reception points, wideouts are still taken in early rounds. The Top-10 is gone by the third round. With reception points,  there will be 12 to 14 already claimed. After the first two running backs are gone, the block of Antonio Brown, Odell Beckham, and Julio Jones goes next.  Not surprisingly, like running backs the Top-10 wideouts mirror the final rankings of the position for 2016.  Expect Mike Evans, A.J. Green, Jordy Nelson, Michael Thomas and T.Y. Hilton to go by the end of the second round. If you want a low-risk, high-reward wide receiver, you must take one by the second round.

This is the deepest fantasy position but also the one that generally requires the most starters each week.  Usually, your third wideout is still a starter and maybe even fourth in some leagues. Expect around six rounds to be at least half wide receivers. There are still excellent values by the fifth round with Larry Fitzgerald, Kelvin Benjamin, Jamison Crowder, Martavis Bryant and the like.

By the ninth round, the run on wide receivers will cool down with the position already raking in the Top-40 if not Top-50.  Tight ends and quarterbacks start to dominate then before wideout depth is addressed for the rest of the draft.

Trend Advantage: It is a passing league and wide receivers score well even without reception points.  It is a deep position but heavily raided early so not having two by the end of the fourth round means you need to get lucky with sleeper types.

The Top-10 tight ends of 2016 are also mirrored in 2017 drafts but in this case, it is even more reasonable since the position offers so few viable fantasy starters. Rob Gronkowski is healthy, again, and is usually taken in the second round. When healthy there is no comparing the advantage he offers. But the next one won’t go for another couple of rounds at best. Travis Kelce, Greg Olsen, and Jordan Reed go next usually around the fifth round. The sixth may grab Jimmy Graham and Tyler Eifert.  Round 8 is when the gates open up with most teams taking their tight end by the start of the tenth.

A reception point makes tight ends more relevant and drafted a bit earlier. But everyone needs one and once the starters for running back and wide receivers are secured, it makes sense to get value in a starting position.

Trend Advantage: Taking Gronk is great if he stays healthy but he impacts your other starters. Waiting until the seventh round still produces Hunter Henry, Kyle Rudolph, Martellus Bennett and Delanie Walker. Waiting on tight end doesn’t hurt nearly as much as missing earlier round running backs and wide receivers.

There is a new trend happening with leagues not using a kicker. I say “Bravo!” The final two rounds are littered with “sigh… a kicker” picks. Someone grabs Stephen Gostkowski early despite his No. 10 finish of last year. Kickers are the fantasy football equivalent of a prostate exam. You need one but you put it off. It happens and then you never want to talk about it again.

Trend Advantage:  None. And I feel like someone should buy me dinner.

This is not that different from kickers in that there is little consensus on the position and minimal advantage. They too get scraped up in the final two or three rounds.  The Broncos, Chiefs, Seahawks, Vikings, and Texans are the most popular and start around four or five rounds from the end. But the final two rounds contain most of the defenses.

Trend Advantage:  This is a starting position and spending an earlier pick on a starting defense makes more sense than taking your sixth wide receiver. Go look at what your Round 15 picks did last year. Why not try to get one of the best defenses – they’re still relatively cheap.