Training camps and preseason games are winding down. Unfortunately, the injury bug hit big just before the start of the season. Here’s the status of players with the most interest to the fantasy community. 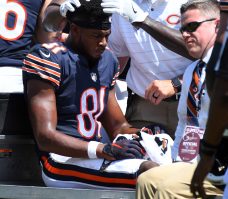 Joe Flacco, QB Baltimore Ravens – Flacco is still recovering from a back injury and hasn’t returned to practice. Ravens coach John Harbaugh said after Baltimore’s last preseason game that he promises Flacco will be back for Week 1. If Flacco isn’t healthy, the Ravens will be forced to start Ryan Mallett against the Bengals. That won’t be good news for fantasy owners who own Ravens players.

Andrew Luck, QB Indianapolis Colts – Luck still hasn’t been activated off the PUP list. The Indy Star’s Zak Keefer reported Luck’s shoulder will force him to miss Week 1 “barring a somewhat-miraculous turn of events.” Luck is likely to miss at least one game. Fantasy owners need to make other plans at quarterback early in the season.

Tyrod Taylor, QB Buffalo Bills – Taylor suffered a concussion in the Bills third preseason game. He’s been placed in the NFL’s concussion protocol. Taylor has struggled this preseason but Bills coach Sean McDermott said he remains Buffalo’s starter. If Taylor isn’t cleared before the opener, rookie Nathan Peterman will start against the Jets in a game where the first team to 10 wins.

Leonard Fournette, RB Jacksonville Jaguars – Fournette missed the Jaguars third preseason game with a foot injury but returned to practice on Saturday. The team is likely just being cautious with its first-round pick even though Fournette did deal with some foot issues at LSU. Fournette is expected to be ready for Week 1.

Devonta Freeman, RB Atlanta Falcons – Freeman missed the Falcons third preseason game with a concussion but returned to practice on Monday. He’s all systems go for Week 1. If you haven’t drafted yet, Freeman is locked in as a Top 15 pick.

Jeremy Hill, RB Cincinnati Bengals – Hill exited the Bengals third preseason game against the Redskins with an ankle injury. There was no update on the injury at the time this article was published. If Hill is out for an extended period of time, it will open the door for rookie Joe Mixon to have a big early season workload.

Spencer Ware, RB Kansas City Chiefs – Ware tore his PCL in the Chiefs third preseason game against the Seahawks. He’ll miss the remainder of the season. Kareem Hunt will take over as the Chiefs starting running back and is now in line for 20+ touches a game. Hunt should be selected in the second or third round of fantasy drafts given his expected workload/production this season.

Odell Beckham Jr., WR New York Giants – Beckham is dealing with an ankle sprain he got in the Giants second preseason game. ESPN reported that Beckham could miss the first game or two of the regular season. Giants coach Ben McAdoo said Beckham is improving and he’s hopeful his star receiver will be able to play Week 1. Beckham owners will just need to hold their breath and wait. If you haven’t drafted yet, Beckham is still going in Round 1, although his ADP has dropped a couple of spots down to pick six.

Eric Decker, WR Tennessee Titans – Decker missed the Titans third preseason game with an ankle injury. He suffered the injury last week, so the severity isn’t known. There’s a chance the Titans were just being cautious and sitting the veteran during a preseason game. With both Decker and rookie Corey Davis out, Rishard Matthews continues to be Marcus Mariota’s No. 1 receiver.

Julian Edelman, WR New England Patriots – Edelman tore his ACL in the Patriots third preseason game against the Lions. He’s out for the rest of the season. Chris Hogan replaced Edelman and scored twice. With Edelman injured, Hogan, Brandin Cooks and Danny Amendola get bumps in fantasy value. Cooks is now being drafted in Round 2, while Hogan has jumped up to the ninth/tenth round area.

Cooper Kupp, WR Los Angeles Rams – Kupp missed the Rams third preseason game with a groin injury. The injury isn’t serious but unfortunately it kept Kupp out of the Rams dress rehearsal for the regular season. Even so, the rookie has shown good chemistry with Jared Goff this preseason. He should have a big role in the Rams passing game.

Jordan Matthews, WR Buffalo Bills – Matthews missed the Bills third preseason game with a chest injury. He was never expected to play but Matthews is close to returning to the practice field. Even though Matthews has had virtually no practice time with his new team, he’ll be one of the Bills starting receivers in Week 1 if he’s healthy.

Cameron Meredith, WR Chicago Bears – Meredith tore his ACL in the Bears third preseason game. He’ll miss the remainder of the season. The Bears were already dangerously thin at receiver with Meredith. Now Kevin White and Kendall Wright step up as Chicago’s top two receivers. White has struggled in his brief career. Wright had his best pro season under current Bears offensive coordinator Dowell Loggains in Tennessee. He’s worth a late-round flier.

Demaryius Thomas, WR Denver Broncos – Thomas suffered a groin injury in the Broncos third preseason game. He missed practice on Monday. The injury isn’t believed to be serious but Thomas could miss more practice time as a precaution. He’s expected to play in Week 1 where he’ll be a low-end WR1 versus the Chargers.

Tyrell Williams, WR San Diego Chargers – Williams missed the Chargers third preseason game with a groin injury. He’s listed as day to day. Williams’ injury isn’t a serious one. He should return to practice soon. Williams is being drafted as a value WR3/4 in Round 9.

Eric Ebron, TE Detroit Lions – Ebron had missed close to a month with a hamstring injury but returned to practice on Monday. There’s no word if Ebron will be ready for the opener but he’s trending in the right direction. Ebron’s ADP is late Round 12.