Red zone production is a big factor in determining fantasy success. Every Wednesday throughout the season we’ll examine red zone statistics at each position and what it means going forward. Heading into Week 1, we look back at last season to see which players excelled in the red zone and which ones struggled.

Matt Ryan, Atlanta Falcons – Ryan ranked third in the NFL last season with 62 red zone completions. He threw 23 touchdowns and just one interception. His 17 touchdown passes inside the 10-yard line also ranked third in the league. The Falcons lose offensive coordinator Kyle Shanahan but they return the rest of the key components from a unit that scored 540 points. Even if Ryan takes a small step back, he’ll still be a Top 10 red zone quarterback in 2017.

Carson Wentz, Philadelphia Eagles – Wentz ranked sixth in the NFL with 86 red zone attempts last season, so the opportunities were there. However, he only completed 42 passes and threw 12 touchdown passes. The Eagles signed Alshon Jeffery and Torrey Smith this offseason to improve arguably the NFL’s worst receiving corps. Jeffery (6-3, 218 pounds), in particular, is a big threat in the red zone. He’ll try to help Wentz improve on his 47.2 percent red zone completion percentage. Wentz will need to be more productive in the red zone to move into the weekly QB1 conversation.

LeGarrette Blount, New England Patriots – The Eagles also gave Wentz help by signing the top red zone running back from a year ago. Blount led the NFL in red zone rushing attempts (68), yards (174) and touchdowns (16). He accounted for 69.4 percent of the Patriots red zone rushing attempts in 2016. Blount may have the single most fantasy impact of any player this season. First, his own numbers are likely to greatly decline outside of the Patriots offense. Second, the Eagles are hoping Blount can make them less dependent on the pass in the red zone. Lastly, it’s unknown how New England will split up Blount’s red zone touches between Mike Gillislee, Rex Burkhead, Dion Lewis and James White. Blount’s move to Philadelphia will have a big impact in the fantasy world.

Jordy Nelson, Green Bay Packers – Nelson was the Blount of receivers. He dominated in the red zone last year. Nelson led the NFL in red zone targets (29), receptions (19), yards (127) and touchdowns (11). He saw 27.6 percent of the Packers red zone targets. The Packers have a lot of weapons but inside the 20, Aaron Rodgers clearly looks for one guy over everyone else. Nelson’s red zone production makes him worth his Top 15 ADP.

Julio Jones, Atlanta Falcons – Nelson scored 304 points in PPR leagues last year. Jones scored 260. The difference was red zone production. Jones saw an unfathomable nine red zone targets and scored just twice. It’s even harder to believe considering, as we mentioned above, Ryan ranked third in the NFL with 62 red zone attempts. The Falcons said they worked this offseason on getting Jones the ball more in the red zone. It will be interesting to see if they do because Ryan improved in 2016 by spreading the ball around to different receivers. Ryan’s completion percentage jumped from 66 percent to 70 percent, while his TD-INT ratio went from 21-16 to 38-7.

Kyle Rudolph, Minnesota Vikings – Rudolph ranked second behind only Nelson in red zone targets last season with 24. However, because Rudolph plays with Sam Bradford and not Aaron Rodgers, he finished with only five touchdowns. At 6-6, 265 pounds, Rudolph has always been a physical presence in the red zone. The Vikings ranked 31st in red zone rushing attempts last season, so Rudolph’s opportunities are likely to decline in 2017 with the presence of Dalvin Cook and Latavius Murray. 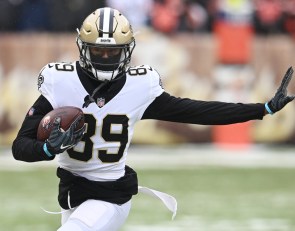 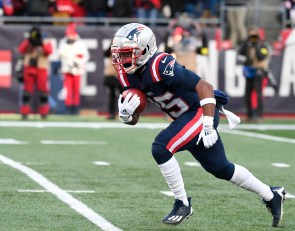