Andrew Luck – He’s done. He has to be. On Wednesday, the Colts admitted that he was sore from trying to throw with his surgically-repaired throwing shoulder. That puts him out indefinitely again. The Colts are 2-4 and there is no reason to expect a turnaround. Their only wins were against the Browns and 49ers – both winless. What is Luck coming back to if he ever does get cleared for this year? There’s growing speculation that the Colts have knowingly misled fans (and season ticket holders) that Luck would be returning. After seven weeks, you probably are used to the roster spot be used but it is looking like your optimism that was used as well.

Thursday Night – Usually, these games go off with lower scores from teams not being as prepared to play. This time it went the other way with the Raiders pulling out the 31-30 win against the Chiefs in an exciting game. The most notable being that Amari Cooper was thrown 19 targets and caught 11 for 210 yards and two touchdowns. That was a career high for yardage and his first game of any positive note since Week 8 of 2016. Cooper only totaled 118 yards over his first six games. Thursday nights are just hard to call and after three straight weeks of sub-ten yard games, he may have been on every fantasy bench.

Josh Doctson – HC Jay Gruden said that he intended to get Josh Doctson more playing time after the reserve player caught his second touchdown over the last three games. That ties him with  Ryan Grant and Chris Thompson for the receiving touchdown lead for the Skins even though he’s only been thrown nine passes this year to catch four with 90 yards gained. Gruden said Doctson would be the starting slot receiver back in May but that did not happen. He battled a hamstring strain the first few weeks. But Doctson was the 1.22 pick in 2016 that lost his rookie year to an Achilles injury. On a team that has been disappointed with Jamison Crowder and Terrelle Pryor, the need is great for someone to step up. Even Jordan Reed has not been a contributor. If he can stay healthy, he can be the No. 1 wideout there.

Laquon Treadwell – Like Doctson, here is a 2016  first-round pick that hasn’t panned out yet. He made a spectacular catch replacing Stefon Diggs last week.  It’s worth seeing if you haven’t.  The Ole Miss star only caught one pass as a rookie and it was less about him being injured than not earning the playing time.  Like Doctson, he was slated to have a bigger role this year but had injury issues during training camp. He still has not caught an NFL touchdown and only reeled in eight receptions so far. But he just flashed the form that made him a first-round pick. With Diggs and Michael Floyd healthy, his role may remain very small but he’s worth tracking.  His talent just hasn’t translated into the NFL quite yet.

Evan Engram – The devastating losses to the wide receivers of the Giants makes Engram into an instantly more interesting prospect. He already was playing better than most as a rookie tight end. In Denver last week, he was thrown seven targets and caught five for 82 yards and the lone receiving touchdown. No other player had more than three. He’s now top five for a rookie which shatters all expectations (though overall tight ends are not doing well this year). He was mostly, and rightfully, not given much fantasy attention last summer. But now that targets are needed for Eli Manning, the ex-Mississippi stud is already more like a wideout than a tight end at 6-3 and 236 pounds. Most notable measurable? He ran a 4.4/40 at the combine. His transition into being a receiving tight end just became a lot faster.

C.J. Beathard – This will be interesting since the 49ers surprised when they drafted him in the third round – two or three rounds earlier than he had been projected. The ex-Iowa quarterback started for his final two years but never passed for more than 2,809 yards in a season or 17 touchdowns. He was considered a developmental project in the NFL and some scouts did not think he was good enough to ever be more than a backup. But here we are, six games into the season and he is already deemed the starter the rest of the way. He ran a pro-style offense in college which helps. But he is there in Year One of the offense installation by HC Kyle Shanahan who did not see results in Atlanta until his second season. A lack of receiving talent around him also depresses Beathard’s first-year outlook even more.

And an extra point –  I am very intrigued by Brett Hundley.  The UCLA quarterback was considered raw when drafted in 2015 but he’s had two full seasons to learn the ways of the NFL. Behind one of the best to play the game.  It is plenty easy to discount what Hundley will do. But he is already well-steeped in the scheme and already knows all the players well. This is a very mature offense as well, stocked with viable passing targets. This situation is everything that Beathard’s new gig is not. And better yet – the Packers schedule is not bad – NO, bye, DET, @CHI, BAL and @PIT next. 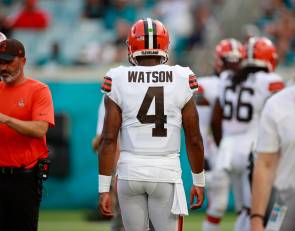