Extra Points: LeSean McCoy was held to 50 yards rushing but he caught four passes for 46 yards and scored twice…Charles Clay took advantage of a good matchup and delivered with five catches for 68 yards…One week after playing well, Jay Cutler bombed with 274 yards, no touchdowns and three interceptions…Jarvis Landry once again led the Dolphins in receiving. He caught 10 of 13 targets for 99 yards…Kenyan Drake stayed hot during fantasy semifinals. Drake caught six balls, gained 113 total yards and scored.

The Ravens defense suffocated the Browns for the second time this season. Baltimore finished with two sacks, two interceptions, two fumble recoveries and scored a touchdown on Sunday.

Extra Points: Joe Flacco rewarded owners who streamed him in Week 15. Flacco threw for 288 yards and accounted for two touchdowns. He’s thrown for at least 269 yards and put up two touchdowns in each of his last three games…Alex Collins picked a bad time to have his worst game in a month. Collins was held to just 19 yards rushing on 12 carries. He did catch five passes for 33 yards to at least boost his scoring in PPR leagues…Josh Gordon led the Browns in receiving but it wasn’t the stat line owners were hoping for out of him. Gordon caught five passes for 47 yards on 11 targets.

It’s been difficult to predict which Vikings running back to start week to week. For those owners who started Jerick McKinnon on Sunday, it paid off big-time. McKinnon caught seven passes for 114 yards. He added 24 yards rushing.

Extra Points: Latavius Murray also had a strong performance against the Bengals with 76 yards and a score on 20 carries…Adam Thielen had his least productive game of the year at the absolute worst time for fantasy owners. Thielen was held to three receptions for 30 yards. It was a season-low in both receptions and yards for Thielen…Speaking of bad games, A.J. Green was held in check by Vikings cornerback Xavier Rhodes. Green caught just two passes for 30 yards…Giovani Bernard was held to only 43 total yards but he did score a touchdown to salvage his day…The Vikings defense dominated a lifeless Bengals offense with three sacks, two interceptions and a touchdown.

Alvin Kamara got knocked out with a concussion last week. However, the Saints two-headed monster at running back was back to normal on Sunday. Kamara caught six passes, gained 89 total yards and scored a touchdown. Mark Ingram caught five balls, totaled 151 yards and scored twice.

Extra Points: Michael Thomas had one of his better games of the season against the Jets. He caught nine balls for 93 yards and a touchdown. Thomas has scored in three-straight games…The Jets passing game was grounded with Bryce Petty at quarterback. Petty threw for only 179 yards, one touchdown and two interceptions…Robby Anderson’s production predictably declined without Josh McCown. Anderson finished with five catches for only 40 yards.

Nick Foles did his best Carson Wentz impression on Sunday. Foles completed 24 of 38 passes for 237 yards and four touchdowns. He’ll be a streaming option again next week in a favorable matchup against the Raiders.

Extra Points: The Eagles top three receiving options didn’t suffer a fantasy decline in Wentz’s first game out. Nelson Agholor (7/59/1), Zach Ertz (6/56/1) and Alshon Jeffery (4/49/1) all caught a touchdown pass from Foles…Eli Manning had by far his best game of the season. Manning came out of nowhere to throw for 434 yards, three touchdowns and an interception…Like Manning, Sterling Shepard put up his best fantasy performance of 2017. Shepard caught 11 of 16 targets for 139 yards and a touchdown.

It was an ugly offensive game between the Redskins and Cardinals on Sunday. Kirk Cousins was the top performer with 196 yards and two touchdowns.

Extra Points: Samaje Perine didn’t put up the numbers owners were hoping for in Week 15. He was held to just 66 total yards…Jamison Crowder caught 5 of 7 targets for 55 yards and a touchdown…Larry Fitzgerald had an average game for fantasy semifinals. Fitzgerald caught 5 of 10 targets for 60 yards…The star of the Cardinals offense was kicker Phil Dawson. Dawson connected on 5 of 5 field goal attempts.

The story coming into the game was the return of Aaron Rodgers. Cam Newton stole the show though with 242 yards and four touchdowns. He also rushed for 58 yards. Rodgers day was up and down. He threw for 290 yards and three scores but Rodgers was also picked off three times. He was the Packers second-leading rusher with 43 yards.

Extra Points: Davante Adams (5/57/1) got knocked out of the game with a concussion. Randall Cobb finished as the Packers top receiver catching seven balls for 84 yards and a touchdown…Jordy Nelson surprisingly still struggled even with Rodgers back. Nelson caught only three passes for 28 yards…Jamaal Williams put up a clunker against the tough Panthers rush defense. Williams rushed for just 30 yards on 10 carries…Greg Olsen put up a goose egg last week. This week Olsen went for 116 yards and a touchdown on nine receptions…Christian McCaffrey caught six balls, gained 136 yards and scored…Even with Newton having a big game, Devin Funchess was held to a disappointing one catch for 19 yards.

Blake Bortles remained red-hot versus the struggling Texans pass defense. Bortles threw for 326 yards and three touchdowns. In his last three games, Bortles has thrown for at least 268 yards and seven touchdowns.

Extra Points: Marquise Lee left the game early with an ankle injury. Keelan Cole and Jaydon Mickens both responded with career games. Cole caught seven passes for 186 yards and a touchdown, while Mickens hauled in four passes for 61 yards and two touchdowns. Cole has now scored in three straight games…Chris Ivory didn’t do much with Leonard Fournette injured. Ivory gained just 42 yards on 17 carries…DeAndre Hopkins was the only Texans offensive player that produced strong fantasy numbers. Hopkins caught four balls for 80 yards and a touchdown…As expected, the Jaguars defense feasted on Houston’s offense. The Jags finished with four sacks and an interception.

The Rams throttled the Seahawks behind Todd Gurley. Gurley rushed for 152 yards and three touchdowns on 21 carries. He added six catches for 45 yards and a score to almost single-handedly get some owners into their fantasy finals.

Extra Points: With Gurley running over the Seahawks defense, Jared Goff didn’t have to do much. Goff threw for 120 yards, two touchdowns and an interception…Robert Woods returned after missing the last three games. Woods picked up where he left off with six receptions for 45 yards and a touchdown…The Seahawks couldn’t go anything on offense. Russell Wilson was held to 142 yards and a touchdown. He was sacked seven times…Doug Baldwin also had a nightmare game. Baldwin caught just one pass for six yards.

Tom Brady led the Patriots to a come from behind win over the Steelers. Brady finished with 298 yards, one touchdown and an interception.

Extra Points: Antonio Brown left the game in the second quarter with a calf injury. Brown’s early departure was a big blow to both the Steelers offense and his fantasy owners. He ended up with jus two receptions for 24 yards…Ben Roethlisberger got off to a hot start but the loss of Brown slowed down the Steelers passing game. Roethlisberger did throw for 281 yards, two touchdowns and one costly late interception…Le’Veon Bell racked up 117 yards and a touchdown on 24 carries. He also caught five passes for 48 yards…Rob Gronkowski has killed the Steelers in the past and Sunday was no different. Gronk caught nine balls for 168 yards and a two-point conversion.

The 49ers won their third game in a row and Jimmy Garoppolo is now 3-0 as a starter. Garoppolo threw for 381 yards and a touchdown. He’s thrown for at least 293 yards in each of his three starts.

Extra Points: Marquise Goodwin remained red hot. Goodwin caught 10 of 13 targets for 114 yards. He now has 28 receptions and at least 78 yards in his last four games…Garrett Celek found the end zone again. Celek caught three passes for 63 and a score. Celek has over 60 yards receiving and a touchdown in two straight games…Carlos Hyde was the one 49ers fantasy player that didn’t produce. Hyde was held to 25 yards on 16 carries…Robbie Gould was a big boast to owners in the fantasy semifinals. Gould connected on all six of his field goal attempts Sunday…Rishard Matthews had his second-best fantasy game of the year with six receptions for 95 yards and a touchdown.

It wasn’t pretty on offense for the Cowboys but they did just enough to win and keep their playoff hopes alive. Dak Prescott threw for 212 yards no touchdowns and two interceptions in his last game before Ezekiel Elliot returns next week. He also rushed for 32 yards and a score.

Extra Points: Dez Bryant had a rough game, despite a good matchup on paper. Bryant caught just two balls for 59 yards…Derek Carr threw for 171 yards and two touchdowns. He just missed a rushing touchdown by inches that ended up being a fumble in the final seconds…Michael Crabtree only put up 39 yards but caught seven passes and two touchdowns. 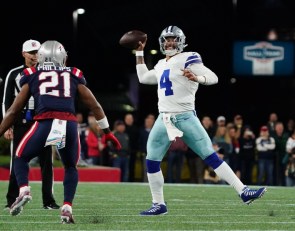 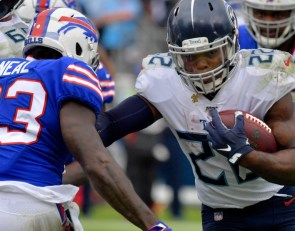 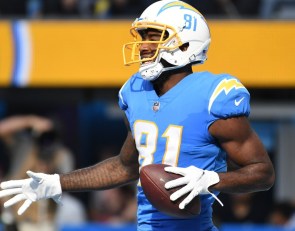 A 5-pack of prop bet payoffs for Week 6.

A snapshot look at the NFL betting lines and odds for Week 6 sports betting and DFS action.

Latest status of fantasy football weapons who are on the mend entering Week 6.