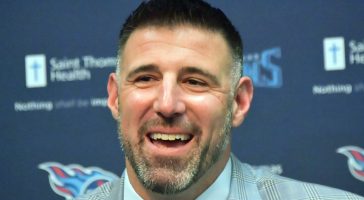 It probably came as a surprise to many casual observers when the Tennessee Titans knocked off the Jacksonville Jaguars in Week 17 and then rallied from 18 down in Arrowhead Stadium to beat the Kansas City Chiefs in the opening round of the playoffs to earn a trip to face the New England Patriots.

Also unexpected may have been, despite talks of a possible contract extension, team brass decided to move in a different direction from the 21-22 Mike Mularkey after a 9-7 season that ended with the team’s first playoff win in 14 years.

The coaching search didn’t take long, leading general manager Jon Robinson to hire a three-time Super Bowl champion as a linebacker in Mike Vrabel as the new head honcho in Nashville. The 42-year-old began his coaching career at his alma mater Ohio State as a linebackers coach before moving to the defensive line when new head coach Urban Meyer took over in 2012. In 2014, Vrabel joined the Houston Texans as the linebackers coach under Bill Belichick disciple Bill O’Brien.

Expect a head coach who blends a no-nonsense approach with a player-friendly familiarity that should garner respect and yet be relatable. Vrabel figures to be unafraid of taking big chances after coming from the Belichick coaching/player tree, especially since he was the recipient of 10 touchdown receptions on trick plays while with the Pats.

The 38-year-old LaFleur was a collegiate wide receiver and quarterback but never made it into the NFL. He spent from 2003-07 as an offensive assistant at several small colleges and transferred to the NFL in 2008 to become an offensive quality control coach for the Texans.

He made his way to the Washington Redskins for the 2010-13 seasons as quarterbacks coach prior to holding the same position for one year at Notre Dame. He returned to the NFL in 2015 to spend a pair of seasons in Atlanta, once again coaching quarterbacks, and then the Los Angeles Rams hired him in 2017 to coordinate the offense.

It is not particularly common to see a defensive-minded, first-year head coach with a single season of experience as a playcaller to hire an offensive coordinator towing as much experience in his own right. Generally, young coaches lean on seasoned coaches. There is no science saying one way is the right path, and we saw a pair of fresh offensive minds in LaFleur and Rams head coach Sean McVay create the most prolific offense in 2017.

Even though LaFleur didn’t call the plays last year, his influence and history of working with several great offensive minds cannot go unnoticed. Los Angeles became the first team in modern-era football to go from last to first in offensive points per game, scoring 14.0 a contest in 2016 to 29.9 under LaFleur. His background working with quarterbacks was evident in the practically overnight turnaround of Jared Goff, and running back Todd Gurley was unstoppable on his way to a league-best 2,093 scrimmage yards.

LaFleur has history working with different types of quarterbacks, ranging from the marvelous rookie season of Robert Griffin III to a conventional pocket-passer in Matt Ryan during an MVP campaign.

Make no mistake, “dink” and “dunk” are dirty, four-letter words to the hyper-aggressive LaFleur. Look for an offense that focuses on chunk plays: This won’t be your father’s Jeff Fisher offense in Tennessee.

Quarterback Marcus Mariota is more than capable of enjoying a career year under LaFleur. Tennessee has a gifted offensive line, a conceivable stud running back in Derrick Henry, and a top-10 wide receiver talent in Corey Davis waiting to be unleashed. Mariota’s mobility provides LaFleur ample ways to create big plays through a hybrid system of pocket passing and run-pass options. Expect a considerable turnaround and perhaps even the breakout season for Mariota many prognosticators forecasted in 2017.

On the ground, the aforementioned Henry has a real shot at dominating in fantasy. He has displayed big-play ability and could follow in the footsteps of Gurley, at least when it comes to ground gains. Henry’s receiving skills remain a work-in-progress, which could cost him time on third downs. Veteran DeMarco Murray is expected to be released to save $6.5 million in cap space.

Downfield assets in Mariota’s BFF Rishard Matthews, plus second-year receivers Taywan Taylor and Davis, currently round out the top wideouts. Tight end Delanie Walker is among the league’s best vertical weapons at his position, even if he turns 34 in 2018. Toss in expected gains by second-year tight end Jonnu Smith for a five-pack of effective targets for Mariota. While the tight end position wasn’t a factor for the Rams in 2017, LaFleur’s group hadn’t near the talent as this offense boasts.