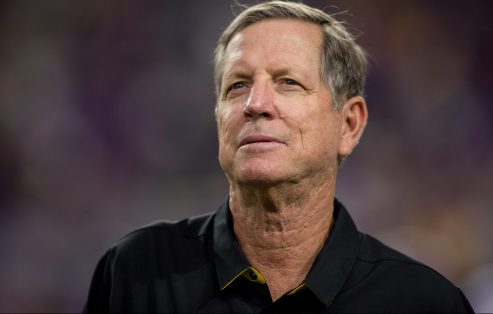 Obviously the Carolina Panthers chose to keep the situation status quo, but the defensive-minded Ron Rivera opted to go in a new direction for the offensive play-calling chores after firing Mike Shula following the 2017 season.

Shula was hired in 2011 as quarterbacks coach when Rivera came in as the new head coach. After two seasons in that position, Shula moved into the role of offensive coordinator for five years. In 2017, the Panthers finished 19th in total offense (323.7 yards), 12th in points (22.7), fourth in rushing (131.4 yards) and just 28th in passing (192.3 yards) per game. Carolina’s veteran coach turned to another established NFL mind to run his offense for 2018.

A professional coach dating back to 1991, Turner is a respected offensive mind who has orchestrated several dominant seasons. He has tutored a variety of quarterbacks, and Turner has been a head coach for three NFL franchises over 15 seasons.

While Turner’s offenses have historically produced powerhouses, he has not fared so well in recent stops. A disagreement in philosophy with Minnesota Vikings head coach Mike Zimmer led to a surprise resignation by Turner after five games and an undefeated start in 2016. Despite a hot start in the win-loss column, Minnesota’s offense really wasn’t the reason for success. Turner did not coach in 2017.

Over his prior two seasons as Zimmer’s offensive play-caller, Turner produced offenses ranked no better than 27th in offensive yards and 28th in passing yards. Minnesota ranked fourth in rushing offense in 2015 and 31st in aerial gains that year. Turner was a one-and-done coordinator in 2013 for the Cleveland Browns, finishing the year ranked 27th in points per game.

Turner will inherit a much better quarterback situation in Carolina than he had in the Twin Cities. Look for more pocket passing and a vertical aerial attack based on play-action passing. Turner has shown the ability to adapt to his situation, whether it be implementing zone-read plays in Minnesota with Teddy Bridgewater under center or evolving a San Diego offense from being LaDainian Tomlinson-dependent to Philip Rivers-led.

Six times Turner has enjoyed the NFL’s leading rusher on one of his teams, including all-time talents in Emmitt Smith, LT, Ricky Williams and Adrian Peterson.

Turner’s best offenses pushed the ball down the field while keeping a balanced approach in play selection. He should be able to implement his preferred style of attack with quality offensive line play, as long as Cam Newton is able to handle all that Turner puts on a quarterback in his system.

Turner’s successes and failures will be directly tied to Newton. Cam is coming off of shoulder surgery, so monitor how he progresses during the offseason. Turner’s offenses thrive with precise quarterback play. Assuming all goes as planned with the recovery, Turner can tighten up some of Newton’s mechanics and perhaps instill a greater sense of urgency in his game. Newton has high-end QB1 upside and nearly as much risk to be a bust.

Depending on what happens with Jonathan Stewart this offseason, Turner could be gifted a pair of talented backs whose styles nicely contrast. J-Stew, 30, has not averaged north of 3.8 yards per carry in the past two seasons, though he has found the end zone 16 total times in that span. On a limited basis, with a two-down role, he has something left in the tank. A $5.2 million salary cap hit could send the Panthers looking for a cheaper option, however.

Third-down weapon Christian McCaffrey was unimpressive as a runner in 2017, though a force-feeding through the air made him relevant as a rookie. The former Stanford star managed 80 receptions out of the backfield and scored on five of them, finishing with a respectable 651 yards aerial yards.

Turner has not been shy about throwing to running backs, if we’re putting it mildly. Darren Sproles was a staple in the San Diego passing game. Unheralded pass-catchers even found a role, with the likes of Ronnie Brown, Chris Ogbonnaya, Mike Tolbert, Ryan Mathews and Matt Asiata all catching 40-plus passes in single seasons. Tomlinson and Frank Gore all enjoyed fine aerial efforts, as well. McCaffrey’s fantasy worth stands to benefit the most from this hiring.

Downfield passing, as mentioned, is the hallmark of a functioning Turner offense. Vincent Jackson, Michael Floyd, Alvin Harper, Josh Gordon, among many others, made a living streaking down the field in this system. Don’t anticipate seeing many receivers catch 90 passes for 900 yards in a Turner offense. Low-volume, high-yardage outputs are the norm.

The cupboard is hanging off of the wall in Charlotte, N.C. Carolina desperately needs to address the position even further this offseason, despite having some promise in the likes of Devin Funchess and Curtis Samuel on the roster.

Greg Olsen should thoroughly enjoy working in Turner’s system. The do-all tight end is exactly the type of player Turner loves to unleash all over the field. From the days of guys like Fred Davis and Jay Novacek to Antonio Gates and Jordan Cameron, Turner features the position like few other schemers.