McDermott was hired last year after last serving as the Carolina Panthers defensive coordinator from 2011 through 2016. His entire resume’ was on the defensive side and as a first-year coach, he relied on Rick Dennison who had managed offenses in Denver and Houston. Dennison was released in January after the Bills offense dropped to 29th overall. 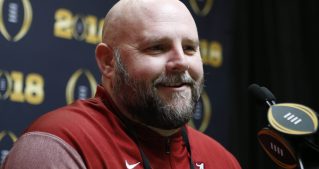 He was with head coach Eric Mangini with the Browns before the entire coaching staff was released after two 5-11 seasons. He was with head coach Tony Sparano in Miami during his final season and was part of the coaching purge again.  His most recent offense was in Kansas City during Romeo Crennel’s only full year and was part of that purge as well. His four previous years as an offensive coordinator totaled an 18-46 record over three teams. He’s specialized in joining a team for the final year before a head coach is fired.

To his credit, he was the Patriots tight ends coach in 2016 when they won the Super Bowl and joined Alabama just in time to win a National Championship all within one year.  The bulk of Daboll’s time in the NFL was with the Patriots over two stints totaling 11 years. There was early speculation that Daboll would return to the Patriots to become an offensive coordinator but the Bills grabbed him on January 14 while the playoffs were still on. And Josh Daniels was convinced to remain despite having informally accepted the head coaching offer from the Colts.

Fortunately, the bar is low for Daboll who has a history of being in mostly bad situations when he takes over an offense aside from the Crimson Tide in 2017. The Bills were using a West Coast variant with Rick Dennison last year. It was too complex, didn’t have the personnel at wide receiver and Tyrod Taylor is far better suited to a vertical game that allows him more room to run.

Daboll is mostly steeped in the Patriots-style offense which usually features two or three receivers on each side of the formation and simpler play calling that allows for a quicker tempo and the no-huddle formation. It’s very well suited to Tom Brady who can read defenses and pick them apart. Tyrod Taylor is no lock to make the Bills team this year and the expectation is that the Bills will be grabbing a first-round rookie quarterback to build the team around. That could bode very well for the future though less so for 2018 with a new offense being installed with a rookie quarterback.

He has been adept at tailoring his scheme to the personnel that is available.  That means LeSean McCoy will continue to be heavily featured as the only lock for high production.  What he does with the eventual starter at quarterback will be interesting and harder to gauge. Daboll’s history with the position has been spotty. In Cleveland, he had five different mediocre quarterbacks over his two years. In Miami, it was Chad Henne and Matt Moore. With the Chiefs, Matt Cassell and Brady Quinn.

Daboll has not taken a raw NFL quarterback and molded him into anything special yet. He had success with the Crimson Tide last year but their program attracts the best and brightest players. Jordan Matthews is a free agent likely to sign elsewhere but Kelvin Benjamin offers at least a possession receiver. Zay Jones struggled badly as a rookie and the second-rounder from 2017 has to learn another offense this year. It was later disclosed that Jones played with a torn labrum for most of the year so he cannot be written off yet.

So far, Daboll has either been with an elite team or on a sinking ship with nothing in between. His success will ride heavily on the quarterback that the Bills end up starting.  The only tight ends that have prospered under him was Rob Gronkowski who was already in his fifth season when Daboll coached the tight ends.

Daboll was one of the hotter candidates for offensive coordinator this year and he has a lengthy resume with offenses. This offense has nowhere to go but up yet the climb may be slower for this season. The personnel on hand is more similar to his gigs running mediocre offenses in Miami, Cleveland and Kansas City than what he inherited in New England or at Alabama. Worth tracking but with tempered expectations.