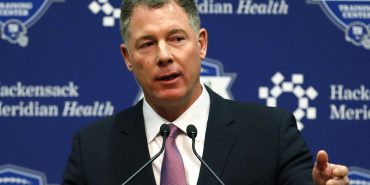 The Giants finally depart from the Tom Coughlin imprint and build a new team with all new schemes for the first time since  2004. They fired Ben McAdoo during his second year when they fell to an eventual 3-13 season. He was the offensive coordinator in  2014-2015 before being promoted up when Coughlin left. This is an exciting time for the Giants – a chance to truly remake the team.

Shurmur has coached in the NFL since 1999.  He was the offensive coordinator for the Rams (2009-2010) and head coach of the Browns (2011-2012). He was the offensive coordinator for the Eagles (2013-2015) and then took over the Vikings offense when Norv Turner left early in the 2016 season. He helped the Vikings reach a 13-3 mark last year despite losing his starting quarterback and prized rookie running back early in the season.

Shurmur will call the plays. This will be his offense in addition to head coaching duties. Shurmur has a solid history of offenses and quarterbacks. With the Rams, he coached Sam Bradford’s first year that resulted in an Offensive Rookie of the Year. With the Eagles, he used Nick Foles and Bradford again. With the Vikings, he used Bradford and Case Keenum. He’s helped all his quarterbacks perform at their highest level.

Shurmur was also the quarterback’s coach for the Eagles (2002-2008) and developed Donovan McNabb into an elite player for the first six years of his career. He was brought up in the Andy Reid system until 2008.

Shula wasn’t the first choice.  The Giants wanted to consider the Vikings quarterbacks coach Kevin Stefanski but was denied the request. Shula’s play calling came into question the past season as their offense tumbled to only 28th in passing yards and 27th in rushing yards.

What makes the addition even more suspect is that Shula spent the last five years with Cam Newton who never matched the passing yardage of his first two seasons when Shula was not there. And Newton is one of the premier rushing quarterbacks while the Giants feature Eli Manning as one of the least mobile players in the NFL.  Newton ran for 754 yards last season while Manning totals 540 yards over his 14 years in the NFL. He only gained 17 yards from the last two years combined.

Shula will deal with game planning and can step up if needed but he’s tasked mostly with working with Manning and the passing game.

This should be very different.

The renewed focus on the rushing game will be noticeable. Even with Dalvin Cook on IR by Week 5, the Vikings ended Top 5 for carries, rushing yards and touchdowns from their backfield last year. The Giants have long suffered from mediocre committees that ranked below average even when combined. LeSean McCoy enjoyed his career-best season under Shurmur in 2013.

The backfield is a lock for change this year. The ineffective collection of Orleans Darkwa, Wayne Gallman, Paul Perkins and Shane Vereen doesn’t fit what Shurmur prefers. He’ll shoot for a very balanced attack despite the presence of playmakers as receivers. The Giants offensive line needs work as well and could limit what happens for 2018 but Shurmur has no problem relying on a single back if he is productive or settling on just a rusher and a third-down receiver as he did the last two years in Minnesota.

Manning is not going to change much other than he will throw less. The Giants led the NFL with 607 passes in 2017 (and yet only 19th in passing yardage) during the offensive implosion. An effective rushing game will help the passing effort. The presence of a better rushing attack will help Odell Beckham and Sterling Shepard.

Evan Engram pulled off the rare productive season as a rookie tight end. His future remains just as bright with Shula taking a seventh-year, 800-yard-per-year Greg Olsen and letting him string three straight 1,000-yard seasons. Kyle Rudolph enjoyed his best two years with Shurmur calling plays in Minnesota. He also developed Zach Ertz for his first three seasons. The tight end will remain a big part of the passing equation.

Beckham and Shepard will see no fewer catches though outside of them and Engram, the pickings will be slim for all other receivers. Eli Manning won’t likely have a huge season under this coaching regime, but he should maintain if not improve recent years. The team is in total overhaul and that can return lower production at least earlier in the year. But under-using a backfield stocked with mediocrity will not continue. Acquiring a top veteran or drafting an early running back should be more respected in fantasy terms with this staff.