He initially employed Clyde Christensen as his offensive coordinator who was the quarterbacks coach with the Colts. But the offense has always been the domain of Gase and that won’t change here. He brought his success with the Peyton Manning years in Denver while Christensen helped install the scheme. Christensen has been made Director of Football/Player Development this year. 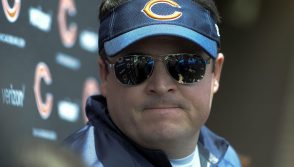 Loggains made his mark working with quarterbacks for the last ten years and also was an offensive coordinator for the Tennessee Titans (2012-2013) and then the Chicago Bears (2016-2017). Loggains was released as a part of the overall coaching purge in January. Saddled with a lack of talent and significant injury problems, the Bears went 3-13 and 5-11 in the last two seasons.

While in Tennessee, he directed Matt Hasselbeck, Ryan Fitzpatrick and Jake Locker at quarterback while Chris Johnson turned in two of his 1,000-yard seasons. He had to contend with injuries to his quarterbacks in both years. At the Bears, his first season was a disaster while he was forced to start Matt Barkley, Jay Cutler,  and Brian Hoyer in yet another year where all suffered injuries.

Last year had the split between Mike Glennon and rookie Mitchell Trubisky when the wide receiver corps was decimated by injuries.  Overall, Loggains has never had much luck with offenses if only because of rampant injuries, bad situations and a lack of talent.

The move reunites the coaches. Loggains was the quarterback coach in Chicago in 2015 while Gase was the offensive coordinator.

Loggains comes in but the offense will remain under the influence of Adam Gase. Their one season together in Chicago was when Jay Cutler only missed one game and threw for 21 touchdowns. This was before Jordan Howard when the Bears backfield combined an aging Matt Forte and Jeremy Langford.

Gase brought in hope that Ryan Tannehill would take the next step as a quarterback but he suffered a down year in 2016 with only 19 touchdowns and missed three games with injury. Tannehill then missed the entire 2017 season when he required reconstructive knee surgery and Jay Cutler was dredged up from retirement to rejoin Gase.

This offense won’t change much if at all in scheme with the addition of Loggains.  Tannehill returns from injury and won’t need to learn anything new. Tannehill is only 30 years old but there is speculation that the Dolphins might grab an early quarterback – perhaps a first rounder – and their history with Tannehill suggest it would be prudent. But that would set back the offense again if a rookie started at any point. Tannehill is signed through 2020 and receives $17M this year so taking a new quarterback is less likely.

More likely will be the addition of an upgraded veteran running back or a highly-drafted rookie. Jay Ajayi did little as a rookie during Gase’s first season but had a breakout 2016. He was traded to the Eagles for just a fourth-round pick in October and Kenyan Drake offered mixed results as the new starter.

Gase’s offenses in Denver made great use of screenplays but in Miami opted to use Jarvis Landry for the short-yard, possession catches. Under Gase, Landry totaled 206 catches over two seasons and that won’t change with Loggains added unless Landry leaves in a trade. The Fins placed the franchise tag on Landry who is a free agent.

There is no reason to expect any change to the tight ends remaining to be primarily blockers. This change in offensive coordinators isn’t all that significant. Having the team finally staying healthy would be the biggest plus. There is a chance that there are no significant personnel changes but Landry is not a lock to stay and what the Fins do in the draft will speak volumes about what direction they are taking for 2018.