This will be a QB-heavy draft with four quarterbacks expected to go in the first round if not the first ten picks. Measurables are important but not nearly as much as their on-the-field play and leadership. The position is drawing more interest for 2018 than in many years.

There wasn’t anything dramatic from the combine and most scouts saw whatever they were looking for.

Josh Allen (Wyoming) – Displayed great skills and did nothing to hurt his stock as one of the top quarterbacks coming out this year. Ran a 4.75/40 and drew good reviews for his footwork and elite arm strength. Many scouts found him to be the best passer of the day as he displayed pinpoint accuracy on routes of all depths, including the deep ball. It also did not hurt when he measured out to be the biggest guy in his class at 6-5, 237 pounds with 10 1/8″ hands – all top marks. For now, he’s a lock to be a Top 3 pick and in play to be the No.1 overall.

Baker Mayfield (Oklahoma) – While still the shortest among those considered NFL-starter worthy, the 6-0 Mayfield also came in among the lightest (215) and with the smallest hand (9 1/4″). But Mayfield displayed his traditional bravado and interviewed well. He even said he’d gladly go to the Browns where “First things first, they’d get a winner. If anyone is going to turn that franchise around, it’s going to be me.” He had a solid 4.84/40 and was accurate when passing. He helped himself among those dismissing him as just another “Johnny Manziel”.

Josh Rosen (UCLA) – While he was a bit less accurate on the passing drills, there’s plenty of tape out there that shows what he is capable of doing. Rosen’s main goal was to keep from having his draft stock drop since he may be a Top 10 pick. At 6-4, 226 pounds, he’s the prototypical pocket passer. His pro day should erase any concerns about his passing accuracy and he did nothing to keep from hearing his name on Day 1.

Sam Darnold (USC) – Expected to be one of the first names called on Day 1, Darnold displayed no advantages in measurables with slightly below average hand (9 3/8) and lower marks in the vertical jump and broad jump. He was the only quarterback that opted to skip the passing drills that could have allowed him a 1:1 comparison with the rest of the class. He’ll likely make up any lost ground in his pro day but had he thrown well, he could have cemented his draft spot. Mostly he just missed an opportunity.

Lamar Jackson (Louisville) – Tremendous athlete and former Heisman Trophy winner wants to be considered as a quarterback. Some teams have suggested he’d be better off as a wide receiver and his stats from college had him as a good passer but a great dual threat with 1,601 yards and 18 touchdowns as a rusher last year. Jackson opted to skip the physical drills (40-yard dash, vertical and broad jump)  to be solely viewed as a passer. Unfortunately, he did not prove as accurate as he would have liked and issues with inconsistent footwork were on display. 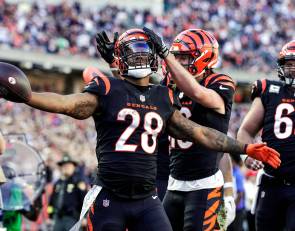