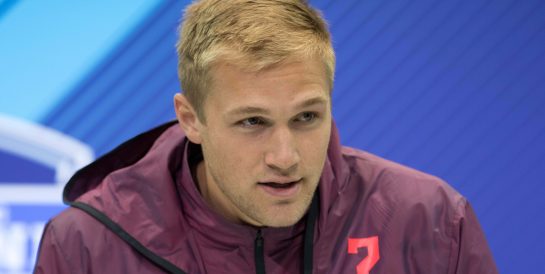 2017 was a big year for tight ends with 17 drafted and a highly unusual three players made the first round – O.J. Howard (1.19), Evan Engram (1.23) and David Njoku (1.29). This year is much less promising with likely only three expected to be selected over the first two rounds. Engram became one of the exceedingly rare rookie tight ends that offered fantasy value.

Mike Gesicki (Penn State) – The 6-6, 247-pound former basketball player led the Nittany Lions in receptions (57) in an offense that mostly just gave the ball to Saquon Barkley. He was by far the best surprise of the combine for the position when he ran a 4.54/40 to rank No.1 among tight ends and Top 10 compared to wideouts. His 129″ broad jump was the high mark as well and he lifted 22 reps for the bench press. He was the talk of all attending the combine. He had been projected as a third or fourth-round pick as around the fourth-best tight end but that will improve now. His end-zone high point ability could come into play even as a rookie.

Hayden Hurst (South Carolina) – Coming into the combine, he was the consensus top tight end and the only one with a shot at a first-round grade. He ran a 4.67/40 which was above average for the position and then shined in all drills. He had the hands of a wideout and did nothing to drop his draft stock. He remains the likely first tight end drafted.

Troy Fumagalli (Wisconsin) – He turned in two seasons with more than 45 catches but only scored seven times in his four years. The Badgers have produced other NFL-quality tight ends so Fumagalli attracted attention. But the 6-5 rookie only weighed in at 247 pounds and that’s a problem if he is to block defensive linemen or linebackers. He’s much less likely to become an every-down tight end if he cannot measure up as a blocker.