Chiefs recharge with Mahomes and Watkins

Chiefs recharge with Mahomes and Watkins 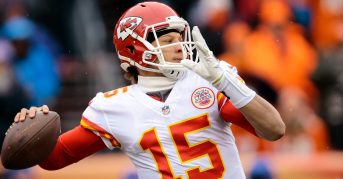 The Chiefs blew it the playoffs, again, and look to refresh the offense that hasn’t been good enough to play much in January. Head coach Andy Reid’s five seasons in Kansas City saw the Chiefs reach the playoffs four times. They’ve won just once when they shut out the Texans in the Wild Card round in 2015. And that game was handled mostly by the defense since Alex Smith only threw for 190 yards and one score while the best rusher was Spencer Ware with only 67 yards.

Reid brought in Smith to run the offense for all five seasons in Kansas City. He also inherited Jamaal Charles for his last two productive seasons and then tinkered with Charcandrick West and Spencer West for two years. In 2017, the Chiefs struck gold with Kareem Hunt. After once featuring the most unproductive set of wideouts in the NFL, the Chiefs also got lucky when their 5.28 pick in 2016 of Tyreek Hill vastly exceeded expectations.

Through it all, Smith was the only constant. Until last season, the Chiefs under Reid remained in the bottom-ten in passing stats including their historic 2014 season when they failed to throw a touchdown to any wide receiver. And now… Smith is gone.

The Chiefs used their 1.10 pick in 2017 to select Patrick Mahomes out of Texas Tech – second only to Mitchell Trubisky and two picks before Deshaun Watson. Mahomes threw for 9,705 yards and 77 touchdowns over his final two years in college. He ran for 744 yards and 22 more scores in that time. Mahomes is not the “game manager” or dink-n-dunk specialist that Smith was often accused of being. Mahomes was a gunslinger in college with a cannon arm capable of making those deep throws that were so often missing when Smith played.

Mahomes only played in one game last year – he started Week 17 when he passed for 284 yards in Denver in a game that both Travis Kelce and Tyreek Hill sat out.  Those two receivers dominated the receiving production with 1,000-yard seasons for the Chiefs last year when no other receiver produced more than the 554 yards by Albert Wilson which included 147 yards with Mahomes in the final game. Mahomes inherits arguably the best tight end and a dangerous, speed-freak wideout.

And Albert Wilson is gone. But Sammy Watkins just signed a 3-year, $48 million contract with the Chiefs.

Watkins was a 4.4/40 speedster out of Clemson that spent his first three seasons in Buffalo. He played with EJ Manuel and Tyrod Taylor with encouraging results though he battled injuries in his final two seasons there. For 2017, he was there for the offensive turn-around by the Rams though his 39 catches ranked just fourth-best on the team. But that offense still did not feature any single receiver much and Cooper Kupp’s 869 yards was a team high.

There is no denying that Watkins has speed and talent even if it has not consistently shown up. And unlike in Buffalo, Watkins is not expected to step into being the No. 1 receiver with Kelce and Hill already there. But for Mahomes who already sparked optimism, the addition of Watkins could help to make this entire offense a source of fantasy sleepers.

Mahomes already has a year under his belt even if he only played one game. The offense is less likely to resemble the slow-play of  Smith-led attack and has a chance to harken back to the days of when Donovan McNabb ran Reid’s offense. Mahomes has the arm and the legs for a dual threat. A top tight end, potentially two 1,000-yard receivers and, oh yes, a second-year running back that recorded 1,782 total yards and 11 touchdowns as a rookie. That included 53 catches for 455 yards.

The Chiefs offense surprised last year with their best production under Andy Reid. Handing Mahomes the starting job is unlikely to immediately produce the same or better stats than what the veteran Smith accomplished.  But it is certainly not impossible either. Mahomes and Watkins both make intriguing sleeper-types that can be had deeper in fantasy drafts.