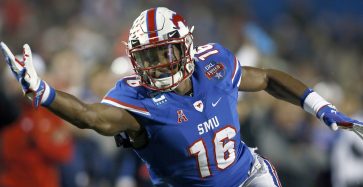 Courtland Sutton was a three-year starter for the Mustangs and topped 1,000 yards in his last two seasons. He was a highly-coveted safety coming out of high school that was converted by the Mustangs to make better use of his big frame.  He also played basketball for a bit but excelled at football for the last two years. Sutton was a first-team All-AAC pick in 2016 when he caught 76 passes for 1,246 yards and scored ten times. His stats suffered last year when Trey Quinn joined the team and became the primary wideout.

Sutton was limited by his quarterbacks but still managed to post top stats for the last two seasons in the conference. He elected to return in 2017 for his fourth year and is a mature, confident wideout.

Sutton comes into the NFL as a prototypical possession receiver but is less likely to become a dominant No. 1 wideout. His maturity and experience should help get him onto the field and his size can be used in the red zone – that is where his rookie fantasy value is most likely to lie.

He is expected to be a second or even a third-round pick. At his Pro day,  Jason Garrett was the only NFL head coach in attendance and it was just a local drive for him. Five WR coaches showed up and scouts from 25 teams were there. The Cowboys are speculated to consider a wideout in the first round if  Calvin Ridley falls that far but could look to Sutton in the second round if they go for a different position with their first pick.

Sutton will go late enough that any NFL team is going to have a shot at him. If he lands with a team that already has a well-established No. 1 wideout but no clear No. 2, he could offer some fantasy value even as a rookie.