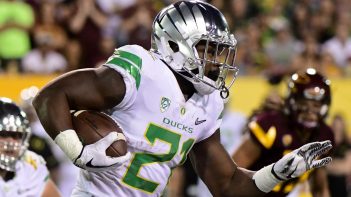 Royce Freeman ended his stellar career at Oregon with 6,435 total yards and 64 touchdowns.  He owns the Pac-12 all-time record for scoring. He averaged 5.9 yards per carry over his four years. So long as he was not injured, he rushed for over 1,300 yards every year. He started as a freshman and earned the Pac-12 Offensive Rookie of the Year in 2014.

Freeman hit his stride as a sophomore when he rushed for 1,836 yards but then injured his knee as a junior. He returned for his senior season to look better for the draft. He bounced back as a senior with his third season of more than 15 touchdowns.

Freeman is a big man at 238 pounds but is surprisingly fast for his size. He was the starter for three years at Imperial High School in Imperial, California where he topped 2,000 rushing yards in every season. He ended with 7,606 rushing yards on 645 carries and ran for 111 touchdowns.

At Oregon, he was a four-year starter and totaled 947 rushes for 5,621 yards and 60 touchdowns. Over his eight years of schooling, he totaled 13,227 rushing yards. If he replicates that in the NFL, he’d be seventh all-time in rushing yards. His 171 touchdowns would rank No. 1 if it was in the NFL.

Freeman does not lack for experience.

This is an  RB-rich draft and that means Freeman falls more than he would in a normal year. He gets marked down for not making better use of his size since he is not a bruising runner. But he’s reasonably fast and quick, and he offers a proven ability to move the sticks and reach the end zone.

He caught 79 passes at Oregon and can stay on the field all three downs, though some scouts look at his size and consider him more as a two-down back. His heavy use over the last eight years is a concern and injuring his knee as a junior could be a red flag.

But his production has been stellar and he never had a down year other than due to injury. Freeman is expected to go in the second or third round of the NFL draft. Teams that have been linked to him include the 49ers, Seahawks, Lions and Colts. He offers the chance for an NFL team to address a need with their first-round pick and yet still access good quality at running back with Freeman somewhere in the top 100 picks.