Anyone can draft a boring, run-of-the-mill fantasy football roster and finish in the middle of the pack. Gamers who refuse to accept mediocrity and are unafraid of bringing up the rear understand calculated risks are necessary to build an explosive winner. Unfortunately, those chances can backfire. Mitigating risk is important, but savvy drafters don’t get bogged down by fear of failure.

The following players have varying degrees of upside to go along with a mixture of downside. Some are proven studs who come with a certain bust factor based on draft placement, while many are unheralded and offer a big bang for the buck.

Note: All ADP figures are from 12-team, PPR scoring, unless otherwise stated.

Look, the idea here isn’t Rodgers should be a seventh-rounder or some nonsense, but he absolutely comes with serious risk. Injuries are the biggest peril, and it wouldn’t be fair to expect no regression from the receiving corps after Rodgers’ go-to guy, Jordy Nelson, was released. Jimmy Graham is an intriguing addition at tight end, albeit in an offense not known to rely on the position, and in his age-32 season.

A return to offensive coordinator Joe Philbin could come with a few kinks to be worked out early on, as we’ve seen by Rodgers going on an interception spree to open training camp. Furthermore, Green Bay’s running game has issues of its own. Over the past few years, the Packers’ offensive line has routinely battled injuries. Rodgers is closer to backing his way into being the first chosen passer than confidently seizing it. Of course, elite talent tends to prevail in the face of adversity.

Watson was nothing short of phenomenal in 2017, accounting for 21 touchdowns in slightly more than six games. The weaponry is promising, and Watson has a competent running game to fall back on in case he is slow to rebound, which also could work against his fantasy value.

Coming off of knee reconstruction, how mobile will he be in the first half of the season? Can the Texans do a better job of protecting him after giving up what extrapolated to almost 47 sacks? Watson is exciting, no doubt, but as the second quarterback chosen, gamers are taking a huge risk with the hope of attaining a massive reward.

Going, on average, as the ninth quarterback in fantasy drafts, Jimmy G. is being viewed as a bona fide starter. There isn’t anything wrong with treating him this way as long as a backup capable of starting is also chosen. It requires spending a pick on a second passer earlier than desired.

The 49ers have the coaching staff in place to make the most of an uninspiring cast of receivers. Garoppolo looked the part in his limited run with the Niners a year ago, making his meteoric fantasy rise understandable. Throwing a TD every 17.1 completions again would be a ratio to underpin fantasy failure, though; the offense must generate more scoring opportunities. It’s entirely possible Garoppolo will amass considerable yardage and fail to top 25 touchdowns strikes.

The main thought process here is the Cowboys have little to work with in the receiving corps to keep defenses honest, and the offensive like could take a small step backward. Furthermore, the blocking lost with Jason Witten’s retirement will be missed. The silver lining with Elliott is raw talent. He’s a gifted player who can post quality numbers, but it might not be pretty. He certainly will go in the top five picks, so understand what you’re getting.

After missing all but one game last year, the 2016 fantasy MVP returns to a new offensive system that features either a fragile journeyman or a rookie. The receiving corps could struggle mightily, which will allow defenses to crowd the box. Johnson, if we’re being objective, is the current definition of a one-year wonder. We simply do not know if he will ever be more than just a dude at this point. While he was so dynamic in ’16 that this notion is seemingly unfathomable, it deserves consideration. Besides, after such a good year, the odds of him coming close are extremely low. That truly was a career year for the overwhelming majority of RBs. Unfortunately, if an owner wants to find out for themselves if he is indeed special, Johnson drafters will be required to invest heavily.

His ability to return from a rebuilt knee is the foremost concern when drafting Cook, which isn’t news to anyone. The offensive line has undergone minor but noteworthy change, and the calls will be made by a new man, John DeFilippo, who has one year of experience as an NFL coordinator. Another factor possibly working against Cook is the addition of Kirk Cousins. Will DeFilippo become too enamored by the quarterback and rely extensively on the passing game?

Reports suggest Cook is ahead of schedule, which is encouraging, though he really offers more downside than up as a high second-rounder. In the event he falls a round, consider the versatile back and look to stabilize your RB corps in case he falters. Feel free to target Cook if your belief is Cousins only helps, and the Florida State star is poised to overcome the injury. No Jerick McKinnon should ensure Cook has a steady third-down role, yet Latavius Murray may steal a few touchdowns.

The prolific McCoy turned 30 in July and is coming off of the lowest single-season yards-per-carry average of his NFL career (4.0). The Bills made wholesale changes along the offensive line, losing three starters from 2017. A rookie quarterback is likely to assume the starting chores, and this offense’s receiving corps doesn’t threaten defenses enough to prevent stacked boxes. He isn’t 100 percent in the clear after an off-field accusation that could land him in hot water with the league.

Outside of two seasons in his illustrious career, McCoy has not been much of a touchdown machine. Regression should be expected, although the wheels probably won’t fall off the wagon in ’18. Given his versatility, Shady will remain active in the passing game and shoulder the offense as (presumably) Josh Allen finds his way.

Even though Hill is an exceptional athlete and a special player, he doesn’t come without risk. The move from Alex Smith to Patrick Mahomes should help, on paper, but what if the latter struggles to get his game on track?

KC has a powerful rushing attack on which to fall back, and Hill now has competition from Sammy Watkins, particularly for downfield looks. The brightest point of interest here should be Mahomes’ arm strength, especially on the run. His mobility allows players of Hill’s mold shake free and create huge gains. While Hill may disappear at times, and his second-year passer is untested, KC boasts one of the most explosive receiver tandems in the game.

Following consecutive seasons with more than 1,000 yards and 11 total touchdowns to begin his career, Cooper was dreadful in 2017. An offensive coordinator change didn’t help, but the former Crimson Tide star couldn’t catch a cold and battled injuries.

Wipe the slate clean. It’s a new season, featuring the return of offensive-minded head coach Jon Gruden. Cooper has more than enough talent to right the ship, and Gruden is committed to seeing it through. The addition of Jordy Nelson can help take pressure off of Cooper; the same can be said for Martavis Bryant’s inclusion. All of that said, Cooper’s dismal 2017 season and case of the dropsies, which has plagued him at times since entering the league, cannot be overlooked.

Ridley has drawn rave reviews in rookie minicamp, even if he is wearing just shorts. The positive is he will enter an established offense with a quality quarterback and doesn’t have to be the man. The other side of the coin highlights Ridley being a role player in an offense with several weapons, including one that will hog nearly 150 targets.

An injury to Julio Jones would surprise exactly no one, and Ridley simply outplaying Mohamed Sanu in the upcoming months could relegate the veteran to a reduced role. The Alabama standout’s ADP isn’t problematic, but some early drafts have seen him go as early as the sixth round — creating too much risk and removing value.

Tom Brady could be included in this analysis for similar reasons. With Gronk, however, the overpowering concern is his health. He takes too many big hits and has endured a litany of injuries. Speaking of Brady, though, just what can gamers expect from Gronkowski if Tom Terrific were to suffer a serious injury of his own? Despite so many exciting, young tight ends in 2018, Gronkowski, even as a third-round pick, is still worth the risk if gamers are wise to secure a backup.

Finally! After several seasons of hype, accompanied by sheer disappointment, Reed is going at a palatable market price. New quarterback Alex Smith has worked well with tight ends his entire career, and the Redskins should be a more complete offense after drafting running back Derrius Guice. This will create more play-action passing situations and alleviate some pressure on Reed. Washington’s receiving corps is suspect, which is another reason to like the proven tight end. In a world where his health is his top foe, Reed’s current ADP makes him a worthwhile risk-reward gamble. 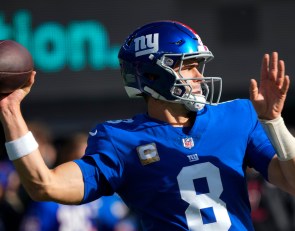