Fantasy football draft prep: When to take a tight end

Fantasy football draft prep: When to take a tight end

Note: Our “draft prep” series is generally intended to an audience with limited fantasy football experience.

Just a few years ago, tight ends were among the deepest of positions, but there is a top-heavy lean followed by a crop of “could-be” talents this year. How gamers choose to construct a team in the first few rounds tends to steer when most tight ends are added.

The first half of drafts

The only tight end with an average draft position (ADP) earlier than Round 3 is the New England Patriots’ Rob Gronkowski. While he is capable of dominating the position, Gronk is a glaring injury risk. There’s also the concern of what happens if Tom Brady finally proves to be mortal at age 41. Choosing Gronkowski in the second, where his ADP checks in as the round’s 11th pick, requires a leap of faith and a personal decision of comfort with the selection. Screwing up a pick that early can drastically hinder one’s odds of securing a championship.

Kansas City’s Travis Kelce comes next off the board, about a half of a round later (3:08). He is the only tight end with as high of a ceiling as Gronk but a much higher floor, even with a first-time starting quarterback under center. The position always will be a staple in Andy Reid’s system.

Over the next two rounds, fantasy owners opt for three other safe choices in Zach Ertz (4:04), Jimmy Graham (5:05) and Greg Olsen (5:12). Sure, all three have experienced injuries in recent years, but each one is as rock-solid as can be on the field. Each one also plays in proven offenses with three of the best passers in the game.

That two-round window could realistically be expanded to four, with the lone exception of Evan Engram (6:05). The second-year New York Giant looked special as a rookie and warrants this high of a selection. Objectively, we have seen only one year. Plus, Odell Beckham Jr. is healthy, and Saquon Barkley will steal targets. The two other players in this extended safety corridor includes Minnesota Vikings tight end Kyle Rudolph (6:12) and veteran Delanie Walker (7:05), of the Tennessee Titans. Both players are in tight end-friendly situations, and while neither will be a world-beater in fantasy, they won’t hurt you without suffering an injury.

After Walker, the fireworks begin. The board looks as dicey as ever, with a mixture of retreads, “what ifs,” and unproven talent. Jordan Reed (8:03) and Tyler Eifert (12:11) both fit the first two categories, as injuries have robbed them of elite-level play. What if they stay healthy, though? Both players have loads of talent and are in wonderful situations. Don’t be so quick to write off their fantasy prospects.

Philadelphia’s Trey Burton (8:07), San Francisco’s George Kittle (10:02) and Tampa Bay’s O.J. Howard (13:11) have the skill set needed to take their respective games to the next level. However, none of them are safe, so it comes down to one’s willingness to assume risk and cull the wire if you’re wrong.

Fantasy football draft prep: When to take a quarterback

Mixed in to this slotting of players is the Indianapolis Colts’ Jack Doyle (11:03). He is returning from a career year without Andrew Luck, and it’s entirely likely he takes a considerable step backward in 2018. Indy has Luck back and several short-area weapons to interfere with Doyle’s target count.

The best choices of the group are Clay and Seferian-Jenkins. Clay has demonstrated the ability to play through injury and is the most reliable weapon in a Buffalo Bills passing game that will be lead by an inexperienced passer one way or another. Jacksonville provides a fine setting for the rededicated, sober Seferian-Jenkins to flourish.

Understand construction models around running backs and receivers play the largest role in determining when drafting a tight end is best for a roster. Teams with impressive core strength at the two positions have the ability to take fliers on tight ends. Players in smaller leagues shouldn’t feel compelled to take a second tight end after choosing a stud.

Doubling on the position in the second half of drafts is perfectly fine, and if your team is strong enough, there’s nothing wrong with taking a pair of risk-reward types rather than blending in a safer target.

The position is volatile. We witnessed this last year, as emphasized by the failure rate of 50 percent of the top 10 players chosen per 2017 ADP. Given this nature, waiting on the position is advisable. Choose someone best suited for your league’s scoring system, specifically if bonus points are rewarded for receptions.

Drafting one of Gronk, Kelce, Ertz, Olsen and Graham works well for owners not interested in worrying about the position each week. More daring players should have no issue taking chances on the less heralded tight ends with upside. 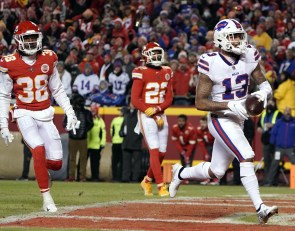