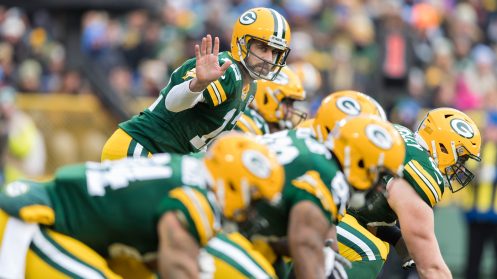 We profiled him last year in our Titans coaching change piece, so here’s a little rehash on his background:

The 38-year-old LaFleur was a collegiate wide receiver and quarterback but never made it into the NFL. He spent from 2003-07 as an offensive assistant at several small colleges and transferred to the NFL in 2008 to become an offensive quality control coach for the Texans.

He made his way to the Washington Redskins for the 2010-13 seasons as quarterbacks coach prior to holding the same position for one year at Notre Dame. He returned to the NFL in 2015 to spend a pair of seasons in Atlanta, once again coaching quarterbacks, and then the Los Angeles Rams hired him in 2017 to coordinate the offense.

It is not particularly common to see a defensive-minded, first-year head coach with a single season of experience as a defensive playcaller to hire an offensive coordinator towing as much experience in his own right. Generally, young coaches lean on seasoned coaches. There is no science saying one way is the right path, and we saw a pair of fresh offensive minds in LaFleur and Rams head coach Sean McVay create the most prolific offense in 2017.

Even though LaFleur didn’t call the plays last year, his influence and history of working with several great offensive minds cannot go unnoticed. Los Angeles became the first team in modern-era football to go from last to first in offensive points per game, scoring 14.0 a contest in 2016 to 29.9 under McVay/LaFleur. His background working with quarterbacks was evident in the practically overnight turnaround of Jared Goff, and running back Todd Gurley was unstoppable on his way to a league-best 2,093 scrimmage yards.

LaFleur has history working with different types of quarterbacks, ranging from the marvelous rookie season of Robert Griffin III to a conventional pocket-passer in Matt Ryan during an MVP campaign.

For starters, he’s now the ripe old age of 39. Joking aside, what did we learn from his lone NFL season as a true playcaller?

Not a tremendous amount.

LaFleur was hamstrung by a disappointing and battered offensive line and, more prominently, a quarterback whose own injury woes ultimately cost the Titans a legitimate shot at the postseason season.

Schematically, we saw LaFleur likes to run motion plays in the pre-snap and is perfectly comfortable with incorporating elements of the wildcat. What really stood out was his preference for run-pass options (RPOs), a play design that allows the quarterback to make a split-second decision to either hand it off or execute a quick throw if the matchup suits this choice. The system works best when a quarterback is cerebral and understands what the defense is showing as fast or even before it unfolds. That’s a positive check in the Aaron Rodgers column.

There’s no question Rodgers will be the most gifted quarterback with whom LaFleur has worked, and it will be interesting to see how the relationship dynamic unfolds after reports suggesting Rodgers has far more pull in the organization than many had once perceived.

Focusing on something more tangible is a better use of this space, however. The primary area of concern is the running game. McCarthy never quite understood how to get the most out of his talented backfield of Aaron Jones and Jamaal Williams. Tennessee employed a two-back system for most of 2018 until it became obvious Derrick Henry was the better fit late in the year. LaFleur cannot fall into that trap once again, and after how seldom the explosive Jones had been utilized at times under McCarthy, one can be sure the fan base and local-area media won’t let it go unnoticed.

In 2018, Tennessee proved to be extremely balanced in its playcalling, finishing second behind Seattle for rushing percentage of plays called at 51. Green Bay, conversely, ranked second from the bottom in balance at just 34.2 percent of plays coming on the ground.

While it may not be official yet, one can safely presume LaFleur will not give up the playcalling duties, even if he hires an offensive coordinator. (Update: Nathaniel Hackett was hired as the OC, although LaFleur will indeed call the plays. Expect Hackett to work closely with Rodgers and implementing weekly game plans.) This follows in the successful footsteps of recent offensive minds moving on to become to head coaches in McVay and Matt Nagy in Chicago. One could argue the same, but without as much defined success, for Kyle Shanahan. Defensively, it looks like coordinator Mike Pettine is favored to return.

The Packers need to inject more speed in the front seven on defense and see a significant leap in maturation among the young members of the secondary or any coach will be doomed. Star linebacker Clay Matthews, 33, is an impending free agent, as is fellow linebacker Jake Ryan.

On offense, more creativity will go a long way, especially when it comes to getting Rodgers on the move to maximize his skill set the best. If nothing else, the biggest takeaway from LaFleur’s time with the Titans is his ability to adapt — it didn’t necessarily take shape right away, but it happened — something that is a long-standing critique of his predecessor in Green Bay.

A year after Davante Adams was the top receiver in PPR all while Rodgers took a nose dive, it will be incumbent upon LaFleur to tweak to their strengths rather than make wholesale changes. He isn’t afraid to push the ball down the field, and the new head man finally has a quarterback capable of do such a thing.

Long-time Packers receiver Randall Cobb is a free agent in March and seems likely to be wearing different colors in ’19. The 2018 draft class infused this receiving corps with a trio of potential playmakers. While the while be playing in their third offensive system in as many seasons, there is an obvious pool of WR talent entering Year 2.

As mentioned, the running game will become a stronger focus of this offense as long as the defense permits within any given contest. Expect fewer bumps in the road than LaFleur experienced last year in Tennessee, and the offensive line has the potential to be one of the league’s better units.

Tight end Jimmy Graham should return after what can only be called a disappointing season. Offensive coordinator (turned interim head coach) Joe Philbin didn’t seem to show any creativity in how Graham was deployed and failed to consistently utilize him to his strengths. Even still, in an age-33 season, Graham’s fantasy hourglass is running out of sand.

Expect a dynamic system that will return Rodgers to consistent fantasy glory and give gamers more confidence in deploying Jones in 2019.