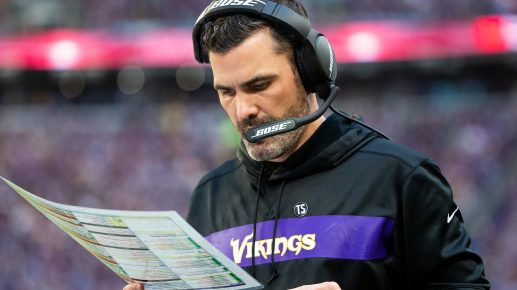 The Minnesota Vikings struggled with consistency through the 2018 season and failed to make the playoffs after paying a king’s ransom to quarterback Kirk Cousins in the offseason.

One big source of the team’s problems was its inability to effectively run the football a year after posting 501 carries. The 2018 version of this offense, run for 13 games by John DeFilippo, racked up just 274 carries in his time calling the plays. Star running back Dalvin Cook battled hamstring injuries much of the year after making his return from a 2017 torn anterior cruciate ligament, and there is only so much the one-dimensional Latavius Murray can offer a backfield. DeFilippo was shown the door, and quarterbacks coach Kevin Stefanski was promoted to the playcaller’s chair for the final three games after head coach Mike Zimmer finally had enough of the offense’s lack of a running game.

In 2006, Stefanski joined the Vikings as an assistant to the head coach, which was Brad Childress. Stefanski would be united with current New York Giants head coach Pat Shurmur in 2016, when Shurmur served as Zimmer’s tight ends coach and interim offensive coordinator. Following a promotion to the full-time OC gig in 2017, Shurmur was hired by the Giants. His first target for offensive coordinator was — you guessed it — Stefanski. The Vikings blocked the move, and Mike Shula took the job instead.

Stefanski has coached in various capacities for 13 years with the Vikings, which is impressive for a 36-year-old assistant. He coached the running backs in 2016 and the tight ends for two years before that position. Essentially, he has had his hands in just about every level of the offense under Zimmer.

A quick examination of Stefanski’s three-game spell as a playcaller looks like this: The opponents were Miami, Detroit and Chicago.

Minnesota ran a whopping 40 times against the Dolphins, going for season-best 41 offensive points. Cook looked like the standout version of his rookie self, ripping off 136 yards and two touchdowns on just 19 carries. Murray added 68 yards and a score of his own.

The next week, Stefanski called 16 carries for Cook and 28 total rushing plays in a 24-9 road win. The game was called with more balance.

The Week 17 game didn’t quite follow such a script. Minnesota was down 13-10 entering the fourth quarter against the Bears and finished with just 15 total rushing attempts. Cook had only 11 carries for 39 yards.

In review, Stefanski averaged 27.67 rushing attempts per game in that window, which is a 24 percent increase from the offense under DeFilippo. The Vikings would finish 27th in rushing attempts on the year, and the three-game average of Stefanski’s commitment to the run would have been 11th had it perfectly extrapolated. Last year, Shurmur’s offense rank 31.3 times a contest (2nd).

The biggest takeaway from Stefanski’s time working with Shurmur and the connection they share is the former learned a key lesson from the latter: “It’s about the players, not the plays.” In other words, adaption is his key strength. The Shurmur offense, with Stefanski teaching Case Keenum, relied on the ground attack and put the quarterback in as many low-pressure, high-success situations as possible.

The obvious beneficiary of this full-time promotion is Cook. Not only will he be further removed from his ACL tear, he has a full offseason to learn the system — one that looks familiar based on his rookie season with Shurmur. Entering 2018, Cook was rehabbing the knee and didn’t get a chance to fully absorb the intricacies of the offense and get the timing down. We saw this dissipate as the year progressed and his health improved.

Cook may have new backfield mates with Latavius Murray and Ameer Abdullah facing unrestricted free agency in March. Murray could return and serve as a capable spell back. The offensive line needs some work, so pay attention to how this area of the roster is addressed. Cook, being a dual-threat back, finds his highest value in PPR leagues, and he is an easy pick in Round 1 for most gamers.

One ramification of the heavy emphasis on running the ball is the correlative reduction in targets for the receivers. In the last three weeks of the year, Stefon Diggs led the Vikes with 23 targets (7.67/game) and checked in as just the 20th receiver in terms of being most targeted. The early-season star, Adam Thielen, finished ice cold in the Twin Cities, seeing only 12 total targets in those three contests. Sixty-two receivers had more looks, including several who didn’t play in all of the games. For the season, Thielen ranked sixth in targets (9.7) in 16 outings and Diggs seventh (9.9) in 15 games. Both receivers check in as rock-solid No. 2 options in any format.

At tight end, Kyle Rudolph saw his share of the targets slightly increase. He had publicly praised Stefanski long before the long-time assistant was promoted to the interim OC job. Minnesota looked to Rudolph 5.67 times a game in those three weeks. He saw 64 targets in 13 games before Stefanski took over, averaging 4.9 under DeFilippo. The veteran should be a fringe TE1 in 2019 given the volatility of the position.

And, perhaps out of order, this brings us to Cousins. He finished ninth in fantasy points and fourth in passing attempts. The former Washington Redskin finished 22nd in attempts over the last three games, averaging 27.33 throws. Over the course of DeFilippo’s 13 games, Cousins averaged 40.3 attempts. Ben Roethlisberger ranked tops in the league with 42.2 lobs a week.

In 2018, 37 quarterbacks threw at least 100 balls. That 27.33 figure would extrapolate to dead last among starters. For as much as the Vikings will look to run the ball, they didn’t pay Cousins to hand it off every play. He has low-tier QB1 potential in 2019.