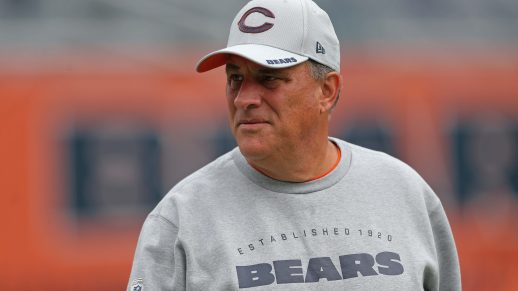 The Denver Broncos’ hiring of defensive-minded head coach Vic Fangio suggests John Elway is poised to give quarterback Case Keenum one more shot at being the guy. A world-class defensive coordinator, Fangio should find ways to get the most out of Denver’s defense to help alleviate pressure on Keenum.

Fangio came over after leading the Chicago Bears defense to No. 1 rankings in takeaways (36), interceptions (27), interceptions returned for touchdowns (5), lowest passer rating allowed (72.9) and plays of 20 yards or more permitted (46). The 2018 Bears set a franchise record for the fewest rushing yards allowed in a 16-game season.

The 60-year-old Fangio was the head defensive play-caller for the aforementioned Bears, Carolina Panthers, Indianapolis Colts, San Francisco 49ers and Houston Texans. He was a prized defensive assistant for the Baltimore Ravens from 2006-09, coaching linebackers in the final year.

While Fangio brought Chicago’s secondary coach of the last four years, Ed Donatell, to Denver with the title of defensive coordinator, the former will indeed call the plays. Donatell, a 27-year veteran coach, will have a role in game planning and tutelage.

The offensive coordinator spot was filled by Rich Scangarello. A long-time collegiate assistant and the 49ers quarterbacks coach the past two years, Scangarello was able to get the most out of poor positional situations in those seasons. C.J. Beathard looked competent in his sophomore year after Jimmy Garoppolo went down, and Nick Mullens flashed several times as he rose from obscurity. Even Jimmy G. was coached up quickly when he came over late last year in a trade.

As a play-caller, however, this will be Scangarello’s first year holding the position in the NFL. He previously was an offensive quality control coach for Atlanta (2015) and Oakland (2009), as well as being an offensive coordinator at three stops in the collegiate ranks (Wagner, Northern Arizona, Millsaps, UC-Davis, Carleton) spread over 2001 to ’16.

The 46-year-old is believed to favor a zone-blocking scheme in the running game and a creative offensive style reminiscient of his most recent boss, Kyle Shanahan. Expect movement of the quarterback, short and intermediate passing that relies on receivers to make plays after the catch, the involvement of running backs and tight ends, and play-action misdirects. Shanahan has deployed interesting personnel groupings in the alignment stage of the pre-snap read that eventually disperse to create mismatches in coverage and allow the quarterback to make coverage assessments.

Play-action is important to protecting Keenum from doing too much. In 2017, with Minnesota, his passer rating increased from 88.2 to 117.9 in play-action passing. The Broncos called such passing plays 16 percent of the time through the first six weeks, which was 12 percent less than in 2017, but the year-end result was the 11th-highest rate at 25 percent (T10). A strong running game is the key to convincing play-action, and if Phillip Lindsay (wrist) returns as anything close to what we say in 2018, Denver should be in good shape. Furthermore, don’t give up on Royce Freeman finding success in his second year.

Let’s take a look at Fangio’s defensive results in comparison to the league. The rankings reflect (lower number is better) where his teams ranked in each category.

While he did have several tough years, there are plenty of No. 1 rankings to be found. The data speaks for itself, especially given his long-term sustainability.

Aside from personnel concerns in the secondary, the defense shouldn’t be too much of a liability. Denver gave up consecutive 200-yard games, including three rushing TDs, in Weeks 5 and 6 before locking down the running backs until allowing 100-yard games from Nick Chubb (100) and Doug Martin (107) in Weeks 15 and 16, respectively. The Broncos finished as the 14th-worst defense in standard scoring and 17th in PPR vs. the position. Denver was a mostly neutral opponent, as well, against receivers, finishing 18th in PPR and 19th in standard.

A lack of takeaways (22) and only one defensive TD kept this unit in the cellar, rating as the eighth-weakest fantasy defense. Fangio should be able to get the most out of this group to create a respectable fantasy option in 2019, but expecting a turnaround into the top-10 of fantasy defenses is asking a bit much.

Keenum is no more than a stopgap for the Broncos, and there is no guarantee he even opens the year as the starting option. At his best, he is a low-tier matchup consideration or a target in leagues offering dual-quarterback deployment.

The backfield will be fun to observe in the offseason workouts and training camp. Lindsay looked every bit the part of a capable NFL starter before his broken wrist, and while Freeman was a letdown for overzealous fantasy drafters, he is not without utility. Look for a run-centric approach to keep the pressure off of Keenum, and if Shanahan’s style of divvying up the backfield is any model to use for what is to come under Scangarello, both backs will see a healthy share of touches. For now, consider Lindsay somewhere in the low-tier RB2 or quality flex neighborhood, and Freeman is a No. 4 or possible flex in deeper setups.

At receiver, the soon-to-be 32-year-old Emmanuel Sanders (Achilles) will be on the mend perhaps into the early portion of the season, depending on how well the recovery progresses. He enters the final year of his contract and carries a $12.94 million cap hit with only $2.69 mill in dead money should he get released. It is possible Denver restructures his deal.

Denver could opt to fully embrace its youth movement: Last year, it drafted Courtland Sutton in Round 2 and DaeSean Hamilton in the fourth — the future is bright for both players. There are a few borderline starting options scheduled to hit the open market in March. As things stand now, assuming Sutton and Hamilton enter the regular season as the starters, the former is a WR3 with No. 2 upside, and Hamilton has a shot at flex utility.

Tight end is a mess and must be addressed. Jake Butt suffered his third torn ACL and is in doubt to play again, or at least at a high level. It can be done, though. See Carolina linebacker Thomas Davis. Heuerman is not the answer, and 2018 fifth-round pick Troy Fumagalli missed the whole year with a sports hernia. Tyler Eifert and Jared Cook headline a rather pedestrian class of free-agent tight ends.

During the four-game skid to close out 2018, it looked like Vance Joseph lost the team. Sometimes all it takes is a change of leadership and not wholesale personnel manipulation. There will be a number of new faces, but most of the anticipated moves are necessary. In time, a no-nonsense coach like Fangio should get this team turned around. Until then, fantasy owners will be left with limited viable options.