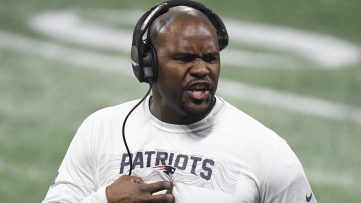 The Miami Dolphins turn to 37-year-old New England Patriots linebackers coach Brian Flores as the franchise’s next head coach, replacing the offensive-minded Adam Gase after three years with only one winning season.

Much has been made of the lack of overall success to come out of the Bill Belichick coaching tree, and while some of that criticism is just, it is difficult to fully blame the coaches who entered terrible personnel situations. It’s a quarterback-driven league, and without a bona fide starter, a coach of any background is destined to fail. That said, Miami must figure it out quickly to avoid Flores being tossed onto the scrapheap.

The Patriots hired Flores in 2004 as a member of the scouting department. He was moved into the role of assistant special teams coach in 2008 and was promoted to offensive assistant as well as the head special teams coach in 2010. In 2011 he moved to the defensive side of the ball, which was a natural spot for the former Boston College linebacker. Flores would coach the safeties from 2012-15 before moving to the linebackers in 2016. He didn’t gain the title of defensive coordinator in 2018 but called the plays — and he saved what was by far his best effort for the Super Bowl.

Miami is a team without an identity, and much of this stems from not having a dependable quarterback. Ryan Tannehill hasn’t matured into a trustworthy signal-caller, and injuries have made him a liability in other ways. Flores’ coaching staff will have to mold a group of young players and work with inferior talent to turn around this proud franchise. On defense, a youthful nucleus is mostly present, although an upgrade in the pass-rushing department is a must. Another cornerback to pair with Xavien Howard will be a priority, too.

Chad O’Shea is expected to come over from the Patriots with Flores as the offensive coordinator. The 46-year-old has 15 years of coaching experience without calling plays. He has been New England’s receivers coach since 2009. Previously, he held various assistant roles with coaching wideouts and special teams in Minnesota and Kansas City. He has learned under an array of offensive mindsets, including Dick Vermeil, Brad Childress and Josh McDaniels. While it is too early to tell what style of offense he is mostly likely to employ, O’Shea will have his work cut out with a dearth of talent across the offense.

Ten-year NFL assistant Patrick Graham is likely to be named defensive coordinator. It is unclear if he will call plays.

Free agency is poised to affect the defense the most. Miami has the following players scheduled to reach the open market in March, and their current ages are listed in parentheses: DE/LB Cameron Wake (37), DE William Hayes (34), OLB Stephone Anthony (27), Ziggy Hood (32), DT Sylvester Williams (30) and CB Tony Lippett (27). The offensive side of the ball could be without RB Frank Gore (36), RT Ja’Wuan James and C Travis Swanson (28). Backup quarterbacks David Fales and Brock Osweiler are also set to become free agents, along with reserve tight ends MarQueis Gray and A.J. Derby.

The Dolphins have to answer the major question at quarterback in a draft class that is not ideal to mine, and free agency offers effectively no one of note. A mostly unproven Teddy Bridgewater is arguably the top name, unless the front office feels Tyrod Taylor or Ryan Fitzpatrick is a serviceable upgrade from Tannehill for one year. Joe Flacco should be available upon his expected release, and he’s likely the top target from a stability standpoint. He, too, is merely a stopgap.

Running back Kenyan Drake shows promise but wasn’t utilized effectively by Gase’s staff. Provided Gore leaves or retires, this backfield should turn to a one-two punch of Drake and second-year man Kalen Ballage.

Wide receiver needs a complete overhaul. Former first-round pick DeVante Parker is likely gone, and he never materialized as a legitimate weapon. Danny Amendola is the elder statesman but offers little at this point in his career. Kenny Stills has wheels to get deep and does almost nothing else. Backups Isaiah Ford and Leonte Carroo have not developed into starter-worthy considerations. Tight end Mike Gesicki rarely flashed in 2018 as a rookie after being chosen in the second round. The jury obviously is still out in his case.

Unfortunately for the Dolphins, the class of impending free-agent wideouts is laughably thin. A 31-year-old Golden Tate headlines the class, and Randall Cobb is probably the next most recognizable name. To complicate the situation, Miami has the eighth-highest team salary cap at this time. Releasing Stills and Parker would free up roughly $16 million in much-need cap space. Axing Amendola would add another $6 mill to that figure.

We don’t know what Miami will do at quarterback, and it probably doesn’t matter. This will be addressed in detail as the situation unfolds. Regardless, the lack of wide receiver talent and a shaky offensive line makes anyone in this position unworthy of fantasy attention.

The backfield duo offers promise in fantasy football. Ballage is a big-bodied bruiser whose best value is in standard formats, whereas Drake’s skill set makes him a favored PPR type. The pair will be held back by the quarterback situation keeping defenses stacked around the line of scrimmage, and neither player is worth more than a flex buy on draft day.

Wideouts. Barf. … The current expectation is Amendola, Stills and Parker are all released, leaving the slate completely clean for 2019. It remains possible Amendola sticks around to help implement O’Shea’s teachings given his familiarity with his former position coach in New England. Like free agency, the draft doesn’t boast a wealthy of talent this year at the position. Anything Miami does here is likely just to get by for a year or so and warrants little to no serious fantasy consideration.

Gesicki has potential and will benefit from the receiving corps woes. The position is extremely volatile in fantasy, which also lends a helping hand to enhance his perceived worth. There’s a risk-reward decision to be made here, but he should be on the short list of potential breakout tight ends.

As anyone can tell, Flores is taking on a team in rebuilding mode. This one will take a year or two before Miami fields capable personnel and offers anything of importance in fantasy football.