Brown was highly productive for the two years that he started at Oklahoma and acquired the moniker “Hollywood” for his brash demeanor. He was the most dangerous player for the Sooners as a human highlight reel. His speed was so elite that his size was never a factor when he played.

He’s been compared to another undersized speed merchant that was overlooked when he came out of college – Antonio Brown. Oh yes, and not only do they share some comparable size, speed and production comparisons, but they are also cousins.

Marquise Brown appeared at the NFL Combine but did not work out due to a foot injury suffered in the Big 12 Championship game. Comparing him to the others in his position would have been ideal since Brown was insistent that he would have been the fastest receiver. He had previously been timed at 4.33 for his 40-time. He’s always been the fastest player on any football field. He’s a blur.

The difference is that this Brown will never make it to the sixth round. He may be gone by the second round.

Brown has also drawn comparisons to T.Y. Hilton and Tyreek Hill – both speedsters. He’ll be asked to gain more muscle in the NFL but there’s no denying that his size is far less of an issue with his elite quickness and ability to score on any play.

This is the sort of player that Al Davis would have traded up to pick back in the day. Brown’s outlook is to go by the end of the second round and he could sneak into the first if that one team covets him enough. His size will concern many teams to hold off as it did with his cousin Antonio (2010-6.26) and T.Y. Hilton (2012 – 3.29). And there are certainly far more instances of smaller players struggling to make the transition into the NFL.

But Brown played on very big stages and shined. He’s not going to be a great blocker for the rushing effort and he’s certainly not just a slot guy where so many smaller players end up. Brown will not make his mark catching short, contested passes over the middle.

Ideally, he ends up paired with one of the top wideouts so he can stretch the defense and make them pay if they don’t give him plenty of attention. And like T.Y. Hilton, Tyreek Hill, and Antonio Brown, he could end up as a No. 1 wideout. But there is hardly any guarantee unless you ask Brown directly.

One team that has been linked as a possible suitor – Oakland Raiders. Pairing him with his cousin Antonio would make for quite the family affair. 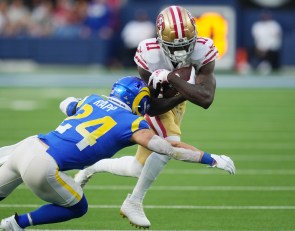