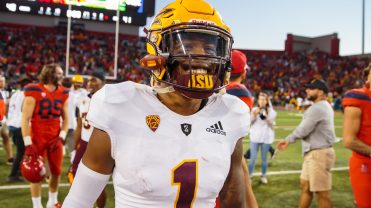 N’Keal Harry was a five-star recruit by the Sun Devils and declared for the NFL draft after starting for his first three seasons. He projects as a second or third-round pick to complement a No. 1 receiver. Harry offers a solid package of size and skills without being great in any one area.

He was named a Freshman All-American and then was First Team All-Conference as a sophomore when he totaled 82 receptions for 1,142 yards and eight scores.  He left a legacy behind as one of the best wideouts to ever play for Arizona State when he scored ten touchdowns and again broke 1,000 yards as a junior. He was instrumental in big wins over USC, Utah, and Arizona and opted to forgo his senior season.

Harry ended with nine games with over 100 yards including three of his final four. He led the team in receiving the last two seasons with no other receiver accounting for more than 44 catches for 449 yards last year.

N’Keal Harry has plenty of highlights from his college playing days and he often looked like he could step in and contribute as a No. 1 receiver in the NFL. But there are concerns that he’ll need at least a year or two to get into the flow of the game and improve his route running beyond deep routes down the sideline.

He is an athletic receiver with better than average size and strength. His stock hasn’t really risen in the spring and he projects to be a probable top ten wideout selection, but most expect him to end up near the end of the second round if not in the early third.

His return ability will likely see some use on punts. His fantasy value is more dynasty-related given the likelihood that he needs to season for a year or two. He has been likened to Devin Funchess but his ceiling should be higher. He has the tools and physical attributes to give him upside if he lands in the right spot and continues to develop.