Tony Pollard is flying up draft boards and undoubtedly deserves an earlier pick than Round 16 while Ezekiel Elliott remains away from the team. Austin Ekeler continues to rise with Melvin Gordon also holding out.

Opening as the No. 2 receiver in camp, Donte Moncrief‘s hype machine winds back up after a pair of disappointing seasons leading up to his fresh start in Pittsburgh.

Duke Johnson goes up 30 spots after the trade, but he’s nursing an injury and should see his stock come down some over the upcoming week. Miami has a backfield split forecasted closer to 50/50 than the previously believed share favoring Kenyan Drake over Kalen Ballage.

Carlos Hyde continues to get a residual bump from Damien Williams being banged up and flattering comments from Andy Reid. Wideout John Brown has drawn consistent praise in camp and is getting noticed outside of Buffalo.

Jordan Reed is finally getting some draft love after the consensus from Washington media says he looks like the same player fantasy owners fell in love with several years ago.

For the second straight week, we see a massive downward trend in quarterbacks. The belief here is more gamers are buying into the idea of waiting to draft the position.

Drake will share touches with Ballage. Robert Foster has not taken the leap some gamers had expected, and Jerick McKinnon suffered a setback in his return to the field.

James Washington should turn things around after a 10-place slide this past week. He will get a lift from a strong preseason showing in which he demonstrated just what he intended by losing a few pounds in the offseason.

Dallas Goedert has a calf strain that will likely cost him the rest of the preseason. Trey Burton remains on the mend from offseason core surgery, which has his stock the lowest it has been since 2017 drafts.

Confusion and a lack of production in the preseason has Ito Smith slowly trending the wrong direction. Backups Brian Hill and Qadree Ollison are still pacing outside of the top 20 rounds, but both players have risen recently. 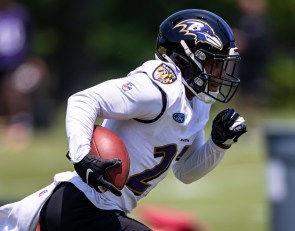