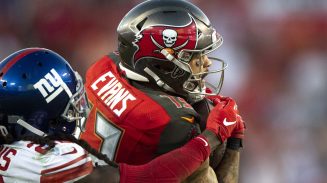 LeSean McCoy – Was questionable to play against the Ravens but not only suited up, but he also totaled 80 yards and two touchdowns, But he re-tweaked his ankle and left in the fourth quarter.  Damien Williams was already out with a sprained knee. But notable is that Darwin Thompson did not play a relief role or even change of pace. Darrel Williams was called up and ran for 62 yards on nine carries and added five receptions for 47 yards. Williams will be removed from waiver wires this week and will play a role if either Damien Williams or LeSean McCoy cannot play. The lack of use of Thompson was surprising but the results say he’s further down the depth chart than he seemed.

Saquon Barkley – The early speculation is that he has a high-ankle sprain. That typically requires weeks to heal and potentially can last a month or two depending on the severity. He’ll get the MRI on Monday. Wayne Gallman took over but only ran for 13 yards on five carries. The Giants have home games against the Redskins next, but then the Vikings, at New England and the Cardinals. Gallman is worth owning, but he’s no Barkley.

QB Daniel Jones – The rookie did himself plenty proud in his debut. He threw for 336 yards and two touchdowns, plus ran for 28 yards and two other scores. He already had two receivers with over 100 yards. The schedule is not a friend and losing Saquon Barkley for any amount of time will have a negative impact. Each week there is more game film on him as well. But it was such an impressive debut that he’ll leave all the waiver wires this week.

QB Kyle Allen – The second-year backup in Carolina took the start against the Cardinals and totaled 261 passing yards and four touchdowns. He benefitted from Christian McCaffrey having another monster game but threw scores to Greg Olsen (2), Curtis Samuel and D.J. Moore. But Cam Newton may be over his foot sprain as early as this week. Allen is only worth a stash for the Newton owner.

QB Teddy Bridgewater – While he passed for two touchdowns in Seattle, he only totaled 177 yards. Worse yet, he faces the Cowboys, Buccaneers, Jaguars, and Bears next. He offers only minimal value even with another seven or more starts to go.

RB Tony Pollard – He was dropped in many leagues once Ezekiel Elliott resumed his workhorse role. But he was the seventh-best back this week with 128 yards and a score playing mop up against the Dolphins. Aside from his potential value as an injury replacement, he could offer some reliable value in late-season games when they rest Elliott.

RB Rex Burkhead – James White was out to witness the birth of a child and Burkhead ended with 47 yards and a score on 11 runs plus caught six passes for 22 yards. But White will return and Sony Michel had an off day in a game that was never in question. Burkhead is still the least reliable of the three backs and only deserves consideration if one of the other backs are out.

RB Alexander Mattison – Like Pollard, he mopped up in the Raiders game and ended with 58 yards and a score on 12 carries. He’ll only offer a flex play when the Vikings have a light matchup at home, but he demonstrated what he could do should Dalvin Cook become injured as he has each previous season.

WR Phillip Dorsett – Needs to be back on rosters with Antonio Brown lost in the Twitter-verse, Dorsett is back to starting and scored on his six catches for 53 yards in the win over the Jets.

WR Cole Beasley – Turned in eight catches for 48 yards in the win over the  Bengals. He gained 83 yards on four receptions in Week 2. Josh Allen is getting used to relying on his new slot receiver and that offers value in reception-point leagues.

TE Jordan Akin – The Texans second-year tight end caught two touchdowns on his three catches for 73 yards but those are his only career scores. Consider it just an anomaly for now.

RB Joe Mixon – Ran for 61 yards on 15 carries and caught two passes for 34 yards and a score in his first 2019 performance worth a fantasy start. And it was on the road in Buffalo. But very tough games loom next with @PIT, ARI, @BAL, JAC and @LAR.

RB Frank Gore – Gained 76 yards and a score on 14 carries versus the Bengals and added 13 yards on two catches.  Plenty good enough to merit a split workload when Devin Singletary returns.

WR Marquez Valdes-Scantling – Was quiet against the Bears and Vikings, but turned in a team-high ten targets for six catches and 99 yards. He also scored with a 40-yard reception. Geronimo Allison only caught one pass for a one-yard loss. MVS finally showed up in the new offense thanks to not facing an elite secondary. That bodes well next week hosting the Eagles.

RB Devonta Freeman –  Ito Smith was out with a concussion and Freeman ran 16 times for 88 yards and even caught three short passes. That’s easily his best game of the year.

WR Zach Pascal – Became the starter when Devin Funchess was lost and ended Week 3 with a touchdown on his two catches for 53 yards. Tough to start yet, but upcoming games of OAK, @KC, and HOU could be interesting.

RB Miles Sanders – The Eagles will never quit their committee backfield, but the rookie Sanders ran for 53 yards on 13 carries and gained 73 yards on two catches (40 and 33 yards). He won’t take over, but he’ll get at least as much work or more with that great of a showing.

WR Christian Kirk – While he has yet to score this year, Kyler Murray connected with Kirk in Week 2 for a team-high six catches for 114 yards and again in Week 3 with ten receptions for 59 yards.

TE O.J. Howard – He only caught three passes in the loss to the Giants but gained 66 yards. Plus his four targets were tied with Chris Godwin for the team-high after Mike Evan’s 15 passes. It is at least a step in the right direction and it wasn’t another week with no catches.

RB Alvin Kamara – In the absence of Drew Brees, the Saints turned mostly to Kamara to move the ball. He rushed for 69 yards and one score plus led the team with nine catches for 92 yards and one score. That’s great for Week 3 but if Teddy Bridgewater doesn’t connect better with his other receivers, Kamara will have a tougher time this next month playing DAL, TB, @JAC and @CHI.

WR Diontae Johnson – Mason Rudolph’s debut did not go well but at least he found JuJu Smith-Schuster for a long score and connected with Johnson for 52 yards and a touchdown on three catches. His six targets were second only to Smith-Schuster and James Washington only managed 14 yards on two catches.

Mike Evans  –  Granted, it happened in a brutal loss, but the Buccaneers No. 1 wideout made up for a slow start. After two weeks, Evans only totaled six catches for 89 yards with no scores. He ended the Giants matchup with eight receptions for 190 yard and three touchdowns. He scored all three by halftime. His final 44-yard catch with seconds left should have been good enough for a winning field goal. No NFL win, but Evans helped dole out losses in plenty of fantasy leagues this week.