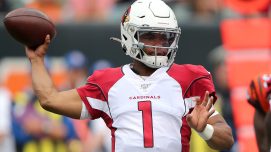 We’re more than a quarter of the way through the NFL season and nearly halfway through the fantasy regular season so no better time than the present to take stock of where the league’s top skill-position rookies stand.

Here’s the good, the not-so-good and the rest-of-season fantasy outlook for seven key first-year players …

The good: Murray emerged from Sunday’s action as fantasy’s 10th-ranked QB overall in terms of total points (114.8 Huddle Performance scoring) and has finished with at least 20.8 points in each of the last three weeks. And credit much of that to his legs. After only rushing for 17 yards in his first two games, Murray has stepped things up significantly on the ground of late with 189 yards and two TDs over those last three contests.

The not-so-good: Despite ranking fourth in the league in attempts with 201, Murray ranks sixth in completions (126), only 11th in passing yards (1,324) and is tied for 27th with just four aerial scores while tossing just as many interceptions. And two of his four TD passes came in Week 1, meaning he’s totaled only two over his last four contests.

Outlook: Working under a first-time NFL head coach in Kliff Kingsbury, Murray and the Arizona offense are still finding their way with their 20-points-per-game average ranking 21st in the league coming out of play Sunday. The best fantasy sign is that Murray has picked things with his legs of late, and overall he now trails only the Ravens’ Lamar Jackson (308) among QBs on the season with his 206 rushing yards. If things pick up through the air just a little – and they should – Murray should finish as low-end QB1.

The good: Danny Dimes’ Week 3 starting debut was simply smashing as he finished as fantasy’s No. 2 QB on the week (39.6 points), completing 23-of-36 attempts for 336 yards and two TDs while rushing for 28 yards and more scores in a 32-31 shootout win over the Bucs.

The not-so-good: Jones has only totaled 32.9 points in the two ensuing games, throwing for 407 yards, three TDs and rushing for 45 yards. All three of Jones’ interceptions also have come in the last two games, and he was far from Dime-like Sunday against the toughest defense (Vikings) he’s yet to face, completing a season-low 55.3 percent of his passes while being sacked four times.

Outlook: Jones supporting skill cast is getting better with WR Golden Tate debuting Sunday and stud RB Saquon Barkley likely returning early from injury over the next few weeks. Still, Jones’ Week 3 explosion set expectations way too high, and things might get worse before they get better over the next two months or so with the Giants facing fantasy QB unfriendly matchups against the Patriots, Lions, Cowboys, Jets and Bears all before Thanksgiving. That takes us through most of the fantasy regular season, and Jones can’t be counted on as anything more than a low-end QB2 through that stretch.

The good: The first-round pick has had two elite weeks, rushing for pair of scores while totaling at least 23.3 fantasy points (standard scoring) in Weeks 1 and 5. The latest came Sunday in London when Jacobs carved up the Bears’ fearsome defense for a season-high 123 rushing yards and the two scores while adding 20 more yards on three catches. Overall, that boosted Jacobs to seventh (74.7 points standard) and 14th (80.7 PPR), respectively, in the overall total points fantasy running back ranks.

The not-so-good: In Jacobs’ other three games (Weeks 2-4), he averaged 13.6 touches, 83.7 yards and 8.4 fantasy points (standard scoring) and hasn’t been involved as a receiver nearly as much as hoped with only six catches for 77 yards on nine targets so far.

Outlook: Over the Raiders’ Week 6 bye, Jon Gruden and staff will invariably have to take notice that Jacobs’ three best games not-so-coincidentally took place in the team’s three wins, and he should see larger weekly workloads going forward. If his passing-game work picks up as well, he has definite RB1 staying power.

The good: The third-round pick from Iowa State has led the Bears’ running backs in rushes and touches in each of the last four games and has accounted for 72.6 percent (69) of the team’s RB rushing attempts on the season while also catching nine of his 13 targets for 72 yards. He is the Bears’ goal-line back, and he’s the only Chicago player with a ground TD on the season, scoring on a pair of 1-yard runs.

The not-so-good: Montgomery has been less-than-efficient, averaging only 3.26 yards per carry and 3.81 yards per touch while totaling 297 yards in five games. He’s also had his two lowest touch counts (seven in Week 1 and 12 in Week 5) in the Bears’ two losses while fellow RB Tarik Cohen has seen his two highest touch counts (eight and 10) in those same two contests, signaling that perhaps Montgomery’s workload could be more game script dependent than we’d like.

Outlook: Montgomery enters the Bears’ Week 6 bye ranking as a low-end RB3 in both standard scoring and PPR formats. But a peek at The Huddle’s Fantasy Strength of Schedule tool reveals that Montgomery and the Bears don’t face a negative RB matchup in Weeks 10-16, meaning he could be a decent buy-low trade target with Chicago heading into its bye.

The good: “Hollywood” was the first wide receiver to come off off the board in this spring’s NFL Draft, and he showed why in his NFL debut, scorching the Dolphins with 147 yards and two TDs on five targets in Week 1. Through five contests, Brown is tied for the Ravens’ lead in targets (39) and receiving TDs (three), ranks second in receptions (21) and is pacing the squad with 326 receiving yards. He also ranked fifth in the league with 539 air yards as of Sunday, trailing only Mike Evans (603), Julio Jones (573), Keenan Allen (569) and Will Fuller (542).

The not-so-good: As is evidenced by his air yards total, Brown only has caught 53.8 percent of his targets – the worst catch rate among the 25 players with at least 39 targets. He only has managed nine receptions for 93 yards and one TD over the last three games while his receiving yards total has dipped or stayed the same in every contest since his Week 1 pyrotechnics. He salvaged his fantasy day Sunday with a scoring grab but he matched his season-low with five targets and only played 46 percent of the team’s offensive snaps in a tightly-contested game against the rival Steelers after playing at least 65 percent of the snaps in his three previous contests.

Outlook: Also as his air yards total indicates, Brown undoubtedly has a few more blowup games left in 2019, but overall he is trending in the wrong direction – as is his QB, Jackson, whose passing yardage totals have declined every week since throwing for 324 vs. Miami. Brown looks as if he’s settled in as a boom-or-bust weekly WR3/flex option.

The good: The third-round wideout from Ohio State has been the best fantasy option at any position for the 0-5 Redskins, leading the team in receiving yards (308), TDs (three) and yards per target (9.9) while drawing 31 targets in four games. He had a scoring grab and at least 17.2 PPR points in each of his first three games before posting a 3-51-0 receiving stat line on seven targets Sunday in a rugged matchup vs. the Patriots after coming back from a one-week hamstring injury absence. Overall, he ranks 13th among wide receivers with 491 air yards and his 15.8-yard average depth of target trails only Evans’ 15.9 among players with at least 30 targets.

The not-so-good: McLaurin’s 61.3-percent catch rate leaves much to be desired and a good deal of it might be attributed to playing in one of the league’s worst offenses with Washington already having used three quarterbacks and firing offensive-minded head coach Jay Gruden on Monday.

Outlook: Despite the above, McLaurin still ranks as a borderline WR1 (12th in standard, 13th in PPR) in terms of average fantasy points per game and there is no reason why he can’t finish the season in that range in total points if he stays relatively healthy with Washington figuring to resort to pass-heavy game scripts in the majority of their contests the rest of the way.

The good: The eighth overall pick in the draft is another rookie who dazzled in his NFL debut, catching six passes for 131 yards and a TD in Week 1 vs. the Cardinals, which was nothing short of a yardage record for a tight end in his first NFL game. He had a bye in Week 5 and ranks 11th overall among tight ends with 9.9 fantasy points at a position where rookies traditionally find it toughest to make a debut-season splash.

The not-so-good: Since drawing nine in Week 1, Hockenson only has been targeted 10 times since with just five receptions, 35 yards and one TD to show for it. More concerning, though, is that Hockenson was unable to finish his last game after suffering a concussion while trying to hurdle a tackler and his immediate status coming out of the team’s Week 5 bye is iffy. He also plays on a run-heavy team with the Lions ranking 26th in pass-play percentage (54.6) coming out of Sunday, and Detroit features a trio of talented wideouts (Kenny Golladay, Marvin Jones and Danny Amendola) who so far have commanded a combined 58.5 percent of QB Matthew Stafford’s targets.

Outlook: Hockenson has the skills to finish as a rare rookie TE1 but will need to rebound from the concussion and become a more involved part of the Lions’ offense when he does. Still, at a position where there remains a good amount of fantasy scarcity, Hockenson is a worthwhile talent to pin hopes on.