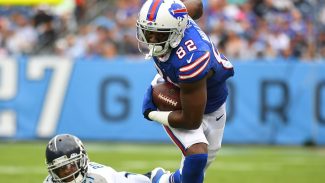 It’s Friday of Week 6 and time to look at some deeper players that may end up making a difference before the season is out. Also a quick look at what those highly-desired rookies are doing so far.

RB Reggie Bonnafon – The Panthers drafted Jordan Scarlet with their 5.16 pick this year and he was the primary back-up to Christian McCaffrey. That didn’t last. Bonnafon has earned the No. 2 role and his track there was anything but straight forward. At Louisville, he was a quarterback, wide receiver and eventually just a running back as a senior with 93 carries for 459 yards and 21 catches for 183 yards with eight total touchdowns. He was undrafted and a practice squad guy for 2018. Now that he’s focused on just being a running back, the 6-0, 216-pounder opened eyes in Week 5 with a 59-yard touchdown run to secure the win over the Jaguars. McCaffrey’s back-up is important to know since he leads the NFL with 105 carries and is No. 2 with 31 catches. Either McCaffrey slows down or he could get injured. In either case, Bonnafon would figure in.

RB Mark Walton – The 4.12 pick by the in 2018, the U. of Miami star has impressed his new team of the Dolphins enough to move up the depth chart to No. 2 after Kenyan Drake. Kalen Ballage has struggled and Walton took advantage of his opportunity. He was arrested for marijuana, battery and evading arrest from the police. He also had a felony gun charge. He was given a “second chance” deal that kept him out of prison but he was cut by the Bengals. Now signed with the Dolphins, he is trying to get back on track and getting attention. Drake could be gone next year and the Fins could see what Walton can do at some point. Miami is hardly the best place to start a career, but Walton isn’t taking anything for granted.  He was as good as 1,357 total yards and 15 touchdowns in a season as a Hurricane.

RB Benny Snell Jr. – The ex-Kentucky back ran for 1,449 yards and 16 touchdowns as a junior before entering the 2019 draft where he was the 4.20 pick by the Steelers. With Le’Veon Bell gone, they needed more depth. He only ran a 4.66 at the NFL Combine but has good size at 5-10, 224-pounds. He’s only carried the ball six times this season but Jaylen Samuels is out for a month or more after undergoing arthroscopic surgery on his knee. James Conner is the primary back, but Snell should see more work at least while Samuels is out. The Steelers go onto their bye in Week 7, but then play home games versus the Dolphins, Colts, and Rams. Snell is no speedster, but he can fill a role and if Conner was to also miss time, then the rookie’s stock would greatly increase.

WR D’haquille “Duke” Williams  – The Bills won at the Titans last week 14-7 while Duke Williams has his debut. He caught four passes for 29 yards and that included the 7-yard touchdown in the fourth quarter to win the game. The 6-3, 224-pounder played two years at Auburn and topped out with 45 catches for 730 yards and five scores in 2014 as a junior. He sprained an MCL late that year and then was dismissed from the team in 2015 after an incident at a club that included intoxication and assaulting multiple people. That left him undrafted in 2016. He ended up in the CFL where he led the league with 88 catches for 1,579 yards and 11 touchdowns. He brings much more height than any other Bills receiver and impressed them so much that they just traded Zay Jones to the Raiders and Williams is now the starting flanker. That may not be a bad thing considering that after their Week 6 bye, the Bills next five games are MIA, PHI, WAS, @CLE, and @MIA.

Rookie Running Backs – Here’s a look at the first three rounds of the NFL draft for running backs and where they are currently ranked in fantasy:

Only Jacobs and Montgomery have produced to an RB2 level although Montgomery’s usage has been very inconsistent. Singletary needs to stay healthy and he too could be special. But overall, Jacobs has been the only real difference-maker as a rookie so far and he’s the only one not stuck in a committee.

Rookie Wide Receivers – Here’s a look at the first three rounds of the NFL draft for wide receivers and where they are currently ranked in fantasy:

Marquise Brown only ranks so highly thanks to his Week 1 explosion that has so far been an extreme aberration. Terry McLaurin has been the biggest surprise while almost all the rest have been marginally productive at best. Some will improve with time, but every fantasy drafter felt a lot better when drafted them than do for now.