NOTE: These player rankings track a player’s value for the remainder of the season and are intended to be used as a tool, not necessarily a definitive guide to player valuation. The scoring system is performance PPR.

There is no exact science behind season-long rankings, considering all of the variables and situational uncertainties at work. Defensive teams have been added but will not have analysis.

Obviously Mahomes’ injury is the biggest news from Week 7, and with Andy Reid offering no timeline for a return all I can do is take what’s out there and base my outlook off of that. Three weeks has been floating around as a best-case scenario, which would mean a Week 11 return against the Chargers. That seems unlikely, though, since Week 12 is Kansas City’s bye. That would put Mahomes back on the field Dec. 1 against Oakland for the final five games. Of course, that could all change based on any number of factors: Mahomes’ recovery speed, Matt Moore’s performance, the state of the AFC West and more. For now, I’m dropping Mahomes into the teens amid loads of uncertainty.

Ryan suffered an injury of his own this week, hurting his ankle and not returning against the Rams. It’s not believed to be serious, and with Atlanta’s bye coming Week 9 it seems unlikely that Ryan would miss more than one game. As such, I’m keeping him in my top five even after losing Mohamed Sanu.

Last week I wrote how impressed I was by Rodgers’ play on Monday night, even if the stats weren’t off the page. Well, he accounted for six TDs Sunday without his top receiver. The numbers are starting to come around.

Carolina made the announcement that Kyle Allen will start in Week 8 and Cam Newton (foot) will continue to rehab. At this point you have to wonder how long Newton’s “rehab” will last.

I don’t like anything I’m seeing in Philadelphia right now, and though the problems aren’t all on Carson Wentz, he sure isn’t doing much to inspire confidence … Drew Brees (thumb) hopes to return this Sunday, though as well as Teddy Bridgewater has played it makes sense to give Brees another two weeks to heal up since the Saints’ bye comes in Week 9 … I’m dropping Jimmy Garoppolo, though it has nothing to do with Sunday’s mud-travaganza in DC. He’s been playing a pure game manager role most of this season and just isn’t putting up meaningful fantasy numbers. (Update: He will be revisited next week with the recent acquisition of Emmanuel Sanders) … Sam Darnold looked awful Monday night, but that was not a surprise with Bill Belichick on the other side. Maybe next time, though, don’t talk about being “unstoppable” after one game with the No. 1 defense on your schedule.

Although I still expect Johnson to be the lead back whenever he’s recovered from his ankle injury, there’s no way the Cardinals are going to put Edmonds in mothballs after what he did against the G-Men on Sunday. Edmonds was already flashing his potential, scoring in Weeks 5 and 6, and I expect him to be a significant part of the game plan each week. I’m staying conservative with my Edmonds ranking, but there’s some real upside there.

I haven’t given up on Montgomery as a talent, but I can no longer justify carrying him in the RB2 area. The Bears’ offense has been highly dysfunctional this year, and the fact that the bye week changed nothing is a major concern. I’d drop Cohen as well except that I already had him pretty low, and he did have nine receptions (for 19 yards!?!?) against the Saints.

Kerryon Johnson (knee) has rushed for less than 50 yards in five of six games this season, and now he’s dealing with a knee injury. There’s been no meaningful update — Matt Patricia said that Johnson told him he was “fine” — but regardless of health, Johnson is being moved down

Update: Johnson was placed on IR and is one of Detroit’s two players with eligibility to return this year. Ty Johnson has RB4 value for now with matchup-play value. J.D. McKissic has a hint of appeal in deep PPR leagues.

Saquon Barkley is officially back and, as such, is back in my top five … Latavius Murray‘s big game against the Bears might serve as a reminder to the Saints that he’s actually a decent back. They signed him to fill the Mark Ingram role, so perhaps they’ll start distributing carries more evenly between him and Alvin Kamara moving forward … Speaking of Ingram, he’s slowed considerably after a hot start and is being moved into RB2 territory for now … Austin Ekeler is better than Melvin Gordon in this version of the Chargers’ offense; as such I’m moving Ekeler up and Gordon down … Joe Mixon has 12 yards on 18 carries in the last two weeks. That isn’t a typo. The Bengals are just awful, and they’re dragging Mixon down with them … It looks like Frank Gore is still operating ahead of Devin Singletary in Buffalo. I’ve moved both into the flex area … I added Mark Walton to the rankings after he got more work than Kenyan Drake. It also wouldn’t be surprising to see the Dolphins deal Drake before the trade deadline.

Despite the Bolts’ complete inability to run the ball, Allen has pretty much disappeared over the past month. Williams has been decent, but it certainly appears that the passing game currently flows through Hunter Henry and Austin Ekeler. Unless the Chargers start getting the ball to their receivers with more consistency I’m viewing Allen as a WR2 and Williams as a WR3 in the weeks ahead.

Lost in the ineptitude of Denver’s offense has been the play of Courtland Sutton. He has topped 75 yards receiving in five of seven games this season and could be in line for more action if Emmanuel Sanders is traded. Sutton is close to joining my top 20.

Update: Sanders was dealt to the 49ers, which helps make DaeSean Hamilton a borderline fantasy option. There is just enough volume to be found outside of Sutton to give the second-year slot receiver a peak if depth is a concern. His ranking will be addressed in the next update.

Will Fuller (hamstring) suffered what is believed to be a major hamstring injury that will sideline him for multiple games. That’s been the story of Fuller’s career, unfortunately, and you can bet he won’t be rushed back. Fuller’s absence should mean more looks for Kenny Stills and Keke Coutee.

Mohamed Sanu was acquired in exchange for a second-round pick, which is a steep price for 30-year-old receiver with a history of being a role player. The Patriots tried to land him in a trade during the draft, but Atlanta wasn’t interested. The veteran receiver gives Tom Brady another weapon, but one of the possession variety. Where Sanu’s game will be most felt is in the running game. He’s among the best blockers in the league at his position. Sanu was Atlanta’s chief slot receiver, so it will be interesting to see where New England opts to play him. In this systems, Sanu is big enough to be a hybrid tight end in the Gronk flex role.

Updated for Emmanuel Sanders trade: After landing Sanders from Denver, San Francisco should immediately make him the focus after tight end George Kittle. The learning curve for a Kyle Shanahan offense is known to be steep, although it could be much faster for Sanders after playing half a season under Rich Scangarello (2018 SF QBs coach) and having prior experience in offense that employ elements of the West Coast offense. Building chemistry with Jimmy Garoppolo is the primary concern, and San Fran’s injuries at offensive tackle are a close second. Deebo Samuel (groin), when healthy, is the only San Fran receiver worthy of a roster spot. Rankings changes will be reflected in the next update.

Tyrell Williams (foot) falls into the 40s with plantar fasciitis that Jon Gruden said doesn’t seem to be getting better … Golden Tate is a nice fit for a young QB and has always been good after the catch. I’m moving him up as the top Giants receiver to own and moving Sterling Shepard (concussion) down, especially after missing a second game with a concussion … Marvin Jones had a huge game after being mostly quiet over the first month-plus. I’m moving him up into flex range as Detroit’s offense seems to be getting further and further away from the run (yet again) … Chicago didn’t seem to fix much (anything?) during the bye, but I did see more of Anthony Miller … Much like I did with Michael Thomas following the Brees injury, I’m keeping Tyreek Hill as a top WR. He’s the type of player they’ll find ways to get him the ball. All the other KC receivers go down.

There aren’t a lot of options outside for the Raiders, but Waller is having a strong season and should continue to be the focal point of the passing game. I’m moving him into the top five, and he’s actually outperformed most of the names above him to this point. Rookie Foster Moreau is also being added to the rankings. He’s caught nine of his 10 targeted passes the last three games and scored twice.

I feel the same way about Travis Kelce that I do about Tyreek Hill: he’s gonna get his no matter who is under center … Evan Engram‘s first three games: 23 receptions, 277 yards, 2 TDs. Engram’s last three games: 11 receptions, 102 yards, 0 TDs. With Tate and Barkley back, I’m dropping Engram a bit … I’m adding Jacob Hollister to the rankings as it appears he’s stepping into Will Dissly’s pass-catching role and not Luke Willson. 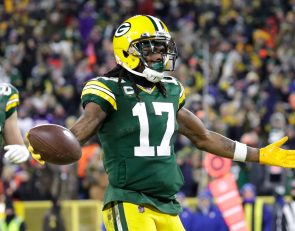