NOTE: These player rankings track a player’s value for the remainder of the season and are intended to be used as a tool, not necessarily a definitive guide to player valuation. The scoring system is performance PPR.

There is no exact science behind season-long rankings, considering all of the variables and situational uncertainties at work. Defensive teams have been added but will not have analysis.

It’s hard not to be impressed by what Brissett has done in the wake of Andrew Luck’s retirement, but after moving Brissett into the top 10 last week, I’m reconsidering and moving back to QB2 status. He’s thrown for less than 205 yards four times in seven games, and his value is overly dependent on touchdowns. I need to see more consistency from Brissett to consider him a legit fantasy QB1.

Yes, Ron Rivera announced that Allen will start once again in Week 9, but whatever slim chance there was that Newton would remain on the bench came to a halt during that bloodbath in San Francisco. I’m guessing that Newton will be back sooner than later. For now, that means flipping him and Allen, but Newton will jump higher once he officially returns.

I originally thought we wouldn’t see Patrick Mahomes until Week 13. Now, I’d be surprised if he’s not back for Week 10, maybe sooner … Drew Brees returned from his thumb injury so he jumps to low-end QB1 territory and Teddy Bridgewater slides down … The loss of Kerryon Johnson is going to mean more throwing from Matthew Stafford, who is quietly playing really well this year … Take a quick look at the upcoming schedule for Kyler Murray. That’s imposing for someone who already has failed to throw for a TD in four of his last five games … Joe Flacco won’t play in Week 9 with a neck injury, and it sounds as though it could be something that keeps the veteran out for a while … I know the Jags paid Nick Foles a ton of money, but you can’t bench Gardner Minshew, can you?

With Chase Edmonds (hamstring) joining David Johnson (ankle) on the sidelines, the Cardinals traded for Kenyan Drake on Monday. In the short term, Drake could step right in as the primary back. Long term, it’s less clear. Edmonds is expected to miss a few weeks with a hamstring injury, even though the team hasn’t ruled him out for Thursday, and there’s no clear timeline with Johnson. For now I’m dropping Johnson a little, Edmonds a bit more and keeping Drake as an RB4.

Last Monday, Matt Patricia said Kerryon Johnson (knee) was “fine.” A few days later he was placed on IR, which means at most he’d return to play two games, and it seems unlikely the team would wait that long to bring someone back. Journeyman Tra Carson got the most carries in Week 8, and Ty Johnson saw action as well. For now, I’m classifying both as RB5s until I see more, though my expectation is that the Lions will simply throw a lot more or attempt to trade for someone.

San Francisco’s running game is superb. Ever since he returned, Tevin Coleman has been the focal point ahead of Matt Breida, who hurt his ankle Sunday, and I’ve decided to essentially swap the two and then bump up Coleman.

Derrius Guice returned to practice and could be activated for Week 11. If you have room to stash him on your bench, do so … Tampa Bay’s running game just isn’t very good. I prefer Ronald Jones to Peyton Barber, but I’m dropping both of them … Aaron Jones is developing into an elite-level dual threat and earned a bump into my top five … David Montgomery carrying the ball 27 times is a step in the right direction, so I’m moving him back into the 20s. Now how about involving him in the passing game … It sounds like Miles Sanders‘ shoulder injury is minor. That’s good news as he looked great against the Bills … James Conner departed late with a shoulder problem of his own that has been called an AC joint injury. With no word on the severity of it, there’s no change to Conner’s standing.

In hindsight, I probably should’ve dropped Adams further initially, but it always seemed like he was just about to return. And now, it looks like he really is just about to return after being a game-time decision Sunday night. The development of players around him shouldn’t hurt Adams’ production, either. He’ll immediately step back in as Rodgers’ top target, and maybe teams won’t be able to commit as much attention to him going forward.

In his second game as the starter, Ryan Tannehill threw most of his passes to tight ends and underneath receiver Adam Humphries, leaving Corey Davis and A.J. Brown to combine for 20 yards on four catches. I’m keeping all three Titans wideouts where they are as I wait for more clarity for what the passing game will look like under Tannehill.

Following the Emmanuel Sanders trade, I’m moving Courtland Sutton up a bit and keeping Sanders as a WR4. Even though I think that Sanders is the top 49ers receiver to own, that offense is built around the running game.

Brandin Cooks is having a difficult season. He’ll get two weeks to recover from his latest concussion, but there have to be some concerns going forward … Tyrell Williams returned to the field and scored yet another TD. As long as he’s healthy, Williams is a viable WR3 … It doesn’t sound like Dede Westbrook will miss much time, if any, but if he does Chris Conley has a little juice … If the Redskins can get competent QB play I’ll consider moving up Terry McLaurin again. Until then, though, I can’t put him higher than WR3 status … No running game means more looks for Danny Amendola, who has some real appeal in PPR leagues … Christian Kirk returned from injury and seemed to be Murray’s top target. If that keeps up it’ll be time to move him ahead of Larry Fitzgerald … Josh Gordon is on IR and expected to be released. If/when he signs with a new team I’ll adjust his value accordingly.

Over the last three games, Zach Ertz has eight receptions, 112 yards and no touchdowns, while Dallas Goedert has 11 catches, 139 yards and two scores. There’s no doubt in my mind that Ertz is still the main man in Philly, but Goedert is becoming a bigger part of the offense and taking advantage of the coverage Ertz draws.

With Delanie Walker bothered by an ankle injury the past two weeks, Jonnu Smith has 142 receiving yards and a TD. I’m sure the Titans would love to Smith emerge given Walker’s age.

There was an official Tyler Eifert sighting in London as he caught six passes for 74 yards. While there’s obvious injury risk, things could get interesting if Eifert is traded … Greg Olsen seems to have zero chemistry with Kyle Allen … With limited talent outside, I could see Denver getting Noah Fant more involved … Darren Fells has five touchdowns this season, and minus Will Fuller there’s no clear-cut No. 2 option in the Texans’ passing game. 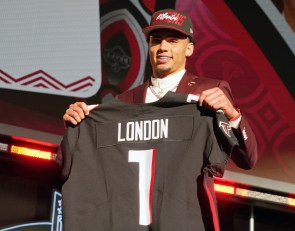