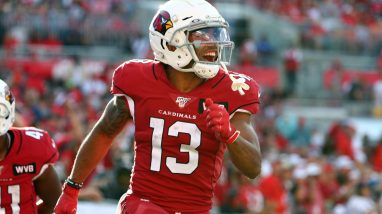 Devonta Freeman – This is the only injury likely to create new opportunities. The Falcons already placed Ito Smith on injured reserve last week and next up means Brian Hill. He ran for 61 yards on 20 carries mostly all after Freeman left by halftime. Hill also caught a ten-yard pass. Hill already has some value as the new No. 2 for the Falcons and will be the primary if Freeman misses any time. Next week, the Falcons play the Panthers that just let Aaron Jones score three touchdowns. At this point in the season, Hill is a worthy addition if you have the room.

RB J.D. McKissic – Ty Johnson left with a concussion so McKissic (10-36) and Paul Perkins (7-9) filled in. McKissic also caught six passes for 19 yards as the busiest receiver. He worth adding to a roster if there are reception points and the upcoming schedule (DAL, @WAS, CHI, @MIN) will need to use a running back as a receiver. That was with Jeff Driskell as the quarterback but Matt Stafford uses him a well.

TE Mark Andrews – Big game with six catches for 53 yards and two touchdowns. The notable part is that he’s only topped 50 yards in one other game since Week 2. He gained 99 yards on six catches in Week 6. Against the same Bengals team in their first meeting. They can’t always be the Bengals each week, but when they are, Andrews comes to life.

RB Joe Mixon – Okay, so he hasn’t rushed in a touchdown this year, but at least Mixon just turned in his first 100-yard rushing effort of the year. He ran for 114 yards on 30 carries and added 37 yards on two catches in the loss to the Ravens.

QB Ryan Finley – The rookie debuted with only 167 yards and one touchdown with one interception versus the Ravens which were not the best choice for a first game. Short of a catastrophic situation for your fantasy team, doesn’t look like he needs to be picked up. There is even game film on his this week.

Saints backfield – Sunday was a trash game for the Saints who never showed up. So it is hard to draw too many conclusions from what happened in the loss to the Falcons. Alvin Kamara returned from his ankle injury but only gained 24 yards on four carries. Latavius Murray ran five times for 12 yards so the Saints equally mixed the pair for at least this week. Kamara still caught eight of his targets while Murray only drew two passes. But the situation is more reminiscent of how the Saints used to mix Kamara and Mark Ingram.

WR Darius Slayton –  He only caught one pass for six yards in the Week 9 loss to the Cowboys but the fifth-round rookie just turned in his first game over the century mark when he caught ten passes for 121 yards and two scores on the Jets. He has a bye this week but his fantasy playoff schedule for Weeks 14 to 16 are @PHI, MIA, and @WAS.

RB Saquon Barkley – There are missing offensive linemen and a rookie quarterback, but that still doesn’t completely explain how one of the most talented running backs on the planet just rushed for a net of one yard on 13 carries in the loss to the Jets. Barkley still caught five passes for 30 yards but the first pick in most fantasy drafts was hoped to offer more than 31 yards. Barkley was reported to have gone to the x-ray room after the game but no word as to why.

Cardinals backfield – The return of David Johnson did not change much. He only ran for two yards on five carries and caught one 8-yard pass. Kenyan Drake rushed ten times for 35 yards and caught six passes for a net six-yard gain. And that is without Chase Edmonds eventually mixed back in. For now, the backfield is split and Drake is getting the bigger share.

WR Andy Isabella – The Cardinals rookie is becoming a common deep threat lately with a 55-yard catch this week and an 88-yard reception in Week 10. His 78 total yards against the Buccaneers was second highest for the receivers.

RB Ronald Jones – He’s recently been given over ten carries per game but he had never caught more than two passes. Against the Cardinals, Jones ran for 29 yards and a score on 11 carries and added eight catches for 77 yards. The Bucs had not used running backs much as receivers, so it is worth noting since Jones’s fantasy value would be much greater if he had more than two receptions per game.

RB Damien Williams – Nice development for Williams. After sharing with LeSean McCoy, he was allowed 12 carries in Week 9 and gained 125 yards with one score. On Sunday, he ran for 77 yards on 19 carries and added five catches for 32 yards. McCoy was a healthy scratch. He lost a fumble that was returned for a touchdown which works against a running back. But at least the Chiefs turned him into a workhorse this week.

WR DeVante Parker – With Preston Williams on injured reserve, Allen Hurns filled in bot only caught two passes for 32 yards on his four targets. Parker saw more work with ten targets and five receptions for 69 yards. The Fins will need to throw and look like they only trust Parker now.

WR DJ Moore – Kyle Allen is connecting better with Moore in recent weeks and his seven-catch, 101-yard effort in Week 9 was followed up with nine receptions for 120 yards at Green Bay.

RB Aaron Jones – He ran for 93 yards on 13 carries and had no receptions. But he scored three touchdowns, giving him a total of 14 scores on the year. He’s scored in seven of his ten games and yet hasn’t rushed the ball more than 13 times in the last five weeks.

Christian Kirk  –  The second-year receiver hadn’t scored a touchdown this year and was mostly held to moderate production each week while his rookie quarterback went through his learning curve.  Facing the Buccaneers in Tampa Bay was a great place for a career-best game. Kirk caught six passes for 138 yards and scored three touchdowns. It probably won’t be that easy next week in San Francisco. But he led the position for Week 10.