Is being the son of Randy Moss good enough to get a ticket to the NFL?

No. Not by itself.

Moss moved around in high school but was still courted by many of the best colleges. He’s shorter, thicker and far shorter than his father which is why he’s been a tight end. He ended up at North Carolina State.

Moss only played for one season with the Tar Heels before electing to transfer out to LSU. By NCAA transfer rules, he sat out in 2017. Moss was eligible to play in 2018, but suffered a foot injury and received a medical redshirt. His only college season of any note came as a redshirt junior in 2019 when he ended with 47 catches for 570 yards and four touchdowns.

He did himself a giant favor by showing up in the Peach Bowl with four catches for 99 yards and a touchdown. In the National Championship game, he caught two more scores that allowed Joe Burrows to break the NCAA single-season record for touchdown passes. Moss had scored just once all year until the final two games.

Scoring those three touchdowns in the final two games and being the son of Randy Moss played into his decision to enter the NFL draft. Without those final scores and his claim to fatherly fame, his college stats are almost non-existent. He has some tools to be sure, but he isn’t riding a gaudy set of stats into the NFL.

Moss was unable to participate in the NFL Combine when they found a Jones Fracture in his foot during medical exams. He is expected to be over the surgery by May at the latest but it points at a bit more risk since he missed the 2018 season from a foot injury as well.

He’s sure to attract attention with a father in the NFL Hall of Fame. Moss should be drafted in the second or third round as one of the earlier selected tight ends. He will be taken much more for his blocking skills – which are considered exceptional – than for his role as a receiver.

He can end up with a solid career in the NFL as an all-around tight end that offers both blocking and receiving skills.  He lacks the burst or speed that many receiving tight ends possess, let alone his father. He’s likely to be drafted in bigger leagues on a whim as a “you never really know” kind of pick. But tight ends almost never produce many fantasy points as a rookie and Moss doesn’t project as likely to be more than average as a receiver in the NFL.

Moss can be a big benefit to the right team thanks to his blocking and overall competitiveness. But his value will be far higher in NFL terms than in fantasy terms. 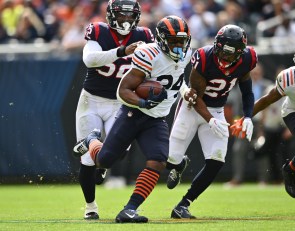