Tee Higgins originally committed to play at Tennessee in his home state but opted later to play for Clemson – not a bad trade-off. The Tigers employ a very diverse offensive attack, and Higgins contributed even as a freshman. As a sophomore, Higgins took over as the primary receiver from Hunter Renfrow and ended with a team-high 59 catches for 936 yards and 12 touchdowns while playing with next year’s hot rookie quarterback Trevor Lawrence on the No. 1 ranked team in the nation.

Paired again with Lawrence, 2019 saw him turn in 1167 yards on 59 catches for a gaudy 19.8 yards per catch along with 14 touchdowns. The Tigers had 21 players catch a pass last season – Higgins’s workload and production far exceeded any other receiver over the last two years. And Clemson went to the National Championship both seasons, winning for 2018.

Higgins didn’t participate in any drills at the NFL Combine because he had tweaked his hamstring a few weeks prior.  He was later timed at 4.54 seconds in the 40-yard dash at the Clemson Pro Day.

Higgins comes from perhaps the best offense in the NCAA but one that presented a complicated, wide-open attack that employed everyone in the offense. There were 33 players for Clemson that touched the ball last year. Catching 59 passes was very good for that offense.

There is no doubt that Higgins benefitted from playing for the powerful Tiger’s offense that was so diverse that it allowed a vertical receiver to excel since there were so many potential receivers on any given play. Of his 37 games, only nine contained more than four catches.

Higgins is an outstanding receiver downfield. He’s tall, has a huge catch radiance and will come down with the ball. But he’s not experienced as a true No. 1 receiver that can run all routes and excel with a possession role. That hasn’t been Higgins. He projects to offer a valuable No. 2 role for an NFL pass offense, one that can stretch the field and make big catches down the field. He has great body control and shouldn’t have any problem keeping both feet inbounds.

He is unlikely to turn in a rookie season as a No. 1 receiver and maybe won’t ever be one. But – in a wide-open offense with an elite quarterback, he can do a lot of damage just as he did at the highest level in college. So long as he ends up with a Top-Ten passing offense, he will offer fantasy value even as a rookie. If not, he’ll likely provide inconsistent production in his first year. 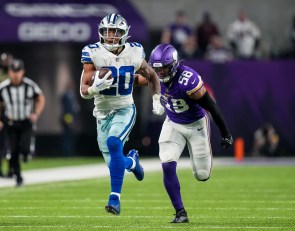