The 2019 draft class already provided a number of productive fantasy football rookies last year – A.J. Brown, Terry McLaurin, Deebo Samuel, Darius Slayton, Diontae Johnson, and D.K. Metcalf all finished in the Top-40 among NFL wide receivers. While that is impressive enough, there are still more wideouts that seek to take their own step up to being a weekly fantasy starter.

Marquise Brown (Baltimore Ravens) – The first wideout drafted in 2019 turned in monster games in both Week 1 (4-147, 2 touchdowns) and again in the surprise playoff loss to the Titans (7-126). But he did little in almost all other weeks thanks to the Ravens record-setting number of rushes and he was still recovering from foot surgery. Brown gained 23 pounds in the offseason while reportedly still keeping his 4.3/40-time speed.

N’Keal Harry (New England Patriots) – Along with Brown, Harry was the only other first-round wide receiver selection in 2019. The 6-2, 225-pound Arizona State star was limited to only 12 catches as a rookie while battling hip and ankle injuries that forced him to miss nine games and underperform in all others. He never had a chance to sync with Tom Brady when the rookie finally started playing in Week 11. This is a chance for Harry to get his career back on track with a new quarterback.

Mecole Hardman (Kansas City Chiefs) – Playing in the all-world passing offense of the Chiefs is reason enough to be excited about with Hardman could do in his second season. The former second-round pick ended his rookie season with 26 catches for 449 yards and six touchdowns though he did most of his damage early in the season while Tyreek Hill was injured. Hardman drew several comparisons to Hill including a 4.33/40-time speed. He currently sits at No. 3 on the depth chart with Sammy Watkins no lock to keep his starting role.

JJ Arcega-Whiteside (Philadelphia Eagles) – While he was limited to only ten receptions for 169 yards and one touchdown as a rookie, the needle is pointing up for the ex-Stanford star. The depth chart for the Eagles also contains DeSean Jackson, Alson Jeffery, and Jalen Reagor, but Arcega-Whiteside has received rave reviews this summer for the progress that he’s made since last season and that’s raised both the confidence and expectations for the second-year player.

Parris Campbell (Indianapolis Colts) – The ex-Ohio State playmaker was drafted thanks to a blazing 4.31/40-time and a productive senior season. His rookie season was a washout with only 18 receptions for 127 yards thanks to a litany of injuries to include breaking bones in both his hand and foot, and also suffering from a nagging hamstring strain. He’s another second-year receiver that has made major strides in his development since his lost rookie campaign. He’ll be mostly in the slot with a far better quarterback in Indy this year.

The 2019 draft class already proved a delightful surprise with numerous breakout seasons last year. Their impact is certain to grow even more with the optimism and expectations for the above receivers. 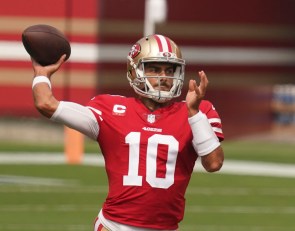