Although it unofficially began last week thanks to COVID-19, the Bye-week season begins officially this week with only Green Bay and Detroit players unavailable. Unlike last week when there were a slew of marquee matchups, this week has a lot of games where teams are favored by big points and some teams are operating under the cloud of the pandemic, which could hurt their chances of maintaining a competitive balance. For the NFL betting aspect, those are good things.

Coming off his best week as a Buccaneer, Tom Brady is being praised as the G.O.A.T again. But, his top two receivers are banged up and Chicago is one of the league’s best pass defenses. Take Chicago on the money line for a home-upset pick.

The Over/Under is high at 54.5 (-110 for both), but the Falcons are just a 1.5 point favorite (-110 both ways) because of their early struggles. Julio Jones and Calvin Ridley are both injured, but if either of them plays, the Falcons have the firepower to handle a suspect Carolina defense. Take Atlanta and lay the points.

Washington made a change at quarterback, which typically infuses an offense with a new look and different attitude. But, the Rams are too strong on both sides of the ball. The Over/Under is just 44.5 (-110 for both). If WFT can account for 17 points, the Rams should take care of the rest. Take the Over.

For a team that is 0-4, the Texans are a 6.5-point favorite (-110 for both teams) against the Jaguars. That is a tough bet to make because Houston, for all its fault and a brutal schedule over the first four games. They fired their head coach/G.M. after last week’s loss and are looking to show the world that they’re not a bottom feeder. Take Houston and lay the points.

There is no way I’m ever going to risk my money betting on the Jets. They are the worst franchise in the NFL and its not close. Arizona is favored by 7 points (-110 on both sides). Bettors would like to see it a point less, but I’d be willing to give 10 points to the hapless Jets. Take Arizona and lay the points.

The Eagles have been a train wreck all year, so you don’t want them on the money line and probably not against the spread. But, in the Battle of Pennsylvania, there are going to be points scored, which makes the Over/Under of 44.5 (-110 on both) a seeming referendum on Pittsburgh’s defense. The Eagles have the horses to score 20 points. That’s all you need if you take the Over.

Both the point spread, which is hovering between 12 and 13 points and Over/Under of 55.5 points (-110 for both) are too high, but both could be easily achieved. I would steer away this game, but, to choose one option, if the Raiders score 17 points, the Chiefs will have to hit 40 to make the Over. Take the Under.

Buffalo (Off) at Tennessee (Off)

Bet online, legally in CO, IN, NJ and WV

The Ravens have all the weapons they need to throttle the Bengals and rookie Joe Burrow with their defense. Baltimore is favored by 13 points (-110 for both) and this has the making of game that the Ravens run over the Bengals, force the ball into Burrows hands and attack. Take the Ravens and lay the points.

The 49ers are 9-point favorite (-110 for both) on the expectation that QB Jimmy Garoppolo will be back and perhaps RB Raheem Mostert as well. That would help. However, the Niners are still hamstrung on defense with injuries, making giving away nine points a little too rich to endorse. Take the Dolphins and the points and hope Ryan Fitzpatrick is playing for his career…because he probably is.

The Cowboys defense has been a hot mess most of the season, but the Giants without RB Saquon Barkley could be the cure to a lot of evils. I’m done making prop bets against QB Dak Prescott. If he throws for 400 yards again, Dallas wins by 24, not loses. The Cowboys are 9.5-point favorites (-115 for Dallas, -105 for the Giants). Take the Cowboys and lay the points.

The Colts are 1.5-point favorites on the road at Cleveland. It seems like everyone is waiting for the other shoe to drop. Philip Rivers hasn’t had to put the Colts on his back yet this season. He’s pedestrian at this point in his career. The Browns will bring it to him – an early lead he has to overcome. Take the Browns on the money line.

Denver (Off) at New England (Off)

A new positive Covid test for the Patriots and the availability of QB Cam Newton has this off the board on many sports books. But, the consensus is that the Patriots will be 8-point favorites (-110 for both). Bill Belichick made QB Patrick Mahomes look mortal without Newton. Against Denver? Who cares who there quarterback is. Take your beating like men. Take New England and lay the eight points.

The Vikings new-look defense held on to win a game and their opponent fired their coach. Pete Carroll’s job isn’t on the line if he loses. He won’t. Even if Minnesota’s defense is at full strength, I’d lay the 7-point spread (-110 for both). It’s not. Take the Seattle and lay the points.

Saints at home on a Monday night. Statement game. The point spread is Saints-n-8 (-110 on both). Take the Saints (Michael Thomas or not) and lay eight points.

Get action on any of these games by placing a legal online sports bet at BetMGM in CO, IN, NJ and WV. Bet now! 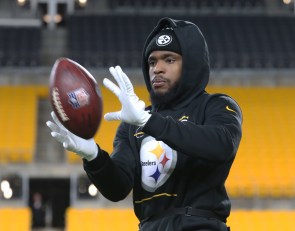