Week 9 is a week of many games that don’t have a lot of swagger, but the Seahawks-Bills game will be worth the price of admission and the rematch of the Saints and Buccaneers will be a potential Instant Classic. The weeks ends with the Patriots at the Jets, which will be a FRO game (For Relatives Only).

The Packers are stinging from a home loss to Minnesota and the 49ers are getting ravaged by injury, especially on offense. The Over/Under is 48.5 points (-110 for both). The Packers are going to win this game, but San Francisco still has enough horses defensively to make a stand. Take the Under.

Historically, West Coast teams playing the early Sunday window struggle.  That has me thinking Buffalo has a chance. However, with questions surrounding the Seahawks run game and Seattle’s iffy pass defense, this could turn into a shootout from the get-go if Wilson gets Seattle up early. The Over/Under is 54.5 points (-115 Over, -106 Under). This one could go back and forth. Take the Over.

Atlanta has too much offensive talent not to be in games. But, the Falcons record of blowing leads speaks for itself. Like the ex-girlfriend you can’t shake, they keep you in their spell. The Falcons are a 4-point favorite (-110 for both Atlanta and Denver). At some point, Atlanta will lead by 10 or more. But, will they hold it? They tend not to, but, begrudgingly, take Atlanta and the lay the four points.

Two teams that, if they have their way, run the ball. Their defenses are both good enough to hold an opponent. The Over/Under is 46.5 (-110 for both). While the team are capable of lighting up the scoreboard, this one doesn’t have the look of an up-and-down-the-field type of game. Take the Under.

The Ravens are coming off a tough loss to the Steelers despite dominating the stat sheet. Somebody has to pay for that and it’s going to be the Colts. The point spread is Baltimore as a 2.5-point favorite (-110 for the Ravens and Colts). Take the Ravens and lay the points.

Detroit (Off) at Minnesota (Off)

This game has been taken off the board since Matthew Stafford was placed on the Reserve/COVID list. If it comes back, take Minnesota and lay the point spread because the Lions depend on Stafford too much to change horses, especially without Kenny Golladay.

Whenever you have the Chiefs on the schedule, you can count on the Over/Under being high. It is this week at 52.5 (-110 for both the Over and Under). With Christian McCaffrey back, the Panthers will do their part and the Chiefs will respond in kind. Take the Over.

The Texans have been one of the most disappointing teams in the league this season, but they still have the firepower to do damage. Coming off their bye week and less than a touchdown favorite (6.5 points at -110 for both teams), they have something to prove to try to salvage their season.Take the Texans and lay the points.

When two awful NFC East teams play one another, anything is possible. Washington is a 2.5 point favorite (-110 for both). Personally, I have tended to AVOID betting on games when these dregs meet, but, if you have to bet something, take the Giants on the Money Line because it provides the best return.

The Chargers are a 1-point favorite, which is virtually a push if you think they’re going to win. Nobody finds ways to lose like the Chargers and that trend will continue. Take the Raiders on the Money Line.

The Cowboys have the weapons on offense, but no quarterback to get the job done. It’s hard to watch Cowboys games because they are so ugly. The point spread is a massive 13.5 points (-110 for both teams) and is the biggest home dog the Cowboys have been in decades. But, it’s there for a reason. Take the Steelers and lay the points.

The Cardinals are coming off their bye week and ready to stay in the middle of the playoff chase. Miami’s defense isn’t bad, but with a 4-point spread (-110 for both teams), the battle of young QBs will be won by Kyler Murray. Take the Cardinals and lay the points.

When the teams met in Week 1, Tom Brady looked old and off his game. A lot has changed since then. Both QBs can work the ball down the field and get points, whether field goals or touchdowns. I projected an Over/Under of about 55 points, which makes the 51.5 point O/U (-106 for the Over, -115 for the Under), which gives the clear impression that game won’t hit the point. Two Hall of Famers in prime time tells me different. Take the Over and watch the shootout.

I’ve had one simple rule all season I haven’t wavered from – don’t invest anything in the Jets. I don’t care how many points you have to give away, do it. The point spread has New England as a 7-point favorite (-110 for both teams). I would lay 10 points. Take New England and lay the points and see if you can get a prop bet for more.

Get action on any of these games by placing a legal online sports bet at BetMGM in CO, IN, NJ, TN and WV. Bet now! 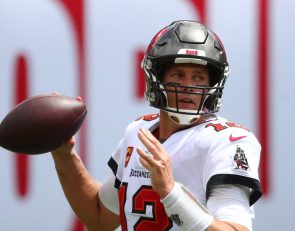