I couldn’t find a single player last week that deserved more than a lukewarm endorsement, so I settled on Seattle Seahawks TE Greg Olsen. Right position on the team, wrong player … Jacob Hollister, not Olsen, was the primary beneficiary of the matchup and situation, marking the first time all season in this space that my recommendations were wrong in consecutive weeks.

Rather than play it safe to avoid making it a hat trick of consecutively terrible calls, I’m going to place my bet on game flow and situational football taking over.

When the Browns lost Odell Beckham Jr. (knee) for the season in Week 7, Higgins stepped in cold and picked up the slack. He finished with six targets, as many receptions, and 110 yards. OBJ wasn’t heavily involved in the offense to begin with, and this is a run-heavy system, so we’re not looking at a massive volume of work to replace. That must be recognized off the bat — and it was, in part, on display in Week 8 when Higgins had the lineup spot all to himself. He saw three targets vs. Las Vegas, landing one for 14 yards. It’s difficult to matter much when your team passes 25 times.

In Week 9, the Browns were on bye and had the time make the necessary adjustments that could benefit Higgins. Another factor working in his favor is the expected return of running back Nick Chubb, because his explosive nature keeps defenses honest, whereas Kareem Hunt is more of a grinding style of player who doesn’t necessarily scare defensive coordinators with the prospects of ripping off a massive run each time he touches the ball.

Tight end Austin Hooper also is poised to return after missing action due to an appendectomy, and his position faces a bright matchup outlook vs. the Texans. That could potentially work against Higgins’ volume, but it also presents yet another outlet for the defense to focus on.

Higgins, who scored in consecutive games as a role player prior to OBJ going down, has demonstrated chemistry with quarterback Baker Mayfield in the past. The two hooked up on four touchdowns in 2018, and Higgins amounted to somewhat of a safety blanket for the then-rookie passer during a season in which Jarvis Landry was the top receiver and Beckham wasn’t on the roster. Sound familiar?

Houston has given up the seventh-highest average of PPR points to the position on the season, and in the last five weeks, the number jumps from 41.8 per game to 49.5, which is 30 percent more than the league average. Thirteen receivers in eight contests have posted 10 or more points in reception-rewarding scoring systems, and there have been six individual efforts with at least 75 yards. Ten receivers have produced five or more grabs against this unit.

My biggest concern about this situation is the offense could lean into the positive matchup for the running backs heavier than expected and we see a similar situation as in Week 8, when low volume was a fantasy death knell for Cleveland receivers. The reason why I feel this is mitigated vs. Houston is the Texans have the firepower to keep Cleveland in need of scoring points in a matchup that favors Houston’s aerial game.

In a week where gamers are without Julio Jones, Calvin Ridley, Amari Cooper, CeeDee Lamb, Tyreek Hill and Jamison Crowder, there has to be a willingness to take a chance on an underutilized player with a great matchup and extenuating factors working in his favor. Part of taking that gamble comes with the acceptance that some weeks you’re rolling the dice on modest output and not a game-breaking performance. 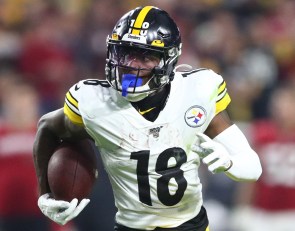 A tiered view of this week’s positional fantasy football rankings.

How does our staff see Week 12’s full slate of NFL games playing out as the season enters crunch time?

Predicting the outcome of all 14 games and projecting the fantasy stats for all NFL players.

It’s time to find those IDP gems on the fantasy football waiver wire in Week 12.

Looking at the fantasy football options who are going up in value — and those who are crashing.

A look at buy-low and sell-high targets for league with a late-season trade deadline.

Evaluating the future values of all notable players in the 2020 fantasy football season.