It ends up that the Steelers are mortal, and all it took was the worst team that they had yet faced to visit. Injuries were very low last week and that’s not uncommon. They say everybody who is going to get hurt, already has. And by this point of the season, everyone is hurt on some level and just dealing with it.

COVID-19 is a bigger deal each week and has proven to be a problem since it’s hard to know if a person is on the lost with a positive test or were just in contact with someone who had. Hard to know when they are coming off the list and what shape they are in because it is not a part of the official injury report.

Fantasy playoffs have started in large contests and will happen in fantasy leagues this week and next. We’ve made it through 13 weeks without missing any games, and only a few fantasy-relevant players were impacted. Let’s hope it all lasts just three more weeks.

Six things to think about for Week 14: 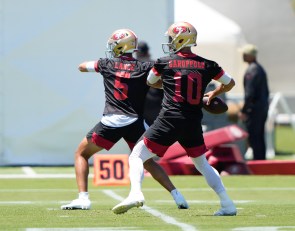 A four-pack of fantasy football best-ball buys for the upcoming week.

Does a trio of new QBs offer any hope?

Several second-year players are on the cusp of something special.