Lineup notes: WR Cole Beasley (knee) has been ruled out. WR John Brown (illness) is fresh off the Reserve/COVID-19 list and will play.

Lineup notes: TE Kyle Rudolph’s (foot) season ends on Injured Reserve with a foot injury. RB Dalvin Cook (personal) will also miss the finale due to a personal matter. PK Dan Bailey (back) will kick through a questionable designation. RB Alexander Mattison (concussion) was a full-go Friday and should see a ton of work in place of Cook.

Lineup notes: WR Kenny Golladay (hip) will end his season in a familiar spot on the inactive list. QB Matthew Stafford (thumb, rib) will gut it out one more week.

Lineup notes: RB Frank Gore‘s season ends on Injured Reserve with a lung contusion. RB Ty Johnson (hip) practiced fully Friday and should serve as the lead back after RB La’Mical Perine (illness) was put on the Reserve/COVID-19 list. PK Sam Ficken was released and replaced by PK Chase McLaughlin.

Lineup notes: WR Golden Tate (calf) didn’t practice all week, and he’s inactive. TE Evan Engram (calf) and WR Sterling Shepard (rib) were limited all week, but they, along with QB Daniel Jones (hamstring, ankle), are off the report.

Lineup notes: WR Allen Lazard (abdomen, wrist) was limited Friday, and RB Jamaal Williams (quadriceps) was a full-go. Both are off the report.

Lineup notes: QB Philip Rivers (toe) practiced Friday and will play in what could be his final NFL game. WR Michael Pittman (concussion) will be out there after clearing the concussion protocol.

Lineup notes: RB Clyde Edwards-Helaire (ankle), WR Tyreek Hill (hamstring) and WR Sammy Watkins (calf) will all sit out this week. RB Le’Veon Bell (knee) was limited all week, and he will play through a questionable tag.

Lineup notes: RB Darrell Henderson (ankle) landed on IR with an ankle injury. QB Jared Goff (thumb) is out this week after thumb surgery. RB Cam Akers (ankle) will play through a questionable tag. RB Malcolm Brown (shoulder) was limited earlier in the week, but he doesn’t have an injury designation.

Lineup notes: RB Carlos Hyde (illness) has been ruled out. TE Greg Olsen (foot) is questionable. RB Chris Carson (foot) was limited in practice, as usual, but he’s off the report.

Lineup notes: WR Michael Thomas (ankle) remains on IR. RB Alvin Kamara (illness) was placed on the Reserve/COVID-19 list and will be out. RB Latavius Murray (quadriceps) got a full practice in Friday and is off the report. However, he was put on the COVID list as a close contact, and he will be joined by third-string RB Dwayne Washington. RB Ty Montgomery is expected to start.

Lineup notes: RB Mike Davis (ankle) and RB Christian McCaffrey (thigh) are both doubtful after neither practiced all week. WR Robby Anderson (groin) practiced fully and is off the report. 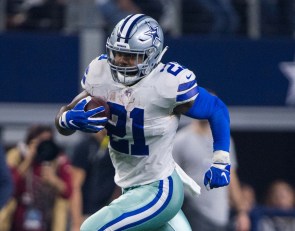