This year’s NFL free-agent class is as deep as ever, and there’s no doubt fantasy footballers will see several marquee names changing teams. In this piece, we’ll examine three unheralded players whose movement will fly under the radar in comparison to their elite counterparts.

These names are more along the lines of intriguing options than surefire fantasy targets, regardless of where they land, so we’ll revisit when all of the pieces of the puzzle fit together.

The 25-year-old impending free agent is likely to leave the Atlanta Falcons in search of another opportunity, although a return to the Dirty Birds isn’t totally out of the question. He’d have an opportunity to be the guy, in theory. Hill was cut twice early in his career and said he did some soul searching as a result, which helped lead to him receiving rave reviews entering 2020, and it showed on the field.

Some of him being buried on the depth chart can be blamed on the pedigree of the players ahead of him (Devonta Freeman, Tevin Coleman, Todd Gurley) since coming back over from a brief stint the Cincinnati Bengals, but injuries and poor play still didn’t open enough opportunities for Hill to fully take over until this past season.

Hill has been efficient in his short NFL run. He had played only seven NFL games in his first two years, and he saw just 22 utilizations come his way in 2018. The sample size is small, but Hill averaged 7.8 yards per carry that year. He followed it up with three scores on 88 touches and averaged 4.1 yards per carry in 2019 behind what was a horrendous offensive line. In 2020, Hill saw his workload increase to a personal-high 100 carries and 25 receptions. He averaged 4.7 yards rushing and 8.0 receiving, so there’s something to be found here in the right system.

Speaking purely on opportunity, the best fits include the Miami Dolphins, New York Jets, Seattle Seahawks, San Francisco 49ers, Arizona Cardinals and Atlanta. Finding a team with a consistently split backfield is the more likely scenario for Hill. There could be valuable roles found in Houston, New Orleans and Carolina.

Entering his first shot at free agency, Bourne probably outplayed himself re-signing with the 49ers after posting career highs for receptions (49) and yardage (667) in 15 appearances. He scored only twice, down from five in 2019 and four the year prior, as the Niners struggled at quarterback. San Francisco has to address its secondary and other contractual situations before paying Bourne what he’s worth on the market. Both sides have interest in exploring a renewal, and Bourne has stated his goal is to play for a contender.

In San Fran, should he return, Bourne is no better than the fourth weapon on any given play. The 49ers could opt to pay him a little more than the front office desires on a one-year pact to keep continuity in the offense after injuries derailed wide receiver Deebo Samuels and tight end George Kittle’s 2020 seasons.

A better fantasy situation is Bourne sells his services — highlighted by being clutch and displaying strong work ethic — to the highest-bidding playoff contender. On such a short list, Baltimore, Pittsburgh, Cleveland, Indianapolis, Tennessee, Las Vegas, Seattle, New Orleans and Green Bay. In the event he is lured by money or opportunity over a shot at playing late into the postseason, Detroit, Carolina, Chicago, Miami, both New York teams, and Jacksonville make ample sense for both parties.

The former Chicago Bear was a project when he entered the NFL in 2017, and one could soundly argue his first four years in the league hindered his progress. It’s tough to find consistency with three offensive coordinators in four years.

The key for Trubisky to make a difference in fantasy football is finding the right landing spot. Not only will he need the weapons around him and line to protect him, but Trubisky has to be comfortable. He played his best football in Chicago when he had nothing to lose.

Getting all of those things to line up accordingly is going to be an issue. The best place for this to happen is with the New Orleans Saints. The only other viable options are Denver and Jacksonville, and neither is even remotely close to being the same caliber setting as New Orleans.

He’s not going to immediately turn into Peyton Manning after signing in a new city. That also doesn’t mean he should be totally written off. What is needed: more consistency. Trubisky posted 25-plus fantasy points in seven of his past 16 full contests (regular season). For comparison, Russell Wilson had nine, Kyler Murray had 10, Tom Brady posted nine, and Ryan Tannehill authored six — all were top-nine fantasy quarterbacks in 2020.

Keep tabs on his travels in free agency and remain open-minded about Trubisky’s future rather than dwell on his past. 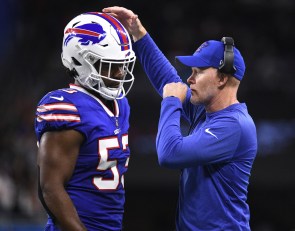