For training camp battles, there are few with more interest to fantasy fans as the rookie Javonte Williams going against the veteran Melvin Gordon. While  both running backs are expected to play, the question becomes will either enjoy a larger portion of the workload, or will they evenly swap out?

The winner (and hopefully your fantasy team) will reap the benefits of playing in a backfield that ranked around No. 10 in carries, yards, and touchdowns from their rushers. And it will be the rushing portion of their respective workloads that matters most, since the first year of OC Pat Shurmur only completed 52 passes to the position (No. 29), for 272 yards (No. 31) and only one touchdown (No. 30). All combined, this backfield ran for 1,669 yards and ten scores on 372 carries in 2020.

Their success last season came from running Gordon (215-986-9) and Phillip Lindsay (118-502-1). While Lindsay is gone, Williams is hardly just a plug-in replacement.

The Broncos upgraded their backfield by selecting Williams with their 2.03 pick, which made him the third back drafted. Williams comes in with a solid pedigree, having paired with Michael Carter at North Carolina for a very productive backfield. Williams peaked as a junior last year, rushing for 1,140 yards on 157 rushes (7.3 yards per carry) over the 11 game season. He also tacked on 25 catches for 305 yards and accounted for a total of 22 touchdowns.

Williams was a high school valedictorian, and brings an intelligence to his sizable set of physical talents. He led the NCAA in missed tackles last year, and was second in gains of 15+ yards. Williams is the prototypical size at 5-10 and 220 pounds. He’s a violent runner that is very hard to bring down. Williams offers a beast at the goal line as well, running in 19 scores last season. His pass-catching and blocking skills also improved in each of his three years.

Williams was not overworked and is fresher than most other rookie backs. While he’s not that fast (4.58 40-time), he’s the guy you want to use to beat down a defense and handle all the inside work. The ex-Tar Heel has the proverbial nose for the endzone and could have instantly slotted as a three-down back on many other teams.

The Chargers selected Gordon with their 1.15 pick in 2015, between Todd Gurley and T.J. Yeldon. In fairness, he played behind a poor offensive line for much of his  five seasons in San Diego/Los Angeles, but he only saw one season there with more than a 3.9-yard rushing average.  His fantasy value stemmed more from scoring and he’s always been good for between nine and fourteen touchdowns every year.

He only broke 1,000 rushing yards only once (2017) as it was the only time he managed to play in all 16 games. He typically has missed two to four games every season. Gordon is 6-1 and 215 pounds, so he’s slightly more lanky than the burlier Williams. Gordon also held out for a portion of 2019 hoping for a long-term contract that never happened. He returned in Week 5 and had one of his worst years.

Though he turned down a contract offer of $10 million a year with the Chargers during his holdout, he was not re-signed by them and accepted a two-year deal with Denver for $16 million that ends next February. His first season with the Broncos resulted in 215 rushes for 986 yards and nine scores, plus a career-low 32 receptions for 158 yards and one more touchdown.  They just don’t throw much to Shurmur’s backfield. Gordon only missed one game in 2020 related to a team punishment for his DUI arrest that was later dropped.

Gordon’s fantasy value has always relied heavily on his touchdown scoring and receptions.

The Broncos have made no motions toward extending Gordon’s contract, so he is slated to be a free agent next year at the age of 29. He’ll likely find even less interest in his services. And the Broncos traded up five spots to snag Williams at the start of the second round as a sign that they coveted the much-hyped rusher out of North Carolina.

Here’s the backfield breakdown in 2020 during the first season with Pat Shurmur as offensive coordinator.

Gordon received around 15 to 20 carries in games that went well for the Broncos, but rarely more than two or three receptions even as the primary back. Lindsay would turn in around six to eight rushes per week, with only the occasional catch.

So, the backfield ratio between Gordon and Lindsay was usually about 2:1 or 3:1 favoring Gordon, and Lindsay offered nearly no fantasy value other than the one week that  Gordon missed.  Shurmur was the offensive coordinator for the Vikings for Dalvin Cook’s rookie season (2017). but that was cut short after only four games. He did give Cook over 20 carries in two of his three full games before his season-ending injury.

The dilemma is that this offense hasn’t relied on a Thunder and Lightning approach under Shurmur because there is minimal passing. Both Gordon and Williams provide the bigger back “Thunder,” and both have been great at the goal line. It’s more like Williams was selected to replace Gordon who is gone next spring. And they moved up to make sure that happened.

The consensus is that Williams takes over the primary rushing role likely in  Week 1. But – what does that mean? Last year, Gordon ended as the No. 12 fantasy running back while Lindsay landed as an inconsequential No. 66. Of the total of 372 rushes, Gordon only took 215 of them. He has been a solid receiver in the past, so is it reasonable to assume that he becomes the new Lindsay and yet retains most of the receptions? That’s still going to produce some fantasy value.

And while Williams enters with plenty of pedigree and apparent talent, he is a rookie that only totaled 366 career carries in college. It’s nice that he wasn’t overused, but does that result in a lack of experience that he has to gain while a perfectly good (assuming health) Gordon is on the sideline already accomplished in all facets of the offense?

The safest bet, barring any future developments, is that Williams assumes the primary rusher role likely from the start – he was drafted for it and owns all the skills the role needs. But Gordon will remain involved both as a rusher and as the primary receiver out of the backfield, scant as that job has proven to be. The Broncos also have a quarterback competition that could be disrupted if they end up trading for an elite quarterback as has been the raging rumor this offseason.

That light schedule strength is a difference maker. And it could see Williams look so good, that they increase his snaps at the expense of Gordon who will be gone in 2022 anyway. 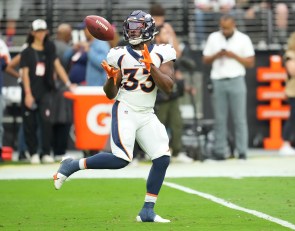