The prop bet is the unsung bet for those looking to cash in on specific players instead of whether a team wins or loses. Many times the best bets are taking the Over on an Over/Under with a team you think is going to get hammered. The Over/Under on Justin Herbert as the season went along speaks to how to ride a trend before everyone else notices. For Week 1, we just look at numbers that seem either too high or too low as we wait to see how defenses rise or fall moving forward into the season.

The problem with betting on rushing yards for Alvin Kamara during his career is that he has always had a sidekick who significantly cut into his time – whether Mark Ingram or Latavius Murray. Now he has neither, yet his opening week rushing line has an OVER/UNDER of 59.5 yards (-114 for both the Over and the Under). Without Drew Brees, Michael Thomas or Murray, I wouldn’t be surprised is Kamara gets 30 touches in some form or another. He doesn’t need a lot of rushing attempts to hit that number. Take the Over.

King of the Hill

One of the favorite weekly prop bet players is Tyreek Hill of the Chiefs. He is so over-the-top dominant deep downfield some defensive coordinators will let Travis Kelce catch 10 short passes to prevent one or two bombs to Hill. His Over/Under (82.5 yards at -114 for both the Over and Under) is about where you would expect a Hill line to be. Cleveland is going to try to take the air out of the ball with their run game, but Patrick Mahomes is going to have his deep shots dialed up for Hill, and he may need only two downfield plays to hit this number. Take the Over.

As a rookie, Justin Herbert quietly made those who bet the Over rich because he topped 265 yards 11 of the 15 games he played. His Week 1 Over/Under (260.5 at -114 for both the Over and Under) seems shockingly low. The only reason the “Washington Team to Be Named Eventually” made the playoffs last year was because it quietly had one of the most dominant defenses in the league. Herbert is going to be feeling heat on the snap like he didn’t see as often in his rookie season. He may win the game, but Take the Under.

Let’s Go To the Hop

The Arizona Cardinals are going to be playing in Tennessee on West Coast Body Clock time, which historically isn’t good. The Cards are a trendy pick to be a come-up team this season – all four teams in the NFC West are legitimate playoff contenders – but going into Tennessee at 10 a.m. Arizona time doesn’t sound like a team hitting on all cylinders. DeAndre Hopkins has a legitimate Over/Under (84.5 yards at -114 for both) that will take some doing to meet. But, this is a game that should heavily favor Tennessee to control the tempo and require the Cardinals to throw a lot. If Kyler Murray is going to throw a lot, Hopkins has to be the first look more times than not. Take the Over.

Harris of the Dog

The Pittsburgh Steelers had an embarrassment of riches in the Le’Veon Bell years. He was a three-down back who could hurt you a lot of ways. But, after a bitter divorce a couple of years ago, the Steelers invested a first-round pick – a franchise rarity – to take Najee Harris. The door is wide open for him to be “The Man” from Day 1. He has a modest Over/Under (62.5 yards, -125 Over, -103 Under). On the road at Buffalo is far from a guarantee of ground success, but Harris is going to likely get 15 or more carries, which should easily state his case. Take the Over. 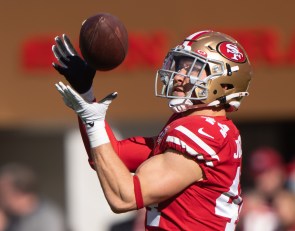